Outdoor advertising—also known as billboard ads—has a local origin. Walter Foster was born in Vallejo in 1871 and George Kleiser was born in Oakland in 1874. The two met in San Francisco, became friends, and in 1898, established an organization that formalized the placement and the management of outdoor advertising—Foster & Kleiser Company. The two friends soon turned outdoor advertising into a highly successful, organized business model, establishing Portland, Oregon and Seattle, Washington as their first territories by 1900. 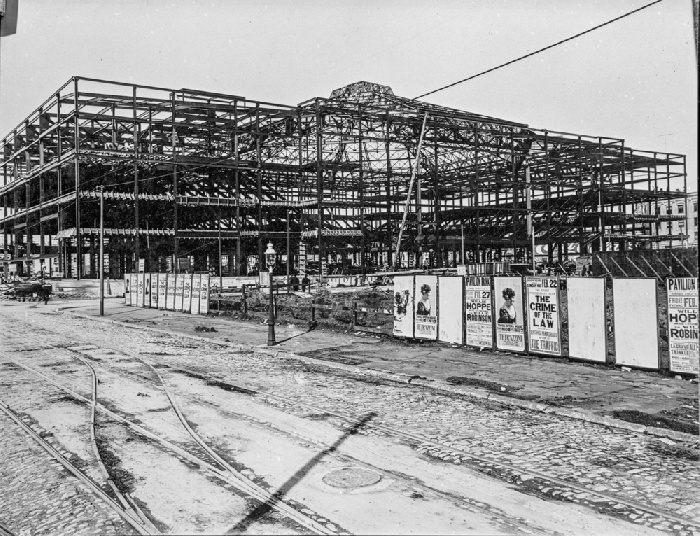 In the early days, such advertising often involved little more than printed posters being pasted randomly onto walls and fences—often with little regard for the property rights of others.

Given the growth of automobile sales in the US in the early years of the 20th century, outdoor advertising had the potential to reach increasingly large numbers of consumers all day, every day. Ads were strategically positioned so that those who were passing by in their new cars had an easy opportunity to view examples of the latest products and services available to consumers.

Multiple advertising companies approached property owners and offered payment for that provided for exclusive access to their property, with specific rental terms and timeframes. With advertising companies paying consistent fees to property owners, the advertisers themselves could then sign up for long, medium, or short terms for their ads—a financially beneficial arrangement for all.

Foster & Kleiser quickly expanded and soon became the dominant provider of such services to the business community up and down the west coast, acquiring smaller firms, and soon maintaining a strong presence in San Francisco, as billboard advertising soon covered the urban and rural landscapes. That particular business model began fading from the scene as the U.S. Interstate highway system was developed beginning in the mid-1950s which forbade freeway-adjacent billboards on newly-built roadways. Local restrictions on outdoor advertisements also began to emerge as part of the Market Street beautification plans that were associated with BART/MUNI construction beginning in the mid-1960s.

Here are some examples of the variety of outdoor advertisements that once appeared in neighborhoods all across the City: 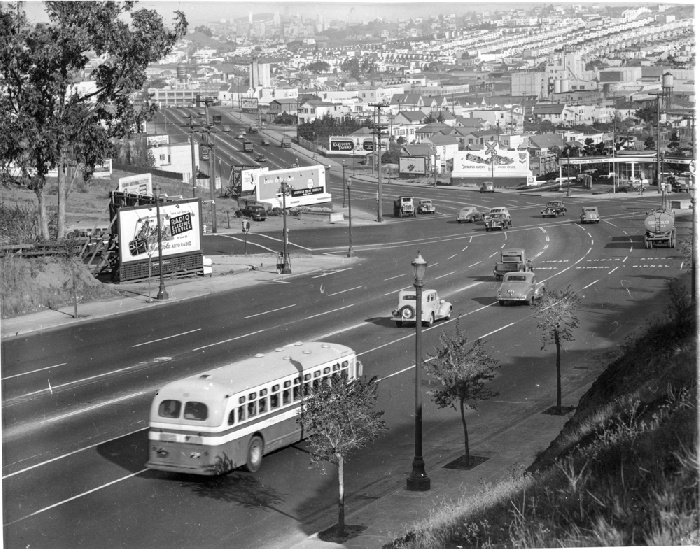 BAYSHORE: More than a dozen billboards dotted the route into San Francisco at the intersection of Bayshore Boulevard and Third Street on January 10, 1947. Highway 101 now runs through this area. 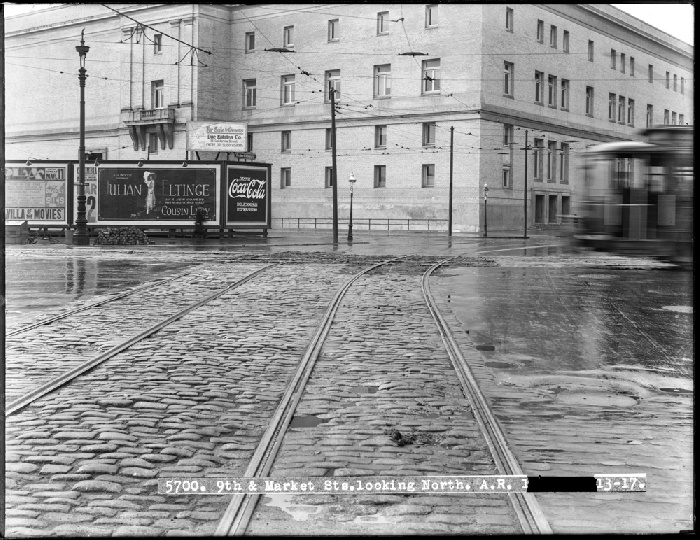 CIVIC CENTER: As outdoor advertising was beginning to take on a more formalized approach with sturdily constructed frames, electric lighting began to be added to many displays, including this group of signs at Ninth & Market Streets in 1917. 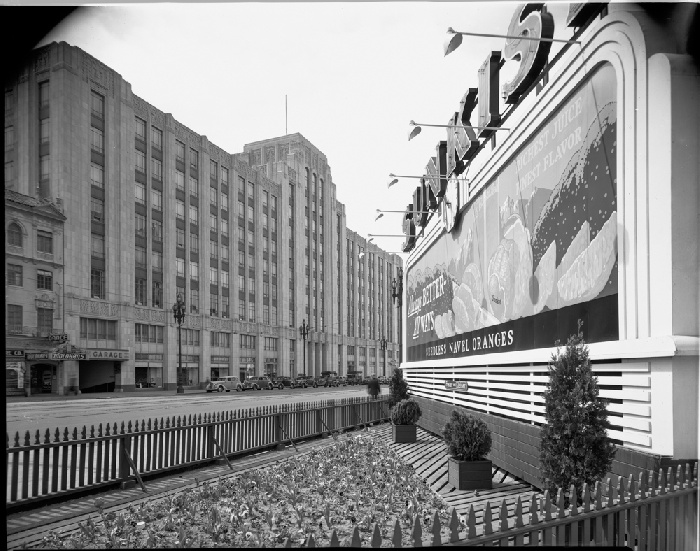 That same corner was upgraded by September 1938 to include a new, larger single display (then promoting Sunkist Oranges), complete with a row of spot lights plus a fenced and landscaped foreground. This location was adjacent to the parking lot that served the late, great Fox Theatre (1929-1963). 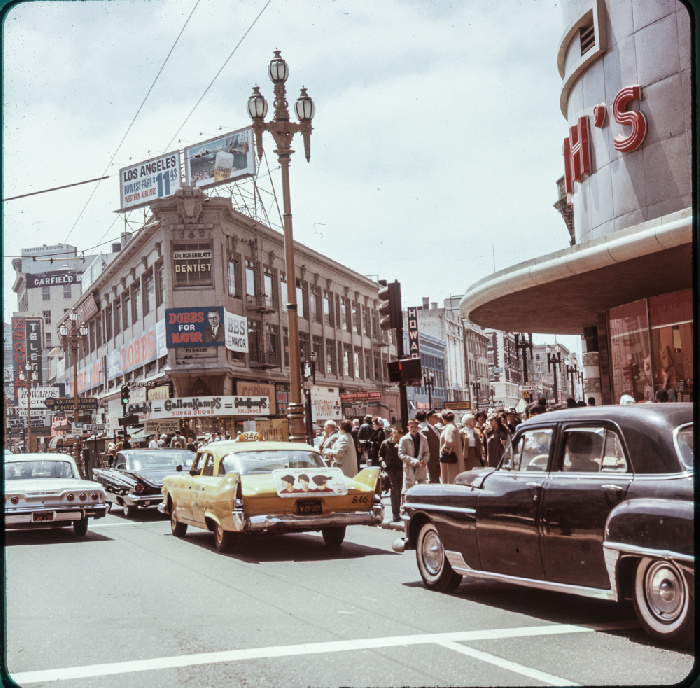 Billboards on and atop buildings at Powell and Market, 1963. (wnp25.4240; Courtesy of a Private Collector)

DOWNTOWN MARKET STREET: The building at Market, Powell, and Eddy Streets was demolished in the mid-1960s for construction of Hallidie Plaza. At the time of this 1963 image, it sported airline and beer ads on the roof, Dobbs for Mayor signage at 2nd Floor level, and Corina Cigar ads on ground floor. Note an additional mini-billboard on the cab’s trunk. 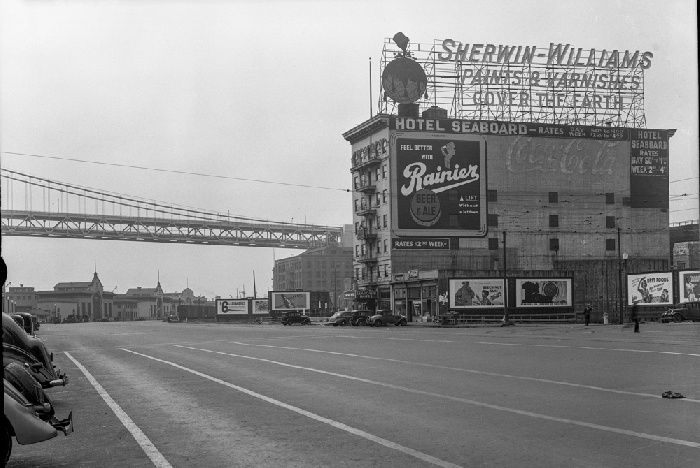 EMBARCADERO: The area adjacent to The Embarcadero featured a mixture of advertising designs—from ads painted on the sides of buildings, to free-standing billboards, to massive rooftop displays. In the World War II era, some of these began featuring eye-catching lighting. 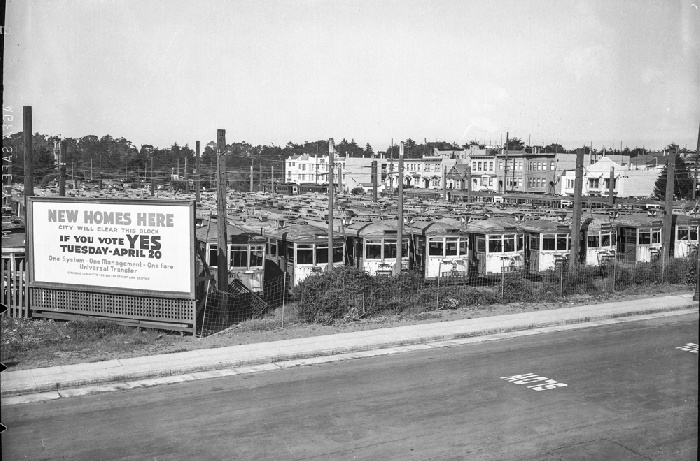 Billboards at streetcar boneyard at Irving and Funston, 1943. (wnp14.3236; Courtesy of a Private Collector)

INNER SUNSET: Voters approved a consolidated public transit system in April of 1944, and a mere 15 years later, this entire block was redeveloped into a grocery store facing Irving Street (Park & Shop, later Andronico’s) with a 3-story apartment complex facing Golden Gate Park at the far north end of the lot. 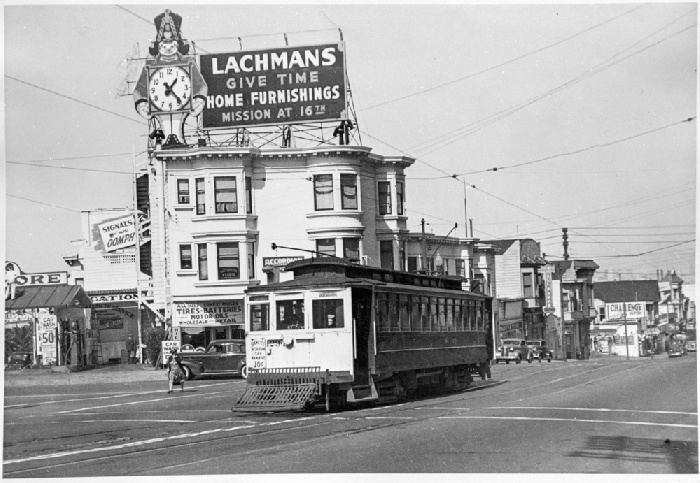 Lachmann’s billboard on top of building at Randall and Mission, circa 1940. (wnp67.0540; Jack Tillmany Collection / Courtesy of a Private Collector)

MISSION: Lachman Brothers Furniture, located at 16th & Mission Streets, had a number of similar clock signs in multiple locations. This one was located at Mission Street and Randall Avenue, where Bernal Heights adjoins the Mission District, circa 1940. 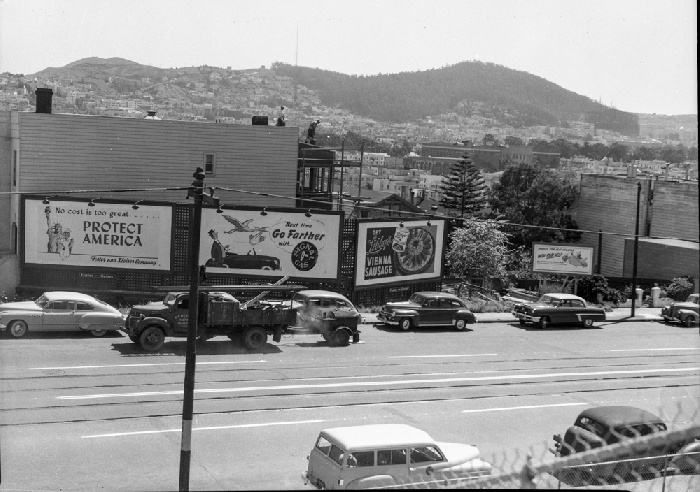 Billboards lining south side of Turk Street near Lyon, circa 1953. (wnp28.1085; Courtesy of a Private Collector)

NORTH OF PANHANDLE: In an era when San Francisco had many unbuilt lots, outdoor advertising was a frequent presence in many neighborhoods. Here is a row of billboards lining the south side of Turk Street near Lyon, circa 1953. An apartment building has long since occupied the site.

RICHMOND: This Ocean Beach advertisement for Kelly Tires, circa 1916, was well situated for a heavy traffic area, and may have contributed to the popular place name Kelly’s Cove. 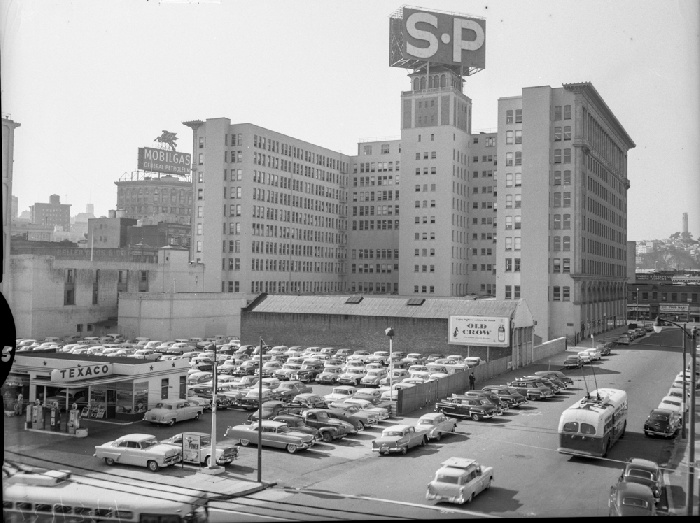 SOUTH OF MARKET: Southern Pacific Company installed a large neon-lighted sign atop the headquarters building in 1954, but the public regarded it as an advertising eye-sore and the company removed it a few years later. Note Mobil Gas rooftop ad featuring “Winged Mercury” at left and traditional billboard for Old Crow bourbon in lower foreground. 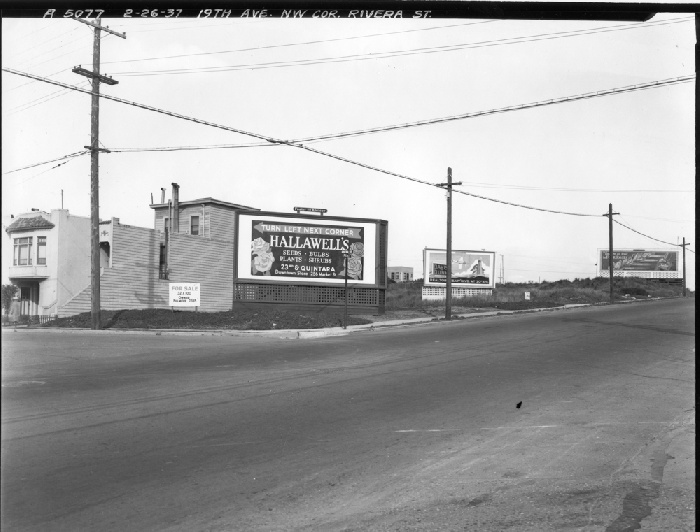 SUNSET: Multiple billboards dotted the undeveloped lots along 19th Avenue—shown here on the west side of the street near the corner of Rivera in February of 1937 before the roadway was widened as part of California Highway 1 circa 1940. 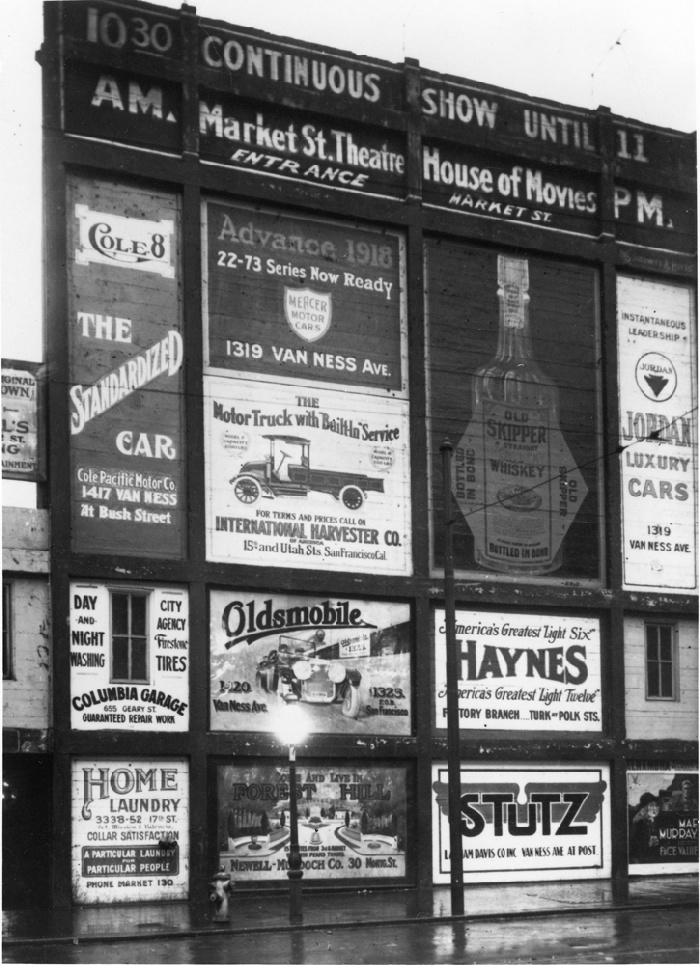 TENDERLOIN: This large sturdy display, with space for more than a dozen changing advertisements, appeared facing Eddy Street on the back wall of a downtown theatre in January 1918. 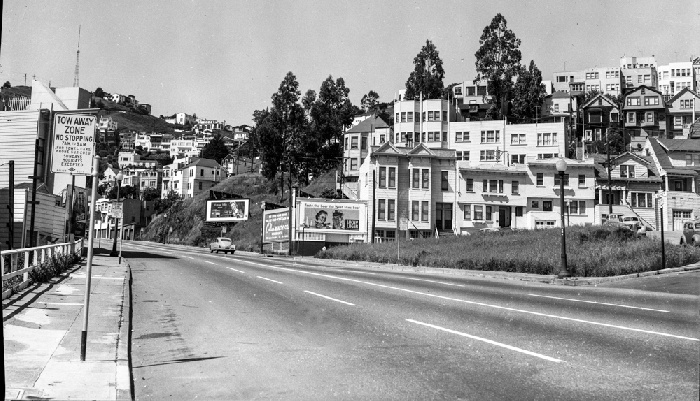 Billboards along Market Street at Merritt, 1953. (wnp28.1088; Courtesy of a Private Collector)

TWIN PEAKS: Billboard advertising on Upper Market Street, shown here in 1953, disappeared when the roadway was divided and widened a few years later. 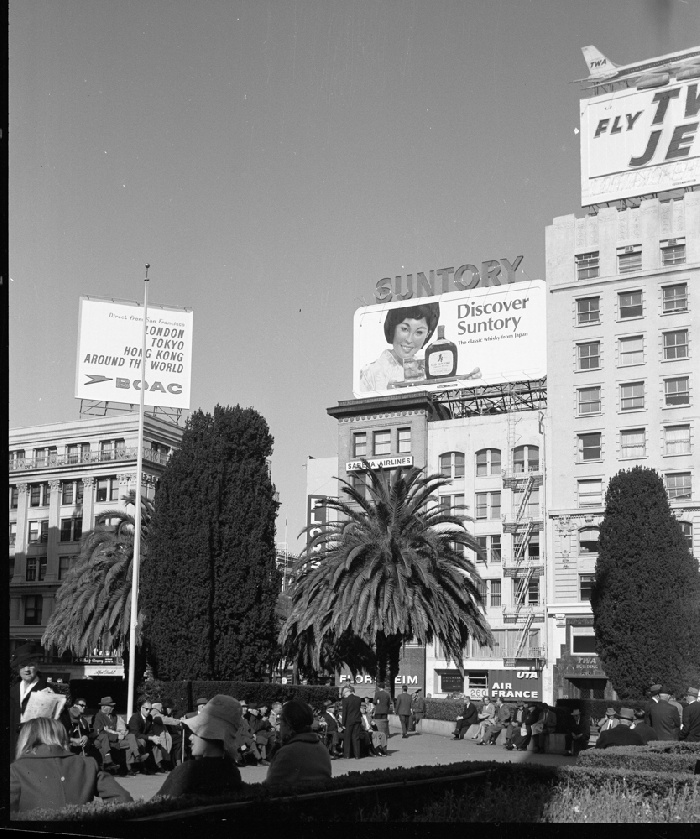 Billboards atop buildings around Union Square, circa 1965. (wnp14.11964; Courtesy of a Private Collector)

UNION SQUARE: The east side of Union Square above Stockton Street was home to these and several more outdoor rooftop advertising displays, circa 1965. Today, the area is still home to a handful of such ads—often airline-related. 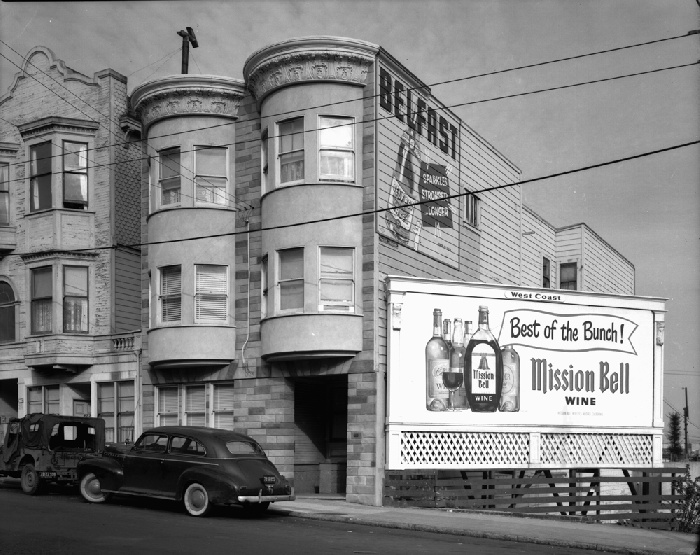 WESTERN ADDITION: Presidio Avenue near Sacramento Street, 1951. Sometimes advertising was painted onto the exposed sides of larger buildings—both commercial and residential—after payment to the building owners. Circa 1960, the billboard site became home to a motel, now known as the Laurel Inn.

WEST OF TWIN PEAKS: In the post-World War II era, Marin Town & Country Club in Fairfax placed a dozen memorable billboards like this in and around foggy areas of San Francisco in order to encourage residents to venture north into the sunshine. Sadly, the popular resort was closed after the 1972 summer season. 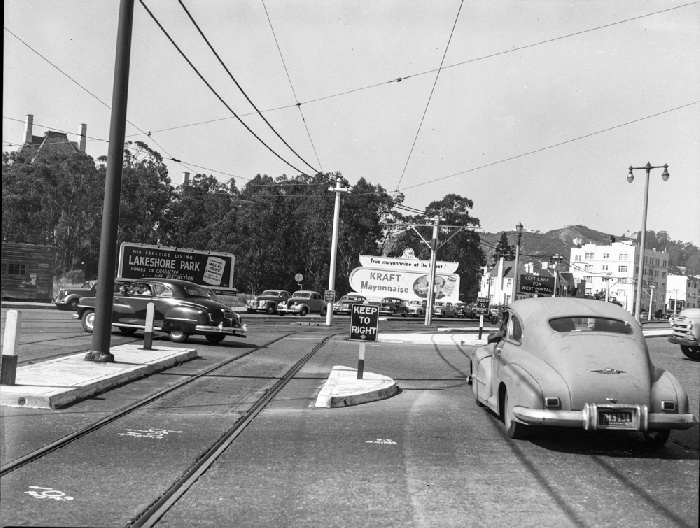 WEST PORTAL: Lighted display ads for Lakeshore Park homes and Kraft Mayonnaise once greeted northbound motorists at the busy 5-street intersection of Junipero Serra Boulevard, Sloat Boulevard, West Portal Avenue, Portola Drive, and St. Francis Way in 1953. The area behind the billboards was developed by Pacific Telephone as a Directory Assistance office in the early 1970s, and that building was later transformed into the campus for San Francisco’s private Waldorf High School in 2007.