March 8, 2021 marks the 155th anniversary of the passage of what was colloquially known as the Outside Lands Act of 1866. Before the act, San Francisco’s western border was at approximately Divisidero Street. Under this legislation, the federal government ceded the Outside Lands to San Francisco and the western border was extended to the Pacific Ocean. To celebrate the 155th anniversary of an “enlarged” San Francisco, we’re taking a look at our Top Ten images showing what the City looked like in 1866. 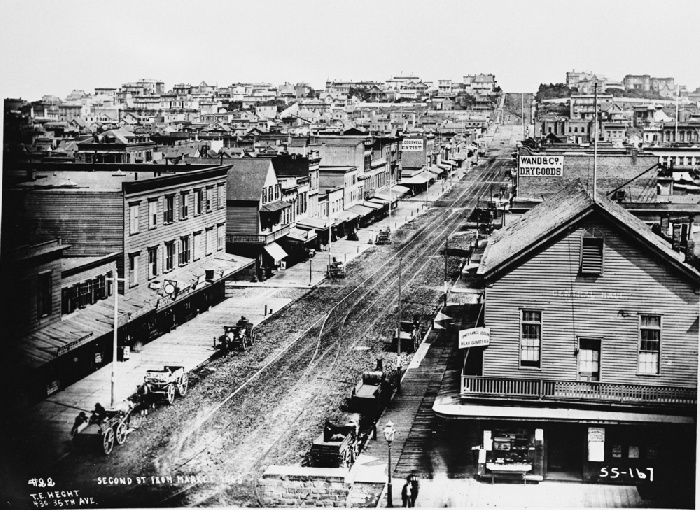 We start by looking down 2nd Street from Market in June 1866. The street is lined with shops and signs can be seen for dry goods and a dentist. What we like is the sight of all the horse-drawn carriages parked like cars on each side of the street. In the background, you can see many buildings atop Rincon Hill. At this point, San Francisco is officially 16 years old as a California city and this south of Market area is clearly bustling. 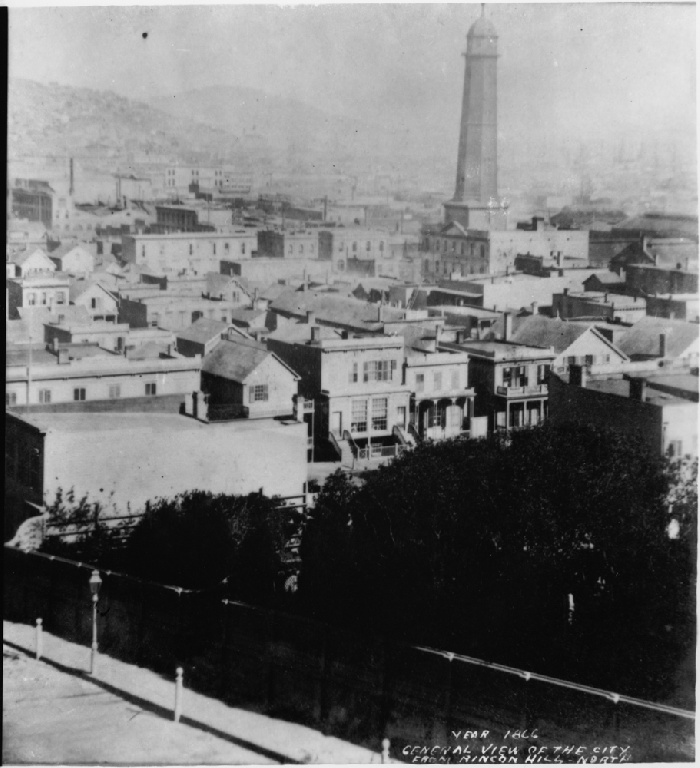 Northeast of Rincon Hill once stood the Selby Shot Tower. Built by Thomas Selby, who would later become mayor, the shot tower was used to produce spherical gunshot. Located at 1st and Howard Streets, it was a well-known landmark in 1866. 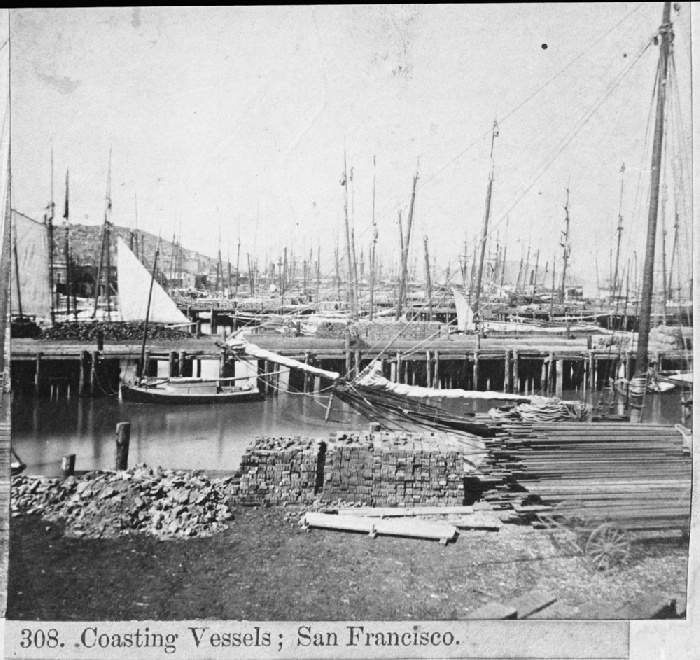 Along the southern waterfront in 1866, we see a mass of docks and ships in the Mission Bay area with Telegraph Hill in the background. In the early days of the City, ships were often abandoned at the docks after arrival. Some ships became part of the landfill as San Francisco “expanded” in the waterfront area. Close to 20 years after the Gold Rush of 1848, many ships were still arriving in 1866. 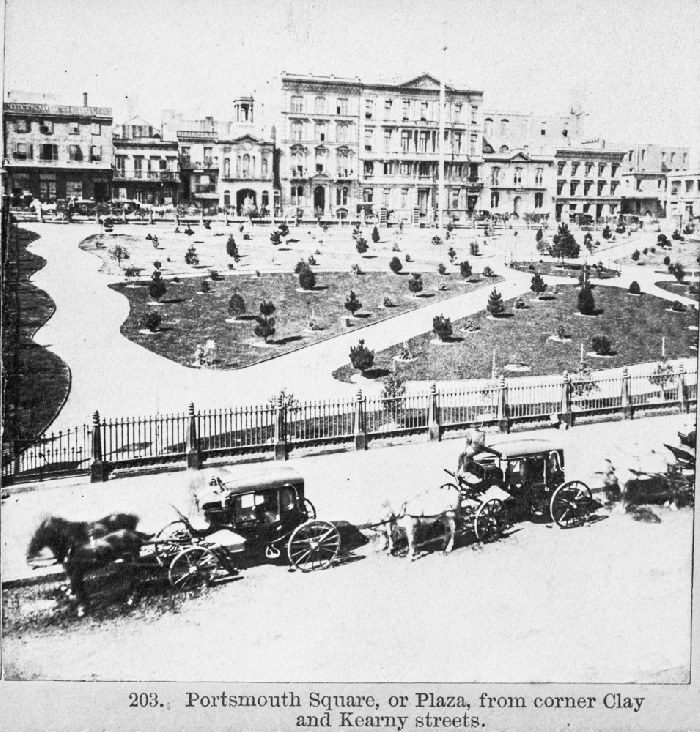 We head north to Portsmouth Square, which predates the State of California. When San Francisco was under Mexican rule, they established it as a public gathering spot and it became an official plaza in 1835, in effect, the first public park in the City. The plaza hosted the first Admission Day ceremony in 1850 when California became a state. As seen here in 1866, it had been landscaped into a beautiful park. 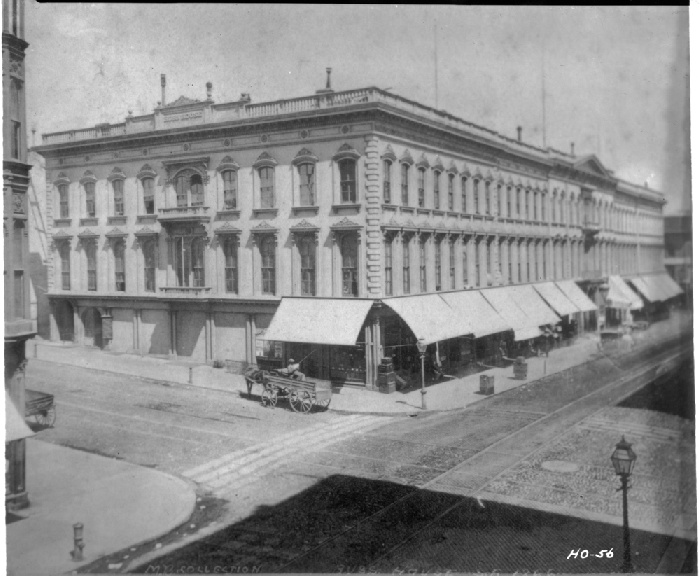 Filling an entire city block bounded by Montgomery, Bush, Kearny & Pine Streets stood the Russ House, the first of San Francisco’s grand hotels in 1866. Built by Christian Russ, who made his fortune with a jewelry store and assay office, it was completed in 1862. It would be replaced in 1927 by the Russ Building, a 32-story office tower that was the tallest building in San Francisco upon its completion until 1964. 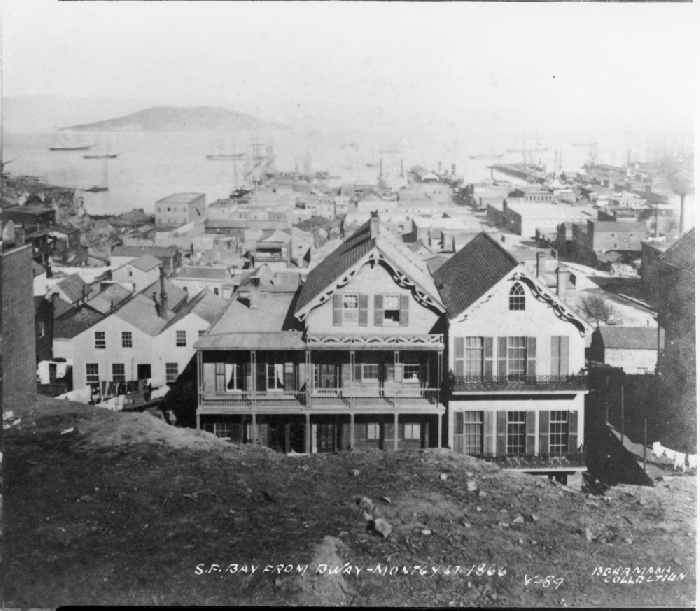 Much of the most crowded part of San Francisco in 1866 was along the waterfront as seen here from Broadway and Montgomery Streets. In the foreground, you can see some Carpenter Gothic homes. It would be over 70 years before the Bay Bridge would span the Bay to Yerba Buena Island seen in the background. 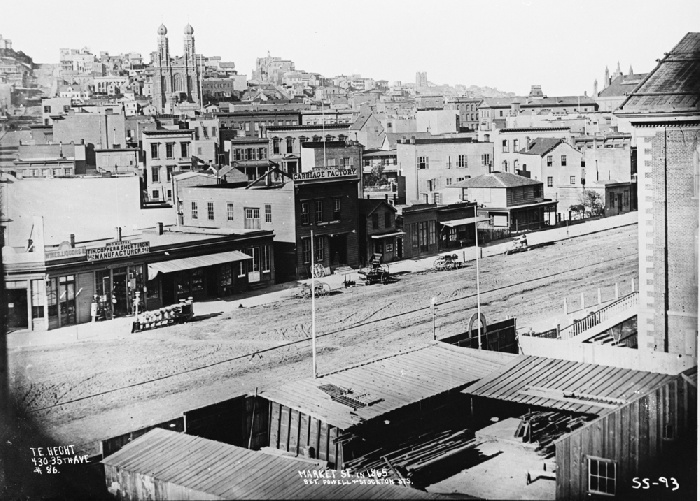 Nob Hill was well-settled by 1866 as this image looking north from Market Street near Powell Street shows. In the distance in the center, you can see the grand Temple Emanu-El on Sutter near Powell. It was completed in 1864 to serve a mostly German Jewish community in the City. The fires after the 1906 earthquake would damage the inside of the Temple, but it would get rebuilt and remain in service until a new Temple on Lake Street was dedicated in 1926. 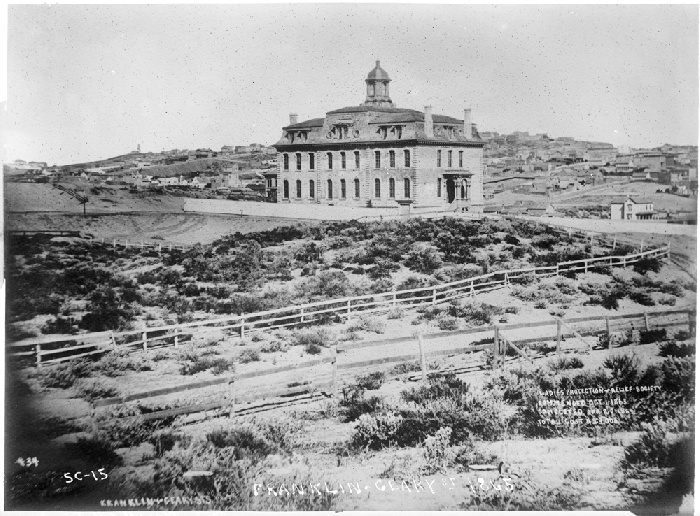 In 1853, three San Francisco women formed the Ladies Protection and Relief Society to help less fortunate women. About 10 years later, they began building a care home at Franklin and Geary Streets. Completed in April 1864, this is what it looked like in 1866. Before the Outside Lands Act of 1866, this was close to the western boundry of the City. 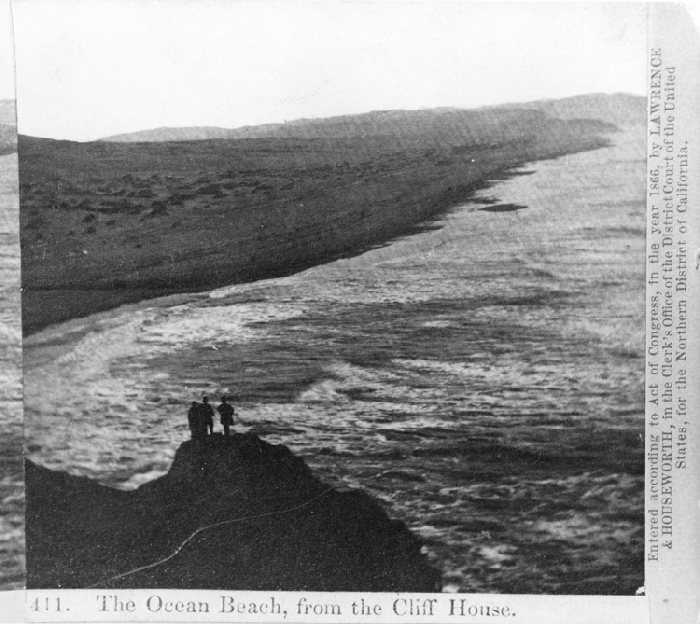 So what of the west side of San Francisco newly added in 1866? There was little to be found then. In this image looking south along Ocean Beach from the Cliff House, there are no buildings and no Golden Gate Park. There is nothing but sand and scrub brush for as far as the eye can see. At this point in time, San Francisco was still four years away from even beginning to build the Park, much less starting to see the results of tree and grass planting. 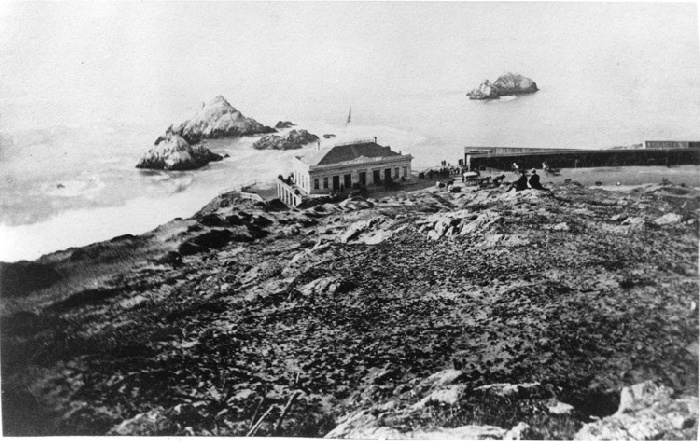 View of Cliff House from Sutro Heights as it was later known, 1866. (wnp4.0461; Lawrence & Houseworth, photographers / Courtesy of a Private Collector.)

Speaking of the Cliff House, it was one of the few operating businesses in the Outside Lands in 1866, having opened three years earlier. Senator John Buckley and C.C. Butler build this Cliff House and leased it to Junius G. Foster. The Point Lobos Toll Road opened a year later making the Cliff House a popular weekend destination. Soon the beach waterfront would begin to be built up as San Franciscans flocked to the ocean waterfront that was now within city limits. However, in 1866, it was still mostly just a vast sandy expanse.

Many of the above images were sold by George Lawrence and Thomas Houseworth, who ran an “optical” shop in San Francisco. Like many, they came to California for the Gold Rush before settling in San Francisco. They began acquiring and selling stereographs in 1859. We hope you’ve enjoyed this trip back in time as we celebrate the 155th anniversary of San Francisco’s extension to sea in 1866.