From the Summer of Love to the present day, San Francisco has been a musical focal point spawning many great musicians and becoming the center of an emerging social and political conscience in the music scene. Upon his return from Vietnam, where he served in the Navy, native San Franciscan Greg Gaar became a photojournalist and began documenting the local cultural and natural landscape. Among his subjects was the Bay Area music landscape and from 1972 to 1989, he took thousands of photos of many bands at many venues. The OpenSFHistory.org image archive now includes over 1000 of these indelible Greg Gaar music photos, that are searchable by artist, venue, or date. To get you started, I’m highlighting ten of my favorites from these images. 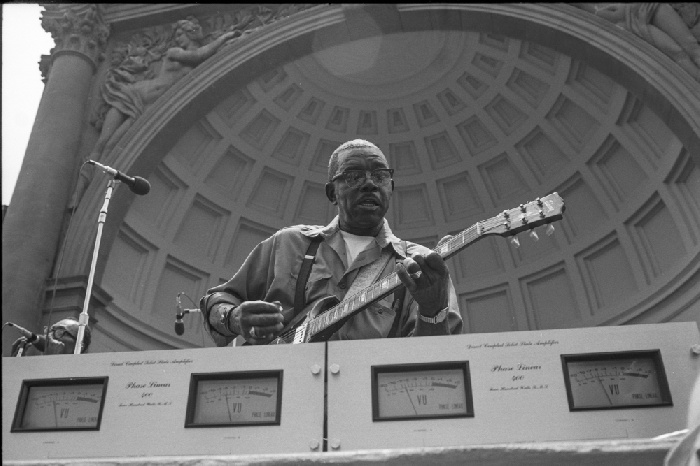 The San Francisco Blues Festival was one of the longest running blues festivals in the country occurring annually from 1973 to 2008. The second SF Blues Fest featured, among others, local blues legend K.C. Douglas, who had been performing since the late 1940s. At the foot of the stage, Gaar got this amazing shot of Douglas framed by the half-dome of the bandshell, metaphorically placing Douglas with the blues gods. 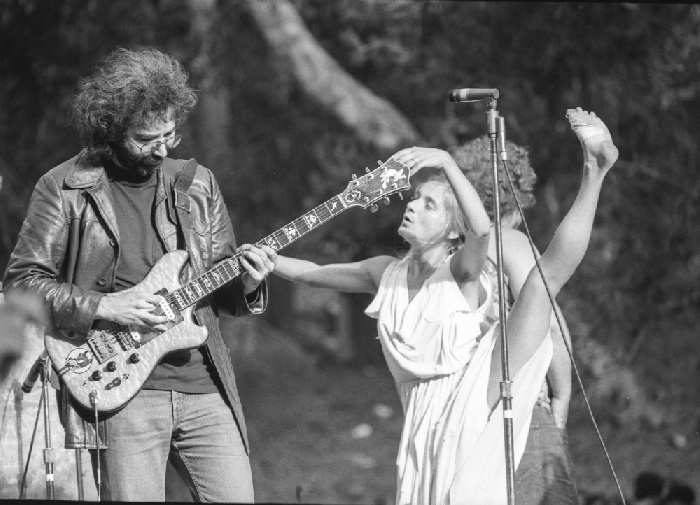 In addition to the Grateful Dead, Jerry Garcia also had an eponymously-named band that he initially just performed with, but later also recorded with. On Labor Day 1974, the Jerry Garcia Band was still in its nascent stages when they performed–I assume for free–in Marx Meadow. In addition to the musicians, they had dancer Renee LeBallister groove on stage with them. In this perfectly timed and placed photo, LeBallister arms appear to be an extension of Garcia and his guitar. It’s as if the energy from Garcia’s guitar is lifting LeBallister’s leg as high as it can go. 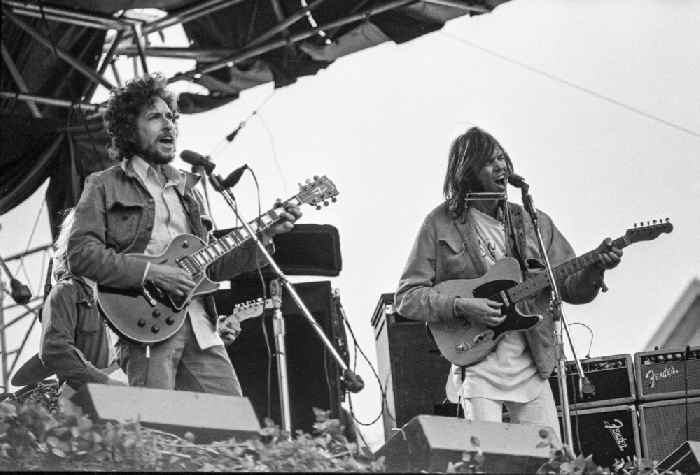 Because of financial issues, San Francisco schools announced in early 1975 that budget cuts would require the elimination of some after school clubs and sports. Bill Graham was having none of that and organized a fund-raising concert at Kezar Stadium called Students Need Activities, Culture, and Kicks, S.N.A.C.K. for short. The show featured local favorites like the Grateful Dead, Santana, Jefferson Airplane, the Doobie Brothers, and Tower of Power. However, the highlight was a one-time only collaboration of Bob Dylan, Neil Young, and The Band. Among the many images Gaar took at this show is this one of Dylan and Young singing together during their set. 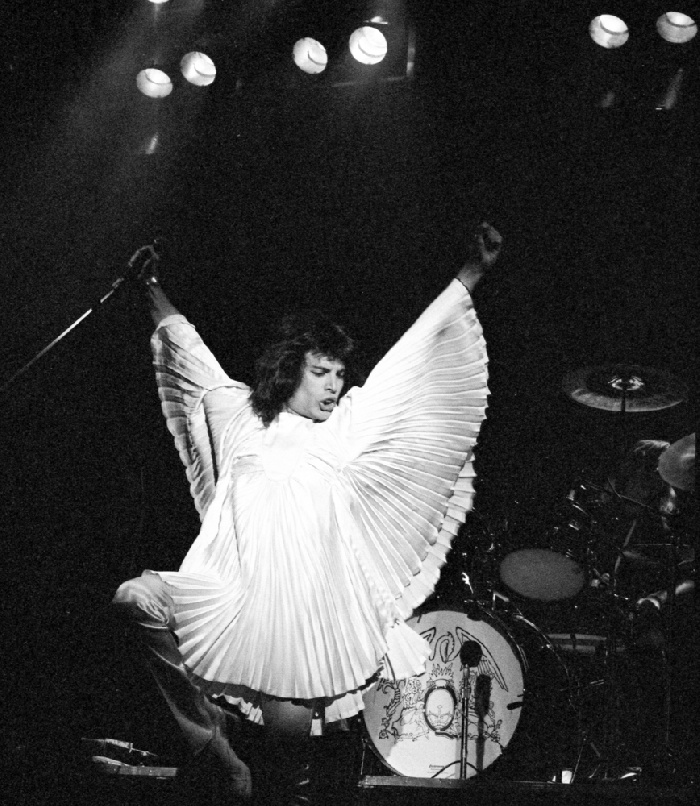 In early 1975, Queen was riding high with their first U.S. top 40 hit, Killer Queen, from their third album, Sheer Heart Attack. In January of that year, they began their first U.S. headlining tour. When they came to San Francisco in March, Bill Graham booked them into his Winterland venue. Queen shows were noted for Freddie Mercury’s flamboyant outfits and frequent costume changes. At the Winterland show, Gaar caught this “angelic” moment from Mercury. 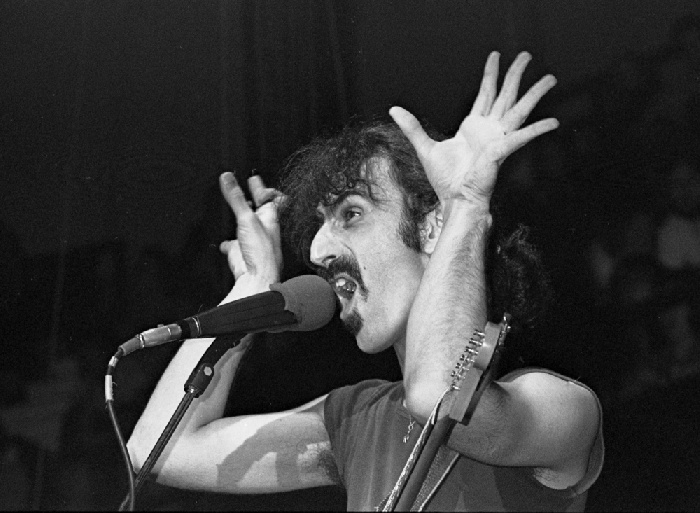 Later, in December 1975, Frank Zappa also came to Winterland. Zappa’s music spanned genres and his stage shows with the Mothers of Invention incorporated experimentation and improvisation like few other bands could. Zappa was also noted for the frequent satirical nature of his lyrics. Although this is an image and not a sound recording, Gaar captured the spirit of Zappa perfectly in this photo. 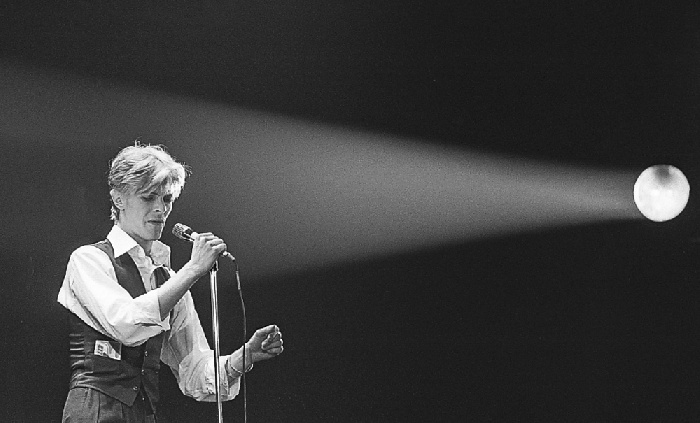 David Bowie’s stage persona and music in the early days were an ever-evolving rapture of styles from the acoustic folk rock of Major Tom to the glam rock of Ziggy Stardust. With the release of Station to Station in 1976, Bowie entered the Thin White Duke phase of his career. The subsequent tour featured a sparsely lit stage that created a lounge atmosphere even in large venues. This image that Gaar took of Bowe lit by one spotlight has a moonlight quality to it that perfectly illustrates the Thin White Duke. 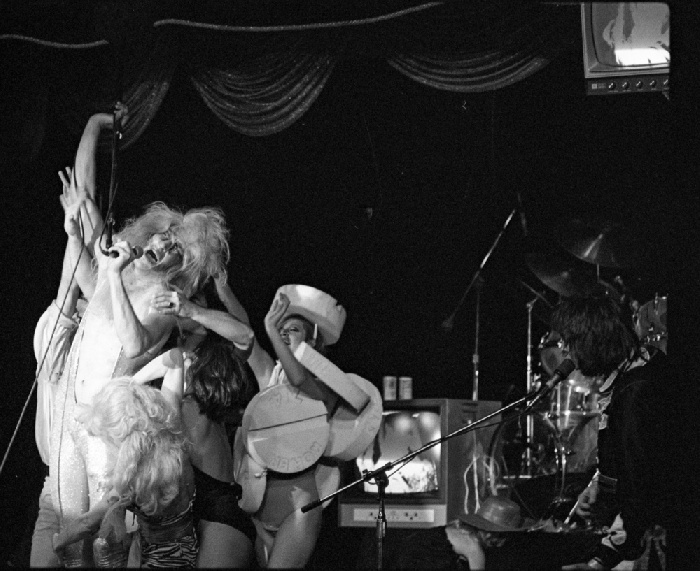 If you’ve never experienced the glorious insanity of a Tubes show, this Gaar image gets you pretty close. During shows, lead singer Fee Waybill adopted various identities and costumes and films for each song were displayed on a live video feed. Here, we see Waybill as his alter ego, Quay Lewd, surrounded by costumed dancers, perhaps performing their then hit, White Punks On Dope, if the pill-covered costume of one of the dancers is any indication. The band became a cult favorite with these extravagant shows. 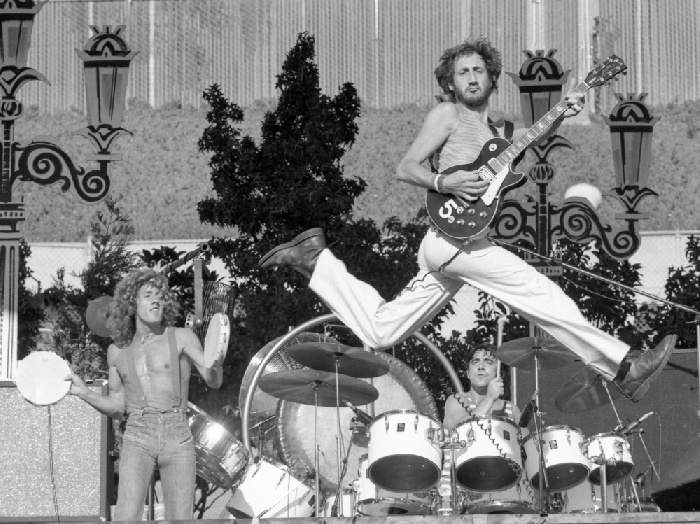 In 1973, Bill Graham held the first of his Day on the Green shows at the Oakland Coliseum, featuring multiple musical acts. Over the next 20 years, these Days on the Green were a summer music staple of the Bay Area. In 1976, there were 10 Day on the Green productions, culminating in two nights with The Who and the Grateful Dead on October 9th and 10th. Gaar was there to capture this image of Pete Townshend flying high with Keith Moon and his drum set framed beneath him. To the left, Roger Daltrey with some tambourines looks like he has just walked off the Tommy movie set. This exquisitely encapsulates the energy of The Who. 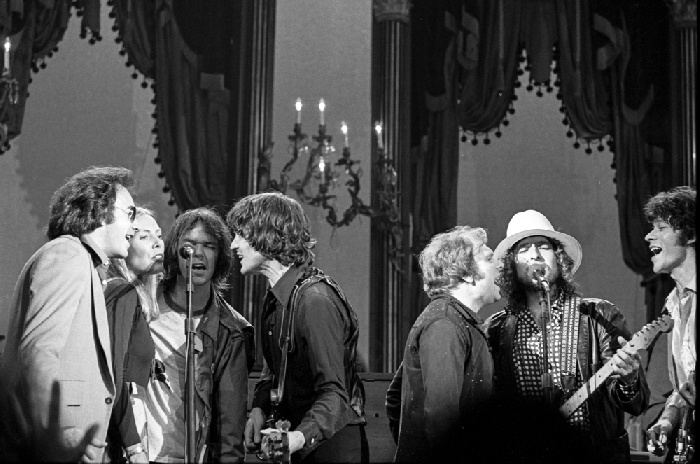 The Band and special guests at their Last Waltz performance at Winterland, November 25, 1976. (wnp73.1657; Courtesy of Greg Gaar.)

How much rock royalty can you get to perform on one stage together? At their Last Waltz Winterland concert, The Band brought together numerous legendary friends for the show that was being filmed by Martin Scorsese. Gaar was there for the show and shot this picture of, from left to right, Neil Diamond, Joni Mitchell, Neil Young, Rick Danko, Van Morrison, Bob Dylan, and Robbie Robertson. Scorsese’s film, The Last Waltz, would become one of the most critically-acclaimed music documentaries of all time. 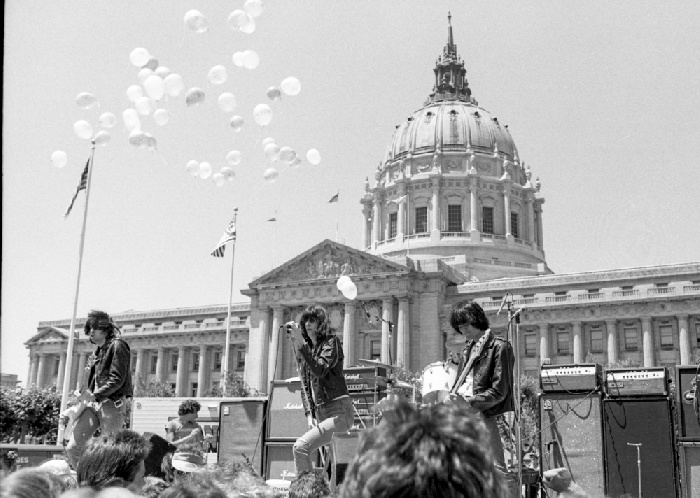 On June 8, 1979, punk legends, the Ramones, showed up at San Francisco’s Civic Center to put on a free show. Known for their fast, short songs, the Ramones ripped their way through 27 songs in front of City Hall to a delighted crowd. At one point, some balloons got released and Gaar caught the moment with the band and their backdrop, making for an ironic photo. An anti-establishment band in front of the local seat of government as a ceremonial balloon release happens. We don’t really know why the balloons were released–it could have been accidental–but the juxtaposition in this photo is lovely.

We hope you’ve enjoyed this short visit through the Greg Gaar music photos that have been newly added to OpenSFHistory.org. There are plenty more in the collection, so take a deep dive and enjoy.