Despite being one of the most populous cities in the United States, San Francisco has a surprisingly small freeway imprint. Further, unlike most other large cities, San Francisco has eliminated some of its freeways since the heyday of interstate construction in the 1950s. One freeway in particular drew scorn as soon as it started to be built. The Embarcadero Freeway was so hated that San Francisco prevented the original plan from being fully completed and then worked for a long time to get rid of it. 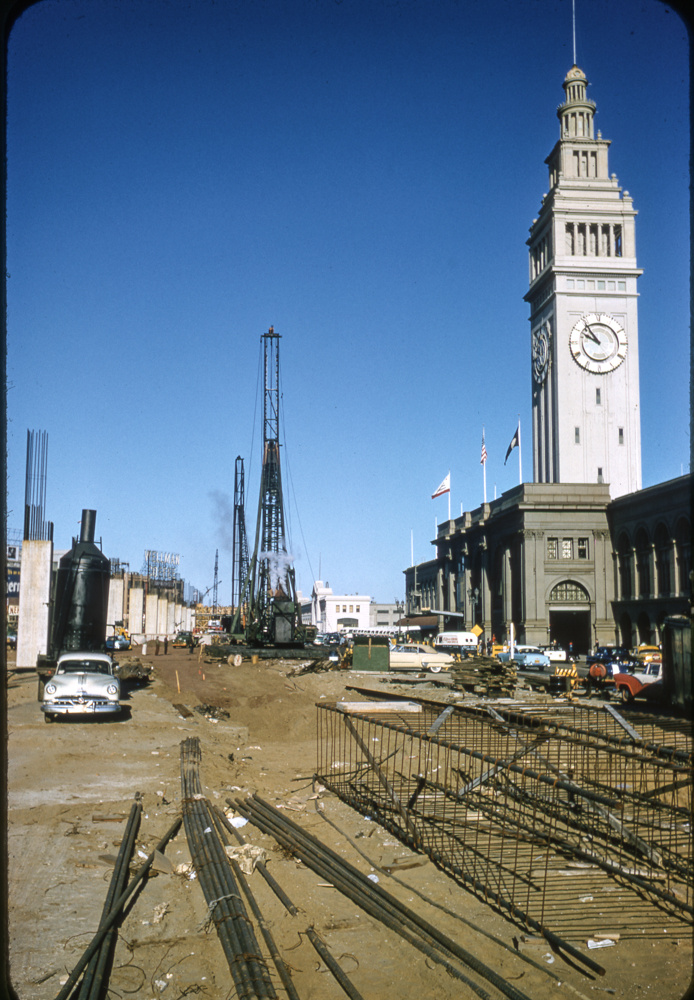 The original idea was to connect the Golden Gate Bridge and the Bay Bridge with a freeway.1 Plans were discussed in 1951 to have a freeway run from the Bay Bridge around the Embarcadero, down Bay Street, and tunnel under Russian Hill, where it would meet up with Lombard Street at Van Ness. On August 21, 1952, the State approved a $45,000,000 proposal to build this Embarcadero Freeway.2 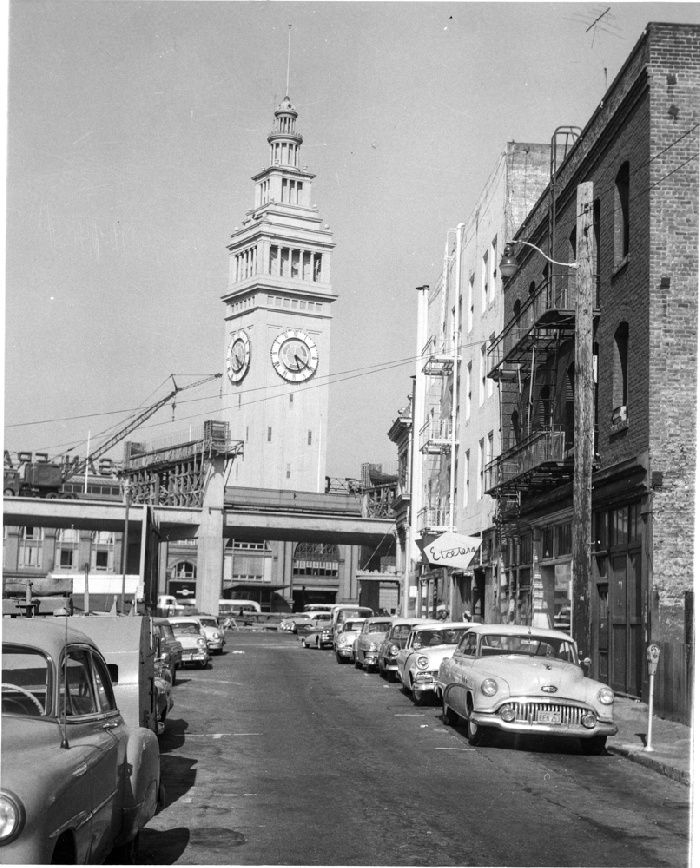 Construction of Embarcadero Freeway by Ferry Building from Sacramento near Drumm, circa 1957. (wnp4.1375; Courtesy of a Private Collector)

This route was initially designated as Legislative Route 224 and added to the new Interstate Highway System on September 15, 1955. It received the Interstate designation of I-480 on November 10, 1958. The other part of this ambitious freeway plan was to extend the central freeway north to meet up with the Embarcadero Freeway after it tunneled under Russian Hill. 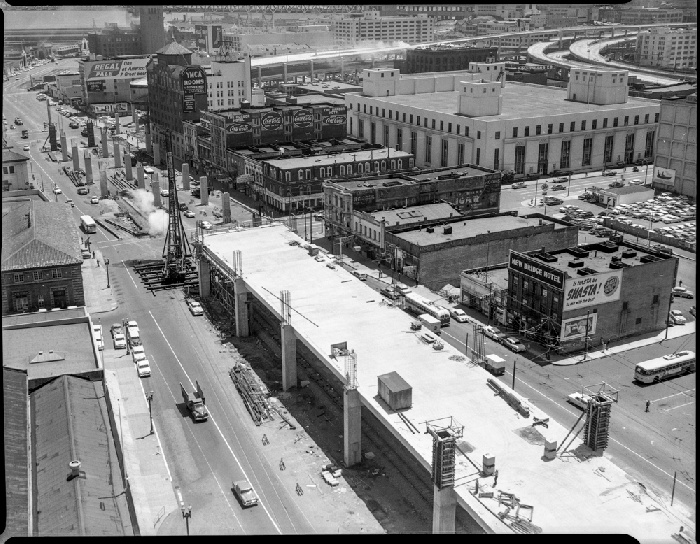 The first part of this plan was the construction of the Embarcadero Freeway from the Bridge to Broadway, which was approved by the California Highway Commission in early 1953.3 This allowed land to be purchased along the route, though some complained that this was forcing some businesses out of the City.4 In March 1955, the contract to start work on the new freeway was awarded to McDonald, Young, and Nelson, Inc. and Morrison-Knudsen Co.5 Even before ground broke, however, there were rumblings that the public was not happy about a double-decker freeway down the Embarcadero.6 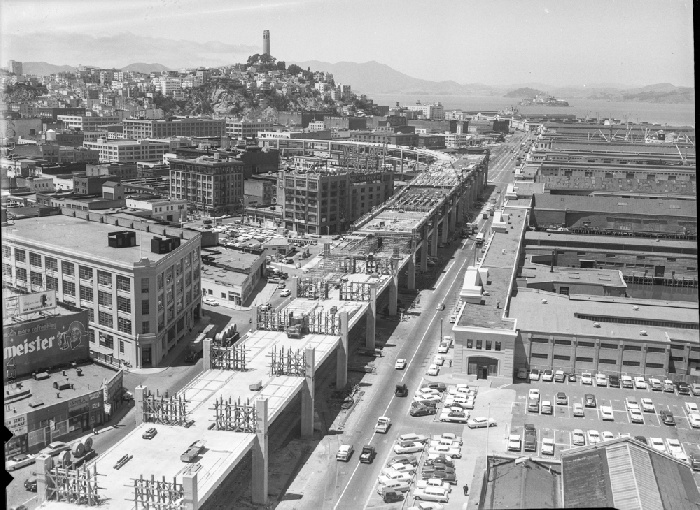 Construction of Embarcadero Freeway along Embarcadero, July 1958. (wnp14.3114; Courtesy of a Private Collector)

Work began first on the ramps from the Bay Bridge to the Embarcadero Freeway. Even though construction had begun, the City was still working out issues on the proposed route of the freeway because of a possible impact on a planned state park by the Ferry Building.7 Public hearings were held and the issue spawned many a letter to the editor. A proposal to move the freeway underground before it reached the Ferry Building was abandoned because of the cost.8 By the end of 1957, towers for the freeway structure were going up in front of the Ferry Building.

While it was being built, the Embarcadero Freeway would regularly be described in the local papers with such adjectives as atrocious and hideous. With construction moving forward, a fight began over a proposal to ban billboards along the roadway so as not to further obstruct views.9 Loud opposition to the entire San Francisco freeway plan led the Board of Supervisors to eliminate much of the plan on January 26, 1959.10 Thus, before the sections along the eastern waterfront were even finished, the plans to extend it to the Golden Gate Bridge were already dead. Shortly thereafter, on February 5, 1959, the Embarcadero Freeway opened to traffic.11 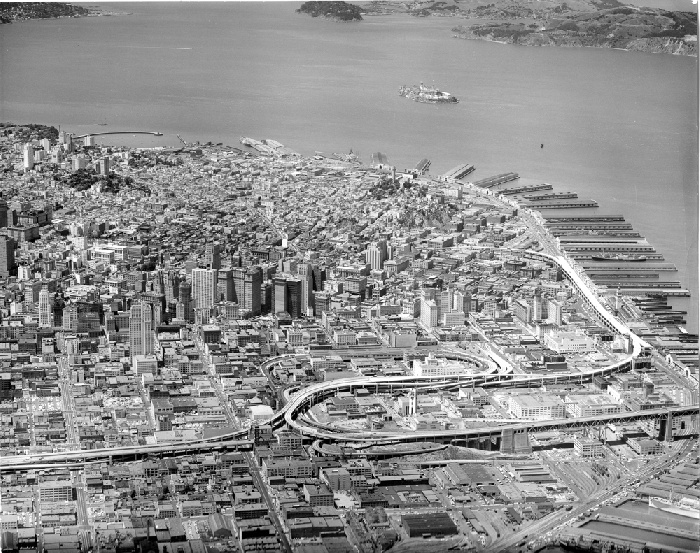 Aerial of Embarcadero Freeway and downtown, 1960. (wnp27.7879; Moulin / Courtesy of a Private Collector)

Immediately, the complaints came pouring in about the new Embarcadero Freeway. Newspaper icon Herb Caen called it an eyesore that made traffic even worse on Broadway.12 Barely a month after it opened, it was announced that part of the new freeway would be closed for up to six months to build a new offramp that officials hoped would ease the burdens on traffic caused by it.13 The Chronicle, which had opposed it before it was built, was soon editorializing for the Embarcadero Freeway’s demolition.14 In a speech to the American Institute of Architects (“AIA”) on September 15, 1959, Mayor George Christopher said the Embarcadero Freeway was “a regrettable phase of our freeway construction.15” Several months later, the national president of the AIA would later declare that the freeway had done “irreparable damage” to San Francisco.16 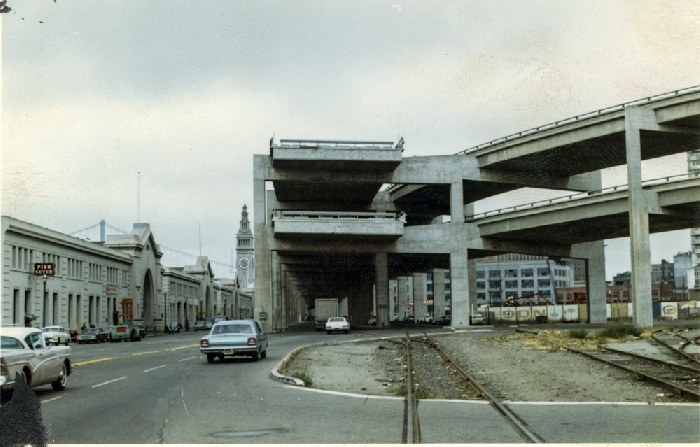 Embarcadero Freeway end with ramp curving to Broadway, circa 1965. (wnp27.6035; Courtesy of a Private Collector)

As part of his 1963 campaign for mayor, Congressman John Shelley proposed that the Embarcadero Freeway–what he called the “Harold Dobbs monstrosity”–be torn down and replaced with a parkway.17 Shelley won the race, but was not able to get rid of the freeway. The following year, 200,000 people turned out in Golden Gate Park for a protest against the so-called Panhandle Freeway.18 Speakers at the rally noted that they missed their chance to stop the Embarcadero Freeway, so they needed to be vigilant to prevent the Panhandle Freeway. 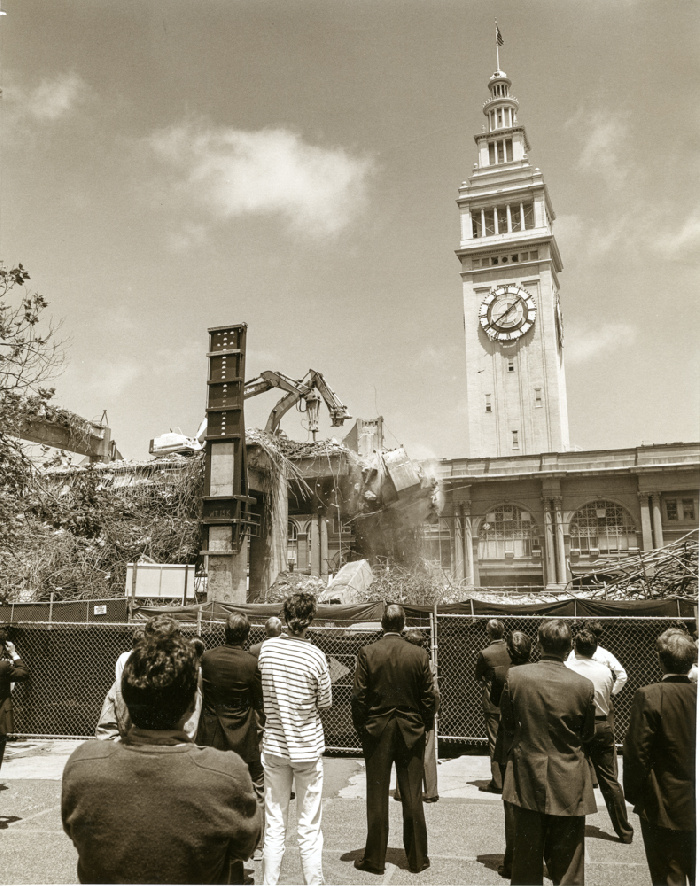 Demolition of Embarcadero Freeway in front of Ferry Building, 1991. (wnp4.1340; Courtesy of a Private Collector)

Ultimately, Mother Nature accomplished what political and civic will could not. The Loma Prieta earthquake on October 17, 1989 caused significant damage to the Embarcadero Freeway. It was closed in the wake of the quake and engineering reports stated that it was in imminent danger of collapse if there were major aftershocks.19 After months of studying whether to retrofit or tear down the Embarcadero Freeway, the Board of Supervisors on September 24, 1990 narrowly voted 6-5 in favor of Mayor Art Agnos’s plan to demolish it.20 That demolition began on February 27, 1991 with Mayor Agnos personally operating a hydraulic battering ram to start the process.21 The freeway that seemingly no one liked was finally gone.