Back at the beginning of the year, we told you about the makeover of Point Lobos Avenue that occurred in the early 1920s. This was neither the first nor the last road and construction work to go on in this area though. The oceanfront area to the south of the Cliff House was undergoing its own makeover before, during, and after the Point Lobos Avenue work. 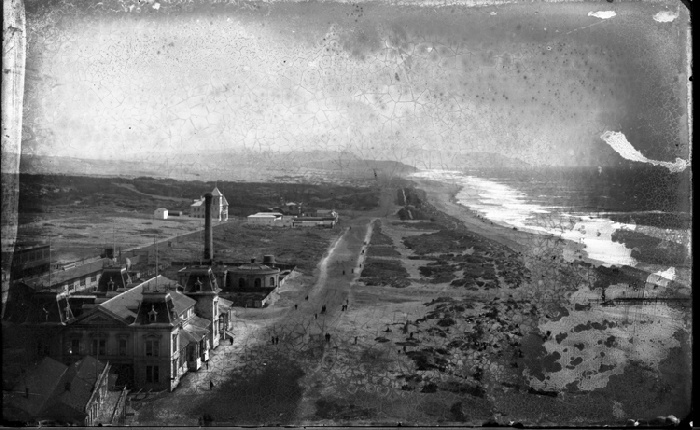 View from Sutro Heights south at Great Highway, circa 1895. (wnp4/wnpglass01.010; Courtesy of a Private Collector)

There had long been a horse road extending from the Cliff House end of Ocean Beach down to Sloat that was known as Ocean Boulevard. This was largely a sandy road, but by the mid-1890s, they were improving it with a foundation of rough stone all the way from the Cliff House to Lake Merced.1 By this time, the road was generally being referred to as the Great Highway, though we are not sure when the name may have been officially changed. 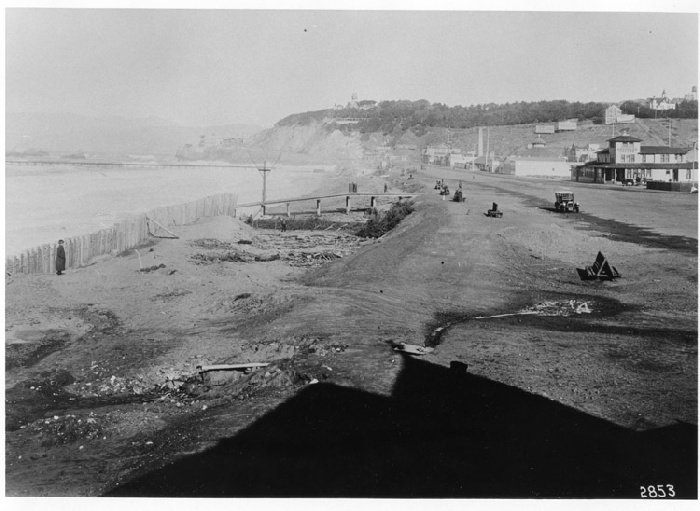 With the increasing popularity of automobiles after the turn of the 20th century though, San Francisco was keen to create both a better road and an attractive destination along the beach. What the City wanted was a beautiful esplanade that ran the full length of Ocean Beach. Recognizing that this would be expensive and not wanting to issue bonds for the work, the Board of Supervisors unanimously approved a resolution on February 15, 1915 to do the work “one section at a time.2” 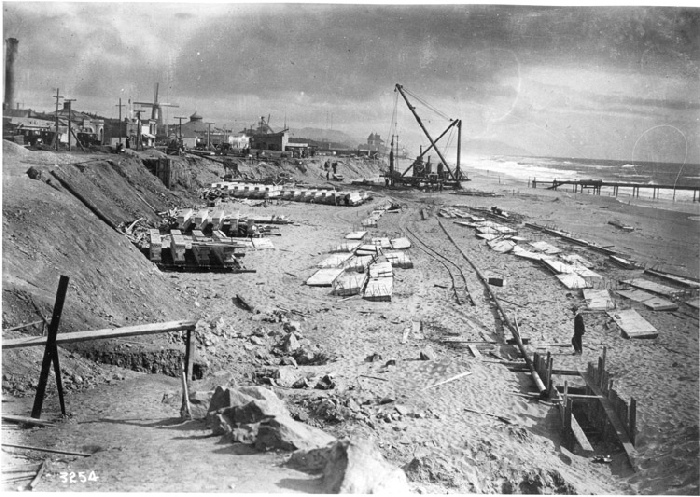 On May 3, 1915, the Board of Supervisors appropriated $50,000 to begin the work on the first section.3 Soon City Engineer Michael O’Shaughnessy was preparing plans for a seawall beginning at the bottom of the Sutro Heights hill with the area behind the wall to be filled in and beautified.4 After a hiccup with the original winning bidder for the work withdrawing, the contract for the initial work was awarded to J.D. Hannah on November 19, 1915.5 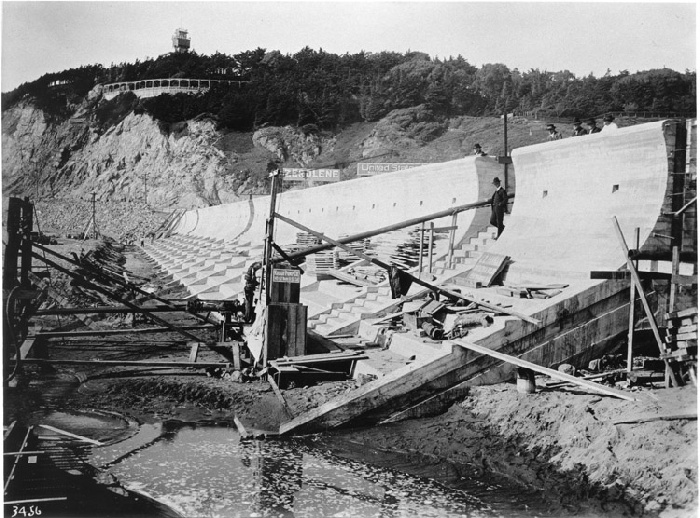 There was some early controversy regarding the placement of the seawall. An engineer hired by the Park-Richmond Improvement Club filed a report that the seawall was too close, 150 feet, from the high tide water mark and that it should be 300 feet.6 The City replied that if the beach was 300 feet wide, there would be insufficient room for the road next to it and they would have to buy beachfront properties to account for it. The work commenced per the City’s plans and progressed through much of 1916. The large seawall included bleacher seats at the bottom that are largely covered by sand today. 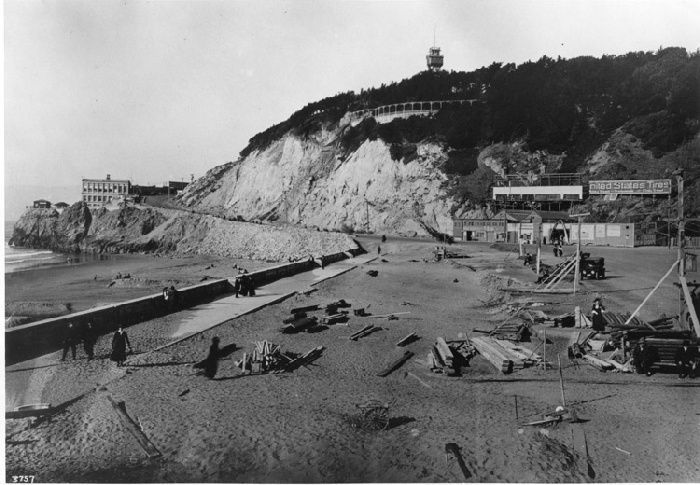 Soon after this work began, San Franciscans began petitioning for the City to extend the esplanade even further south. On March 18, 1916, the Recreation League asked Supervisors to extend it to at least where the Beach Chalet was located.7 The Golden Gate Park Federation of Improvement Clubs took this one step further and asked Supervisors to appropriate $100,000 for extension of the esplanade.8 The Civic League seconded this request.9 Supervisors, however, only appropriated an additional $25,000.10 The contract for that work was again awarded to J.D. Hannah, though he was not the lowest bidder, because his company had proved to be a responsible contractor during the first part of the construction.11 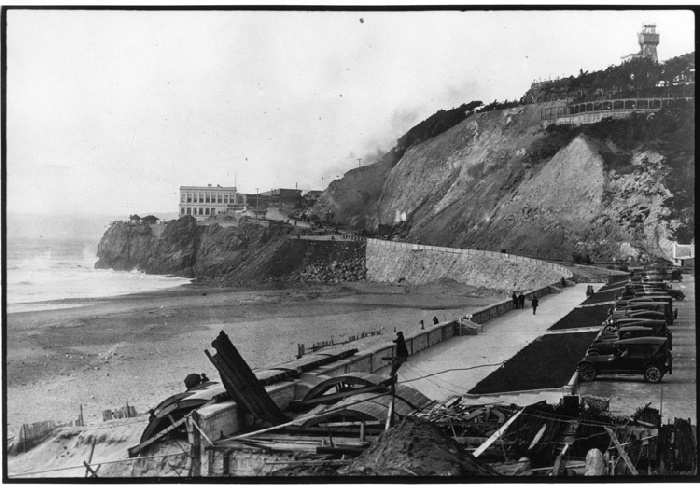 O’Shaughnessy announced the completion of the first part of the esplanade work on November 10, 1916.12 He turned over this section to Park Superintendent John McLaren for landscaping work. After McLaren finished his work, a large dedication was held on April 29, 1917.13 With World War I raging half a world away, the speeches of Mayor James “Sunny Jim” Rolph and others at the ceremony tended toward the patriotic, with Rolph urging everyone to “do our bit.” 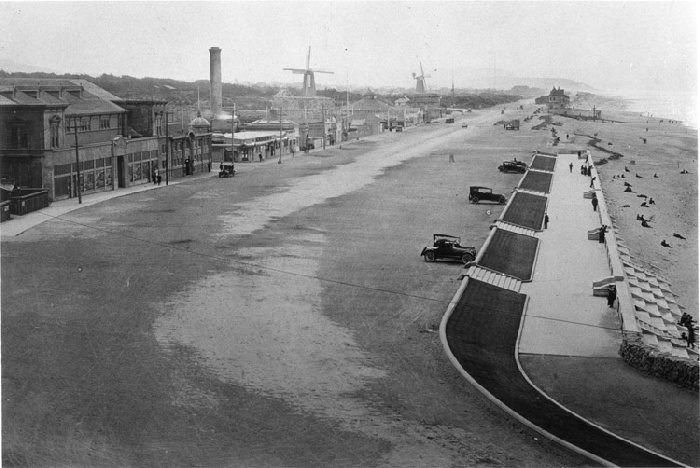 Mere weeks after the dedication, however, the Board’s Finance Committee eliminated further appropriations for the esplanade construction as they reduced the City budget.14 Despite calls from improvement clubs and newspapers for the esplanade work to continue, the City would not budge even when it received $392,000 from Southern Pacific as part of a land exchange.15 As we know today, the work would eventually be restarted. We will have that story soon.