As local activities begin to resume a post-pandemic sense of normalcy, some people may have forgotten what it is like to see large crowds gathered together. Here are some examples from the OpenSFHistory files that are guaranteed to jog memories back to the days before social distancing.

NOTE: With so many images from large San Francisco gatherings to be found on OpenSFHistory.org, it was not possible to include them all, but you will find some representative samples below. 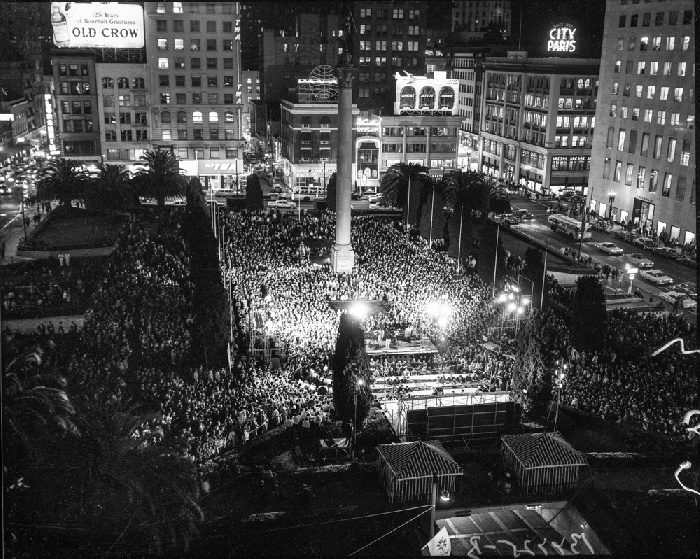 Up until the 1960s, San Francisco had been a Republican stronghold for about 50 years. It was also the center of power on the West Coast, so candidates of all political persuasions always found time to stump in San Francisco, seeking votes and cash. Although it had been eclipsed by Los Angeles as the most populous city on the West Coast by the time of the 1960 election, San Francisco still retained a lot of political power and candidates made their obligatory treks to the City that year. Republican Richard M. Nixon drew a large crowd to an outdoor rally in Union Square in September 1960. 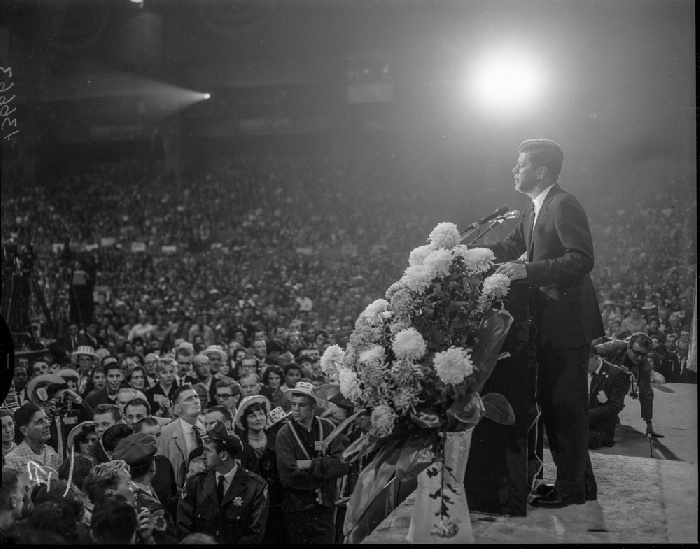 However, Democrat candidate John F. Kennedy also drew a huge crowd to an early November rally at the Cow Palace shortly before the election. In a sign of the changing times in San Francisco, Kennedy trounced Nixon by over 50,000 votes in the City. Nixon won the state though by a narrow 35,000 vote margin that year. San Francisco has remained a liberal stronghold ever since, but candidates of both parties continue to seek favor in the City and region in every national election and still draw big crowds when they campaign here. 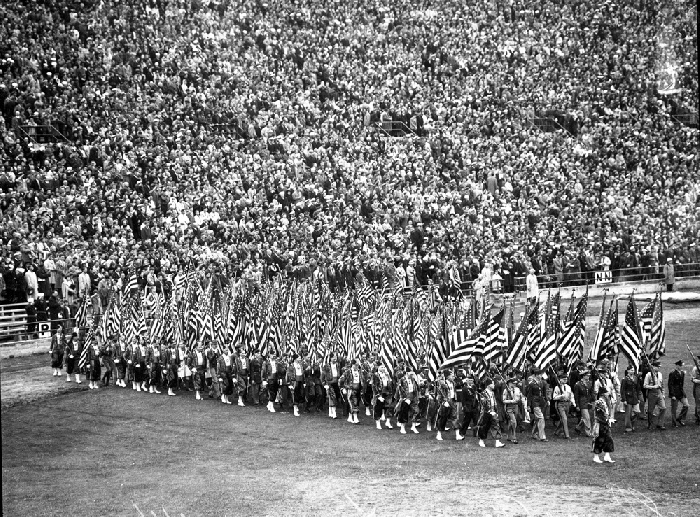 For the first half of the 20th century, major sports leagues were pretty much confined to the Eastern half of the country. Nonetheless, sports thrived here, drawing the masses to college and minor league games. Kezar Stadium hosted the East-West Shrine Game featuring college football all-stars for many years, while Cal and Stanford played their Big Game in the City several times as well. These football games drew huge crowds. Meanwhile, baseball aficionados saw future superstars like Joe DiMaggio play for the minor league San Francisco Seals before they reached the majors. 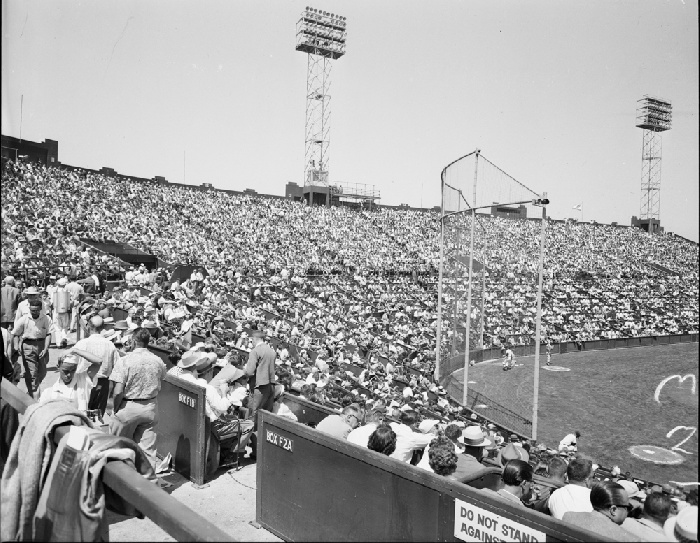 Eventually, the major leagues found their way to San Francisco and fans were delighted. First the San Francisco 49ers was founded in 1946 as part of the All-American Football Conference before being absorbed into the NFL in 1950. Next, the Giants arrived from New York in 1958 to continue their baseball rivalry with the Dodgers on the West Coast. They initially played their games in the old Seals Stadium, which had its capacity increased to 22,900 people for the Giants’ games and frequently drew a full compliment. 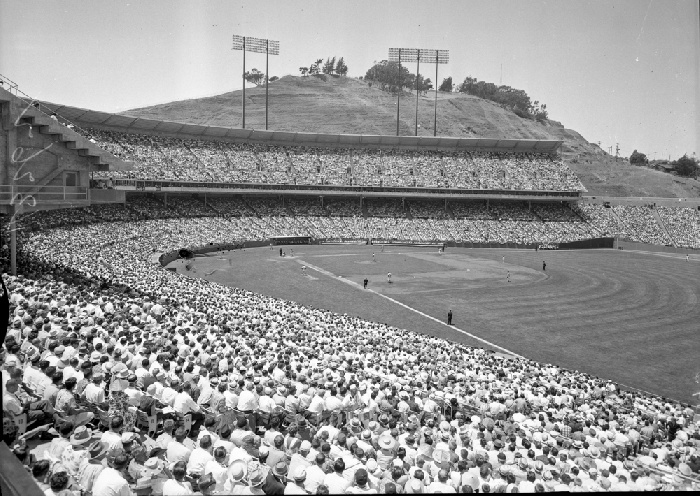 Two years later, the Giants opened up a new stadium at Candlestick Point, appropriately called Candlestick Park, with an initial baseball capacity of over 43,000. 40 years after that, they moved downtown to a new ballpark in China Basin called Pacific Bell Park (later SBC Park, AT&T Park, and now Oracle Park). The new stadium had a capacity of nearly 41,000 before later being increased to 42,000. It has also enjoyed regular sell-out crowds. Finally, the Warriors brought NBA basketball to San Francisco in 1962, playing initially at the Cow Palace and San Francisco Civic Auditorium. They would then move to Oakland (and change their name to the Golden State Warriors), before returning for the 2019-2020 season in the new Chase Arena not far from the Giants ballpark. 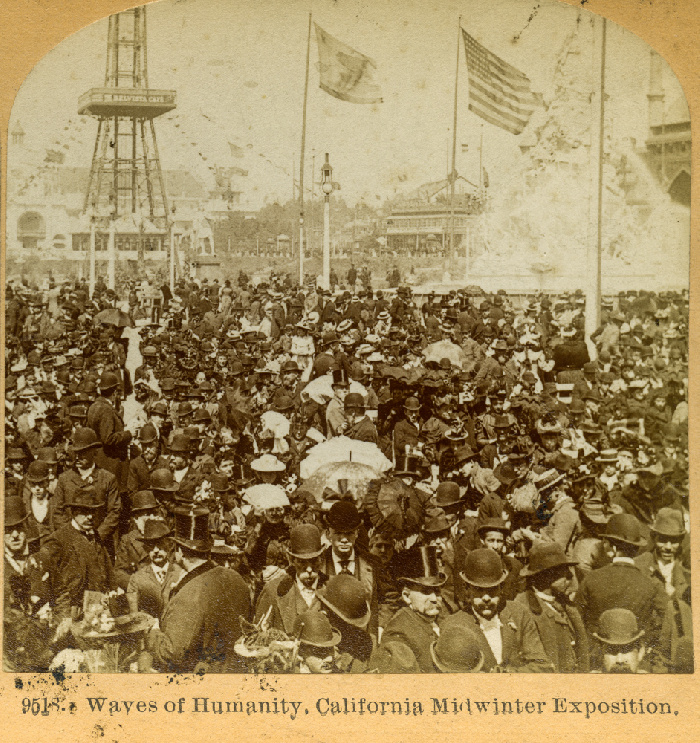 In the space of less than 50 years, San Francisco was home to three world fairs, though none were actually called that. The first was the 1894 Midwinter Fair. San Francisco had begun planting and building Golden Gate Park in 1870. After a little more than 20 years, the Park was really taking shape and San Francisco decided to invite the world to see it with the six-month long Midwinter Fair. Approximately two and a half million people visited in that time. 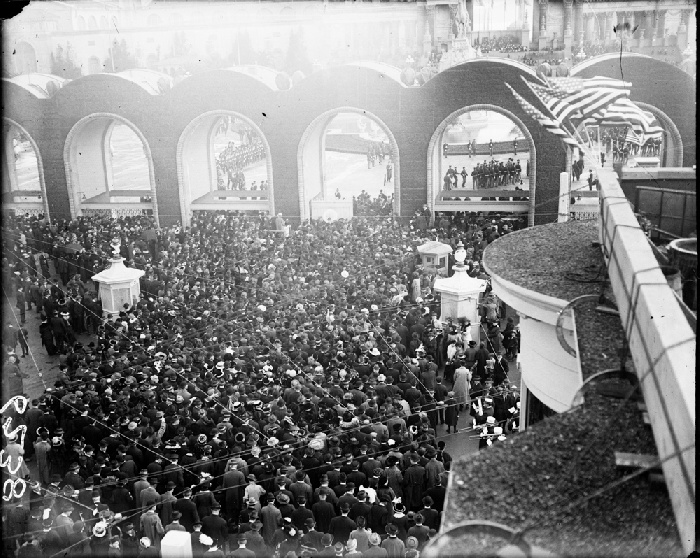 Following the 1906 earthquake, San Francisco was forced to rebuild. In the early 1910s, the City began looking for a way to show the world it was ready for tourism to return. Another world’s fair was their answer. The stated reason for the 1915 Panama-Pacific International Exposition was to celebrate the opening of the Panama Canal, but really San Francisco just wanted people to come visit again. The festival lasted more than ten months and attracted nearly 19 million visitors. 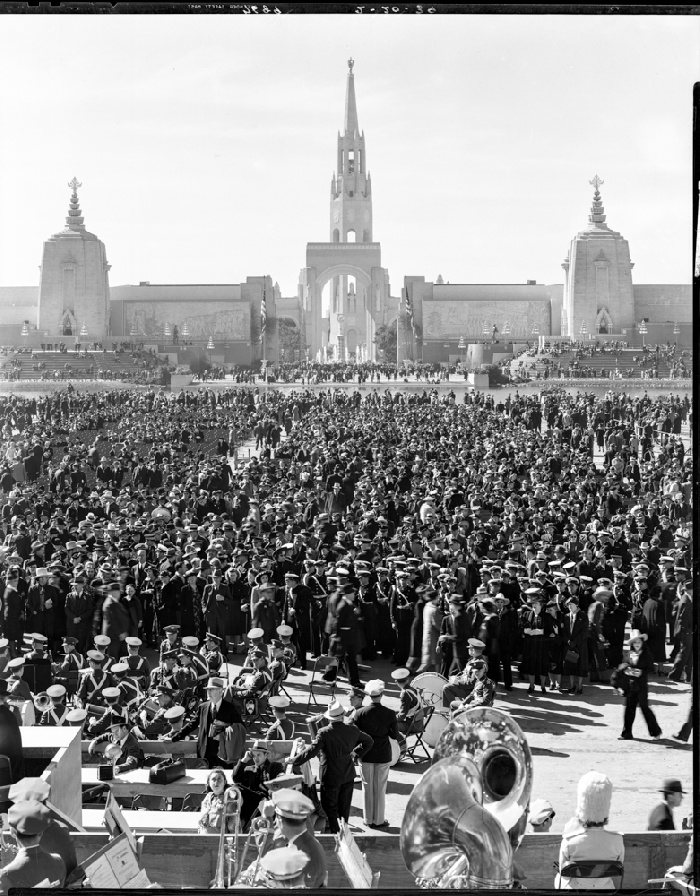 In the 1930s, transportation into San Francisco took a great leap forward with the construction of the two great spans, the Golden Gate Bridge and the Bay Bridge. Construction of the latter included the creation of an artificial island to the north of Yerba Buena Island. Eager to show off the bridges, San Francisco celebrated by putting on the Golden Gate International Exposition on the newly created Treasure Island. It was open for seven months in 1939 and another four months in 1940, drawing over 15 million visitors. 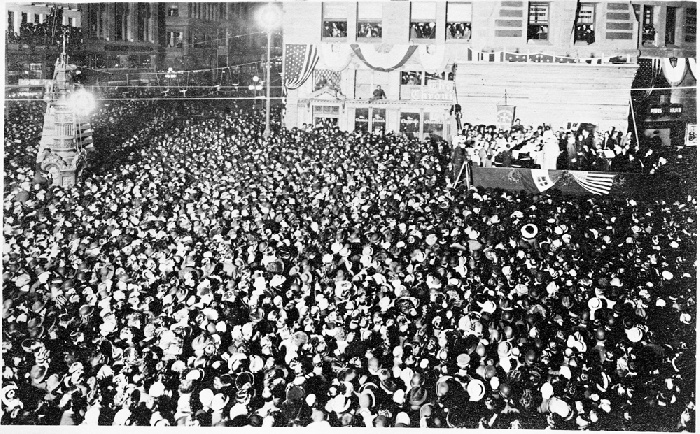 San Francisco has long been the cultural center of the West Coast, despite what Los Angeles may believe now. Musicians, artists, and actors have long made the trek to the City to entertain. Enrico Caruso famously was here performing in a production of Carmen at the time of the 1906 earthquake. Another Italian opera star, Luisa Tetrazzini once announced she would perform on the streets of San Francisco if she had to while experiencing legal issues that prevented her from performing in New York. After winning that case, she did come to San Francisco to sing in front of hundreds of thousands of people clogging the streets around Lotta’s Fountain. 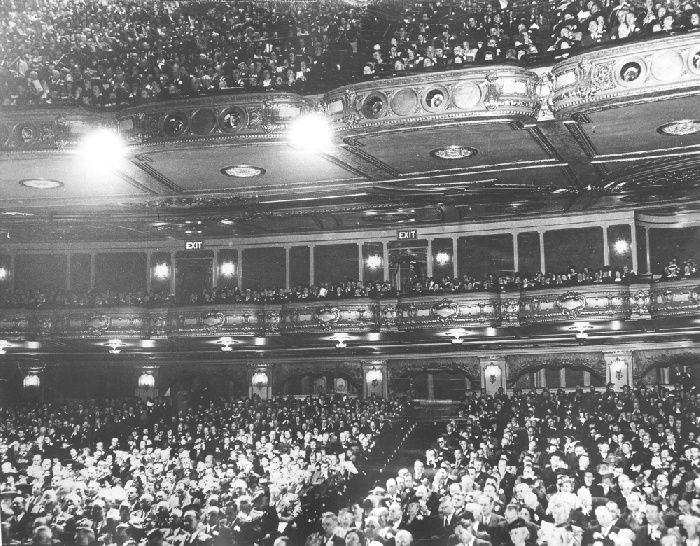 With the advent of motion pictures, theaters sprung up all over town. Unlike today’s cineplexes, the City was once dotted with grand movie palaces, such as the Alexandria, the Alhambra, the Castro, the Coliseum, the Coronet, and the Fox (see above) to name a small few. These theaters often seated thousands of people. Large venues for music and plays also opened to bring all of the best entertainment to the City. 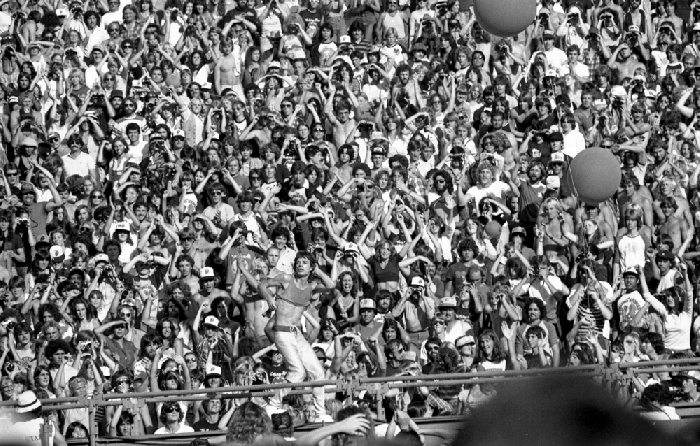 With large stadiums for the local sports teams, even bigger crowds gathered for music events, like the Rolling Stones at Candlestick Park seen above. These big festivals routinely draw many thousands of fans. 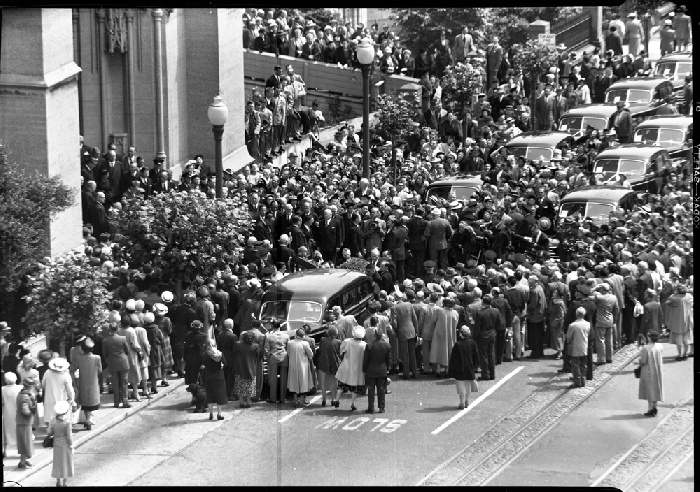 Crowd outside of Grace Cathedral for funeral of William Randolph Hearst, August 17, 1951. (wnp14.13471; Courtesy of a Private Collector)

San Francisco has many large churches that can seat a lot of people, but on occasion, there are religious events that draw huge crowds. In 1987, for example, Pope John Paul II came to San Francisco. The Pope held a mass at Candlestick Park that 70,000 worshippers attended. As seen above, William Randolph Hearst’s funeral in 1951 saw an overflow crowd at Grace Cathedral. 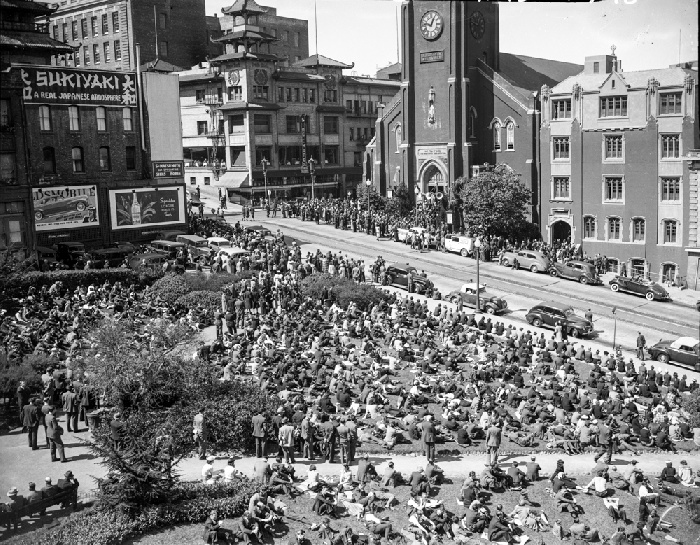 Sometimes, important religious services drew crowds so big, the overflow spilled out into surrounding streets and parks. As seen here, some attendees at the Good Friday services at Old St. Mary’s Church in 1940 had to stand outside on the sidewalk or across the street in St. Mary’s Square (before there was a parking garage there). In 1961, Father Patrick Peyton brought his Family Rosary Crusade, long a radio and television staple, to the Polo Fields where an estimated 500,000 people celebrated the rosary with him. 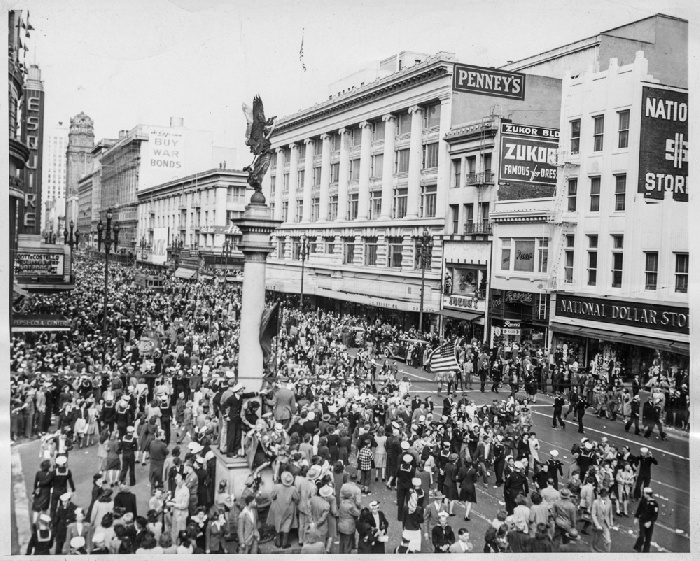 In the course of human events, crowds often come together in protest or celebration, sometimes planned and other times organically. Typically, but not always, it is the celebrations that are organic, such as the Victory in Japan throngs that celebrated on Market Street to mark the end of World War II. 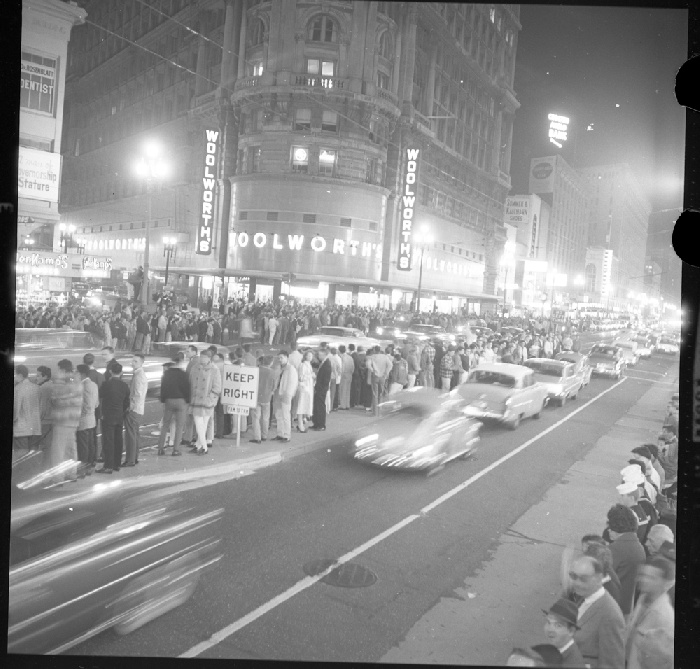 Sports often provide incentive for organic celebrations, like when the Giants beat the Dodgers to win the 1962 National League pennant. Similar crowded festivities occurred after Giants’ World Series wins in the last decade, 49ers’ Super Bowl wins in the 1980s and 90s, and Warriors’ NBA titles in 1975 and 2010s. These wins also featured planned parades on Market Street to celebrate the championships. Market Street has often been the site of planned parades for everything from welcoming world leaders to San Francisco to 50 years of Pride parades. 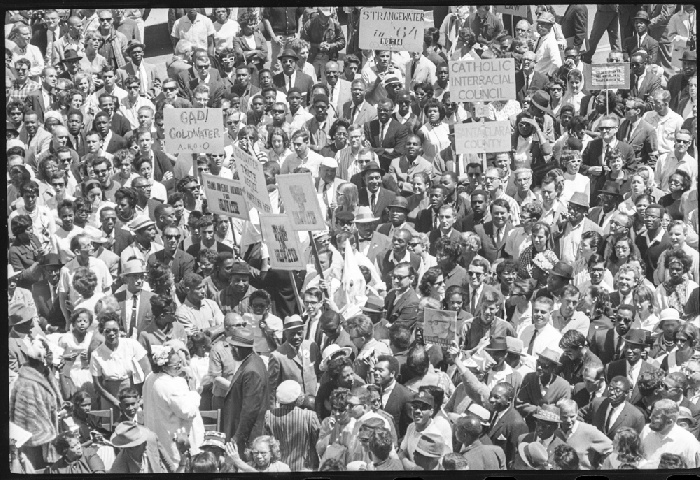 Protests also have brought thousands of people together over the years. The 1960s in particular featured a number of large civil rights marches where people filled the Civic Center or Kezar Stadium or Golden Gate Park. Protests against the Vietnam war continued to bring thousands together into the early 1970s. Just in the past year, many thousands came together as part of the Black Lives Matter protest movement at Dolores Park, downtown streets, and the Golden Gate Bridge. 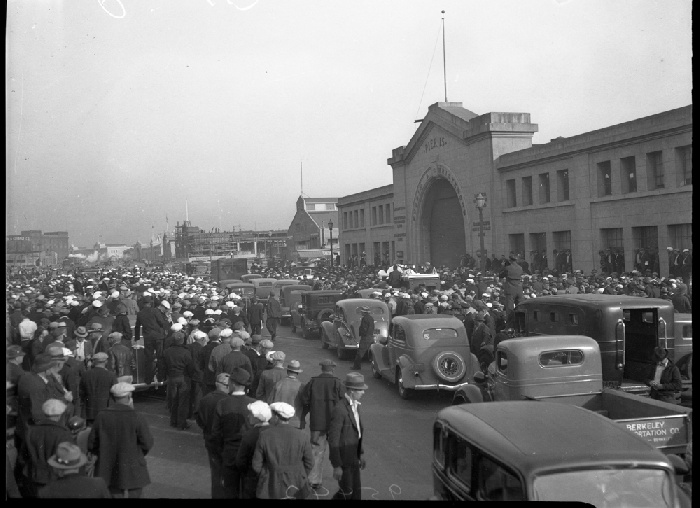 Even before the 1960s protest marches, there were a number of labor strife rallies where large groups of union workers came together to strike or fight for greater rights and working conditions. Some 3000 Longshoremen and Teamsters came together in 1937 in a dock dispute between the unions. Their respective leaders debated the issues over loudspeakers to the assembly. A general strike in 1934 lasted over two months and completely shut down the City’s docks for four days.

Hardly a year has gone by in San Francisco’s history without crowded gatherings for one reason or another. Even during this past pandemic year, they did not completely disappear, but will likely again happen more often now as the world opens up again.