We previously told you about the the first phase of the Esplanade project at Ocean Beach that began in 1915 and was completed in 1917. Despite plans to extend the Esplanade further down the beach though, San Francisco eliminated further funding in May 1917. This and other cuts allowed the City to avoid cutting what some called a bloated payroll.1 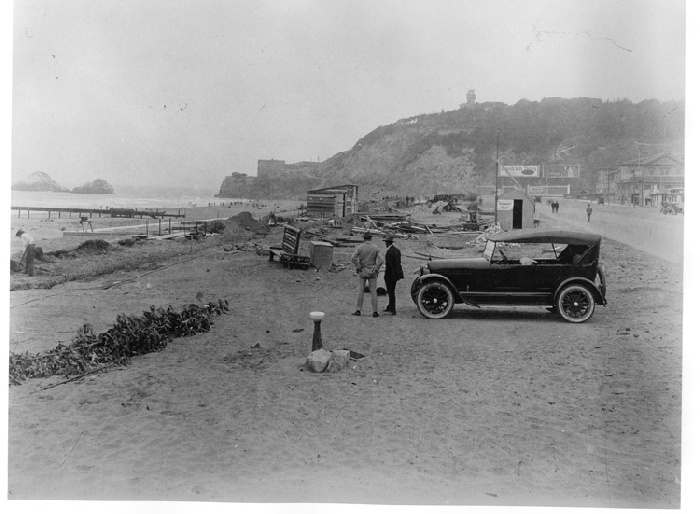 After nearly two years of newspaper editorials and public calls for monies to extend the Esplanade, the Board of Public Works finally appropriated $85,000 on March 19, 1919, but not for extension of the Esplanade.2 Instead the funds were to be used for the paving of the Great Highway from the north end of the Esplanade to Sloat Avenue. A contract for the paving work was awarded by the end of April 19193 and work started soon thereafter. The work caused the shutdown of the Great Highway for two months.4 The initial work was criticized however for being insufficient to bear heavy traffic. 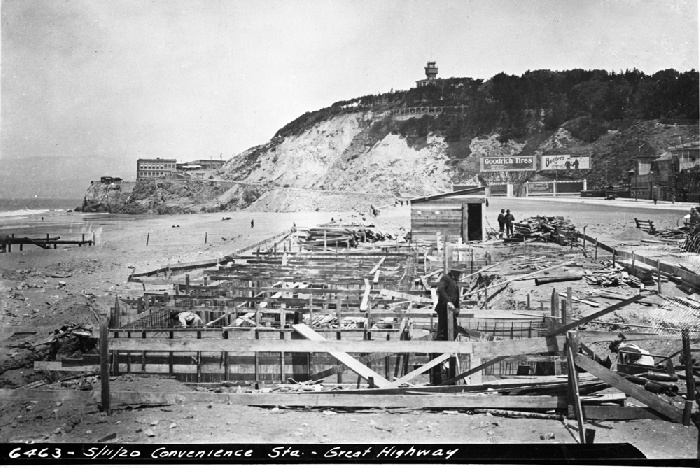 On March 20, 1920, the City signed a deal with contractor John Spargo to build a “public comfort station,” aka, a restroom, by the Esplanade.5 Although money for the Esplanade extension and Point Lobos Road had also been earmarked, City supervisors voted in November 1920 to instead use that money to improve Laguna Honda Boulevard.6 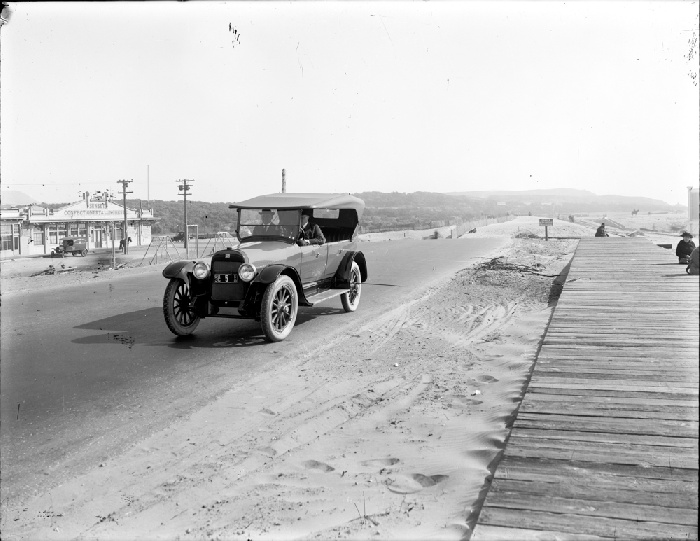 Meanwhile, at the south end of the Great Highway at Sloat Boulevard, the City had approved the construction of a wooden boardwalk that would extend from Sloat to Lincoln Way on the beach side of the Great Highway.7 The contract was awarded to the Hanna Brothers, but with one caveat. Only $15,000 was appropriated for the work, so the boardwalk would only extend as far north as the money lasted. City Supervisors were planning on including more money for the Esplanade in the following fiscal year’s budget. 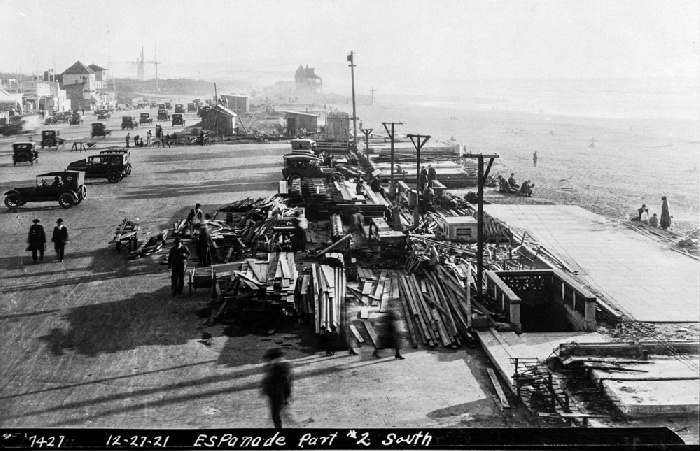 Finally, after continued cries for the Esplanade to be extended from the public, improvement clubs, and the press, the City set aside $150,000 for extension of the Esplanade in its 1921-22 budget.8 City Supervisor Ralph McLeran stated that the Esplanade could be completed in short order if annual appropriations were made. Mayor James “Sunny Jim” Rolph signed off on this budget on June 7, 1921.9 The Clinton Construction Company was the lowest bidder for the work and was awarded the contract at a Board of Public Works meeting on August 19, 1921.10 Work on the Esplanade extension began before the end of the year. 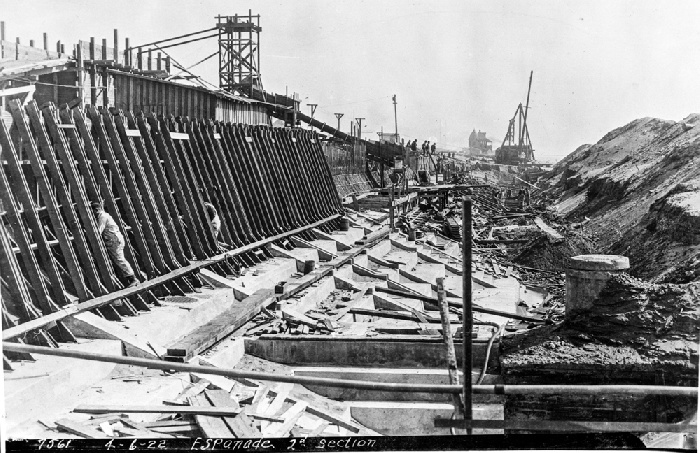 Concurrent with this work extending the Esplanade, the City was also widening and paving Point Lobos Avenue That work was finished by June 1922 and a dedication ceremony for its opening and the further portion of the Esplanade to Cabrillo Street was held on June 11, 1922.11 The day before, Mayor Rolph signed the budget for the 1922-23 fiscal year, which included another $150,000 for the Esplanade work.12 The contract for the next section of the Esplanade, taking it to Fulton Street, went to the Healy-Tibbitts Company on August 23, 1922.13 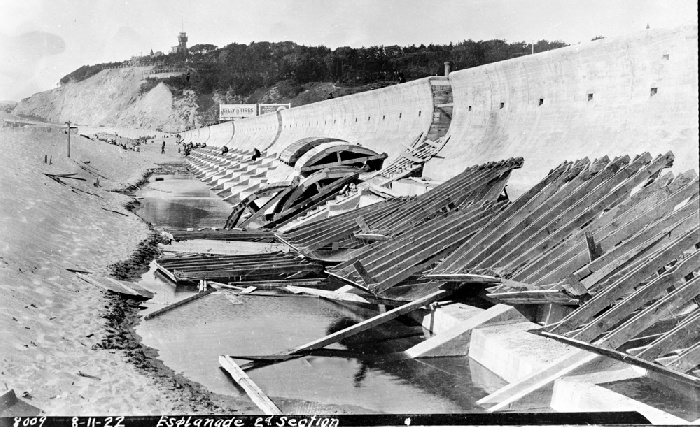 As the Esplanade construction made its way to Fulton Street, City Engineer Michael O’Shaughnessy declared he would not seek funds for further extension in the 1923-24 budget because the City could not afford a big expenditure and constructing the Esplanade in the piecemeal way they had been doing was making it more expensive than it should be.14 He stated that he preferred to wait until the City could afford to make a large appropriation. The following year, O’Shaughnessy’s recommendation remained the same.15 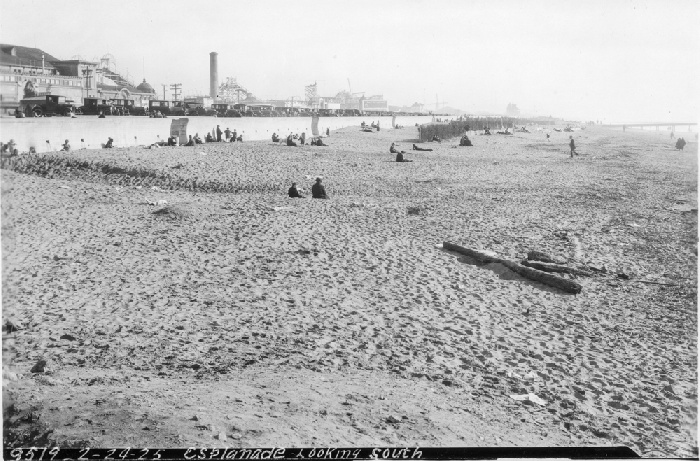 So, like seven years before, work on the Ocean Beach Esplanade had come to a halt with O’Shaughnessy refusing to seek funds for a further extension until bigger amounts could be appropriated. For now, the Esplanade stretched from Point Lobos Avenue to Fulton Street near the Old Beach Chalet that was on the west side of the Great Highway. It was an attractive addition to the oceanfront, but there was more to come. We will get to that story.