At the dawn of the 20th century, golf was an emerging sport on the West Coast. The Presidio Golf Club was one of the first courses built in California in 1895 when the Presidio commander allowed the San Francisco Golf and Country Club to build a nine-hole course. It was followed in 1902 by a 3-hole course in Lincoln Park. Later, five courses would spring up in the Lake Merced area–the Ingleside Course, Harding Park, the Olympic Club, the San Francisco Golf Club, and, just across the border in Daly City, the Lake Merced Golf Club. The latter four still exist. In 1951, Golden Gate Park would add a 9-hole, par 3 course in the western end of the Park.

With the growing popularity of golf came an increasing number of golf tournaments. While primarily contested initially in Eastern and Midwestern states, California clubs began hosting tournaments in the early months of the year because weather permitted play during those months. In 1930, San Francisco decided to get in on the action. 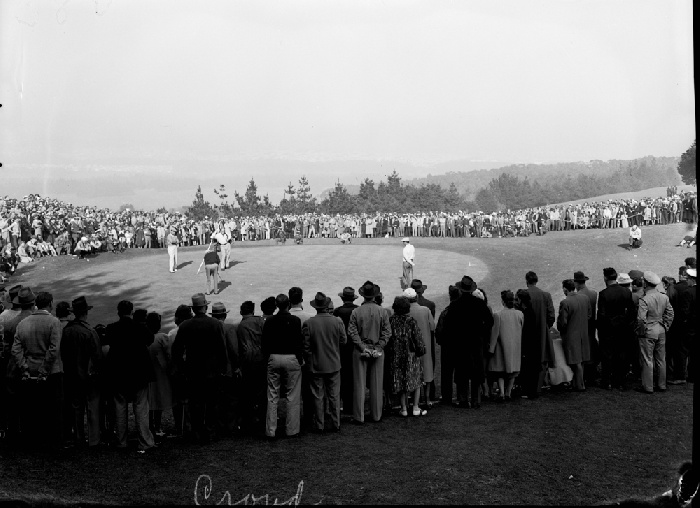 It started with the grand sounding name of the San Francisco National Match Play Open. Match play is a style of golf competition where two golfers face off against each other to see who can win the most holes. The Junior Chamber of Commerce initiated the event as way to show off the City as a winter golf destination.1 The new San Francisco tournament began play on December 4, 1930 at the Olympic Club’s Lakeside course. In the final, Leo Diegel, one of the top golfers of the day, crushed Al Espinosa 6-and-4 (meaning Diegel had won 6 more holes than Espinosa with 4 holes to play, ending the match) for the inaugural victory. 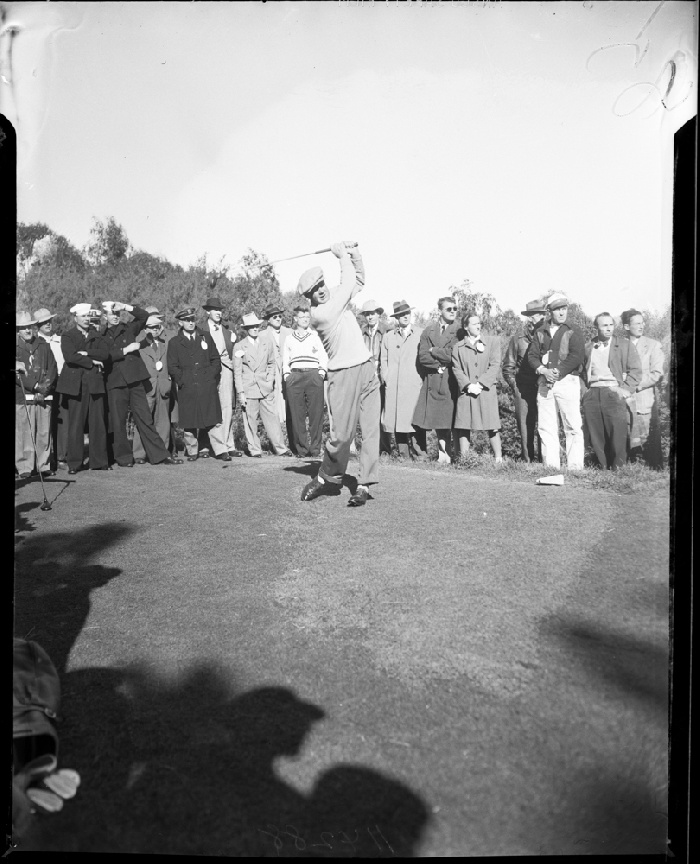 Byron Nelson teeing off during first round of San Francisco Open, January 11, 1946. (wnp14.10991; Courtesy of a Private Collector)

For the next eleven years, the tournament continued as the San Francisco National Match Play Open. It was rotated among San Francisco’s major golf courses. Besides the Olympic Club, this included the Presidio course, the Ingleside links, the Lake Merced Golf Club, and the San Francisco Golf Club. It attracted many of the best golfers of the day, such as George Van Elm, Craig Wood, Harry Cooper, and, most notably, Jimmy Demaret and Sam Snead. Demaret won the title in both 1938 and 1940, the first golfer to win the tournament twice. 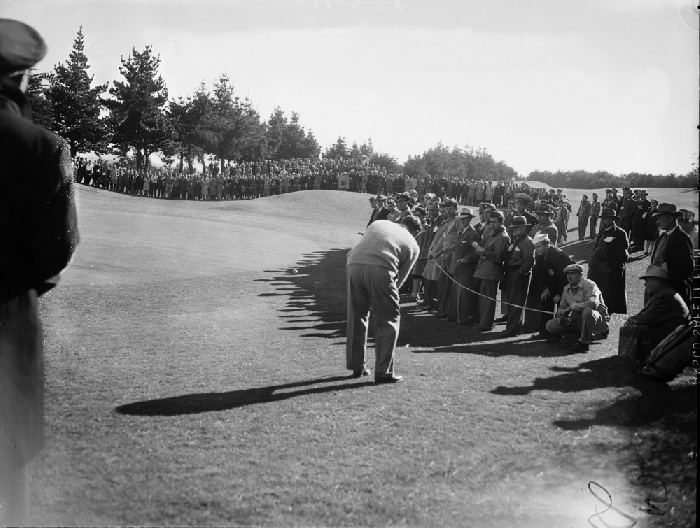 Lawson Little chipping from the fringe during first round of San Francisco Open, January 11, 1946. (wnp14.10986; Courtesy of a Private Collector)

Despite San Francisco’s wish to become an attractive winter golf destination, the weather gods did not always cooperate. The San Francisco National Match Play Open was plagued over the years with rain, wind, cold temperatures, and even snow.2 The 1942 event scheduled for January was initially canceled days after the Pearl Harbor attack on December 7, 1941. However, a public outcry to retain the tourney led to it being held as scheduled. 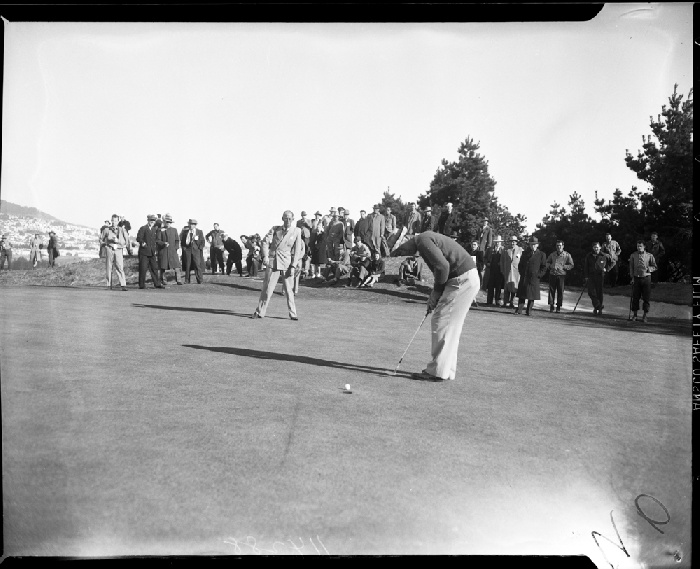 The 1942 edition featured two changes. The tournament was renamed the San Francisco Open and the competition was switched from match play to stroke play. Under that format, players competed to see who would have the least amount of strokes over the course of the tournament. As with prior years, the tourney was twice postponed because of bad weather. In the end, two of the biggest names of the day, Ben Hogan and Sam Snead fought a duel in the fading light, with Hogan taking victory by three strokes.3 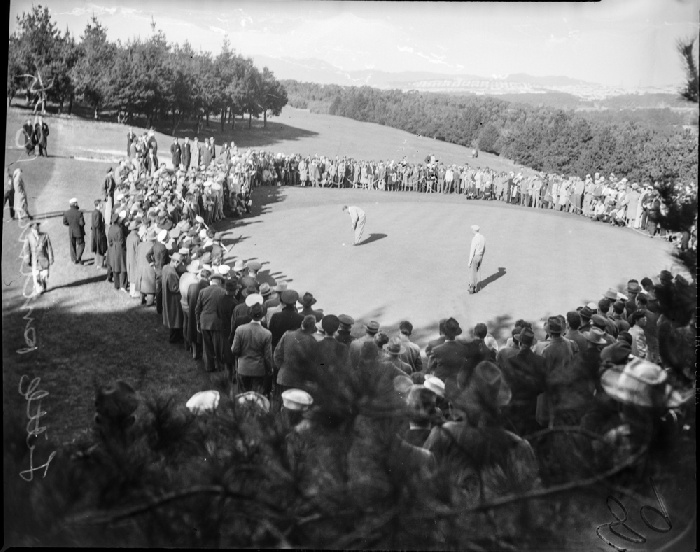 With World War II raging, the decision was made to cancel the 1943 San Francisco Open. However, before the year was out, the decision was made to revive the tournament in December 1943, only to find that the planned dates conflicted with the Miami Open.4 So new dates in mid-January 1944 were chosen in order to coincide with a war bond effort called the Victory Loan Drive. To make the association complete, the event was renamed as the San Francisco Victory Open. Another golf legend, Byron Nelson, proved victorious by six strokes at Harding Park.5 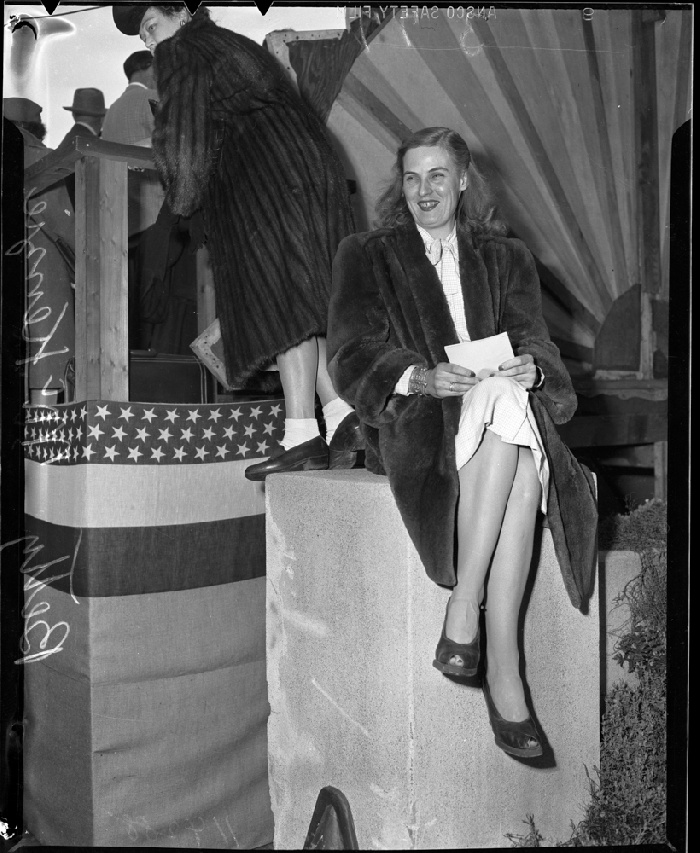 Betty McKenzie, one of five women selected as Golf Queens at the San Francisco Open, January 13, 1946. (wnp14.10993; Courtesy of a Private Collector)

11 months later, Nelson returned to Harding Park in December 1944 to repeat as champion, this time by just one stroke. The 15th and, as it turned out, last San Francisco Open was held in January 1946 back where it began, at the Olympic Club’s Lakeside course. With $25,000 in prize money, it was the richest tournament in the PGA Tour’s west coast swing that winter.6 Along with the tournament itself, the American Women’s Voluntary Services organization had a contest to select five “Golf Queens” that would be announced at the award ceremony for the event.7 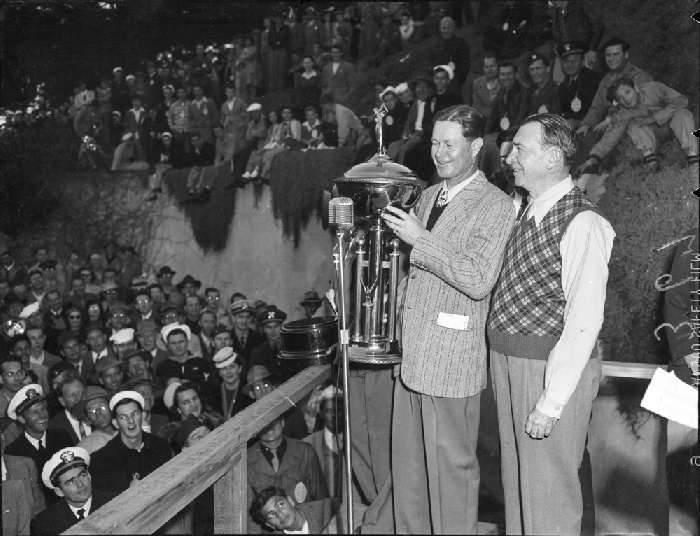 For the third consecutive time, Nelson took the prize, this time by a whopping nine strokes.8 20,000 people gathered to watch him do it, which set a record for the largest crowd at a winter tour event. Leading by six strokes going into the last day, Nelson carded a 68 in the final round, the lowest single day score in the tournament.

Despite the success and large crowds of the 1946 San Francisco Open, the Junior Chamber of Commerce announced soon thereafter that it was abandoning the event due to a “lack of public interest.9” Professional golf did not disappear from the City though. Numerous tournaments have been held here since the San Francisco Open’s demise, including majors like the 1958, 1981, and 2007 U.S. Amateurs at the Olympic Club, 1955, 1966, 1987, 1998, and 2012 U.S. Opens also at the Olympic Club, and the PGA Championship just last year at Harding Park. In addition, many other tournaments on the men’s, women’s, junior’s, and amateur tours have taken place on the City’s links and will continue to do so. In fact, the 2028 PGA Championship and 2033 Ryder Cup will be coming to the Olympic Club. Professional golf is here to stay.