On August 19, 1957, some San Francisco drivers beheld a strange sight. There on city streets was a train. Not a cable car, not a streetcar, but an actual Southern Pacific locomotive engine, albeit smaller than normal. What was it doing traveling off the tracks? It seems the little engine that could was on its way to becoming a beloved children’s attraction. 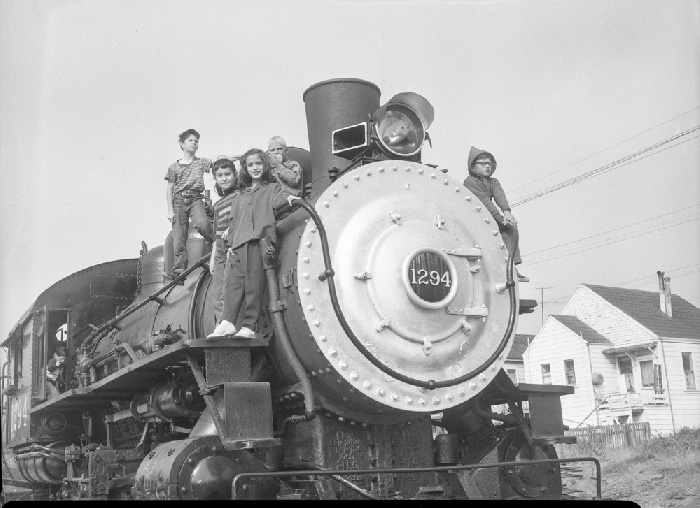 It all started 33 years prior when an S-14 class 0-6-0 switch engine was built at the Lima Locomotive Works of Ohio for the Southern Pacific Company.1 Switch engines did not travel the country, but instead lived in rail yards moving other railroad cars around. After a career in such service, Locomotive #1294 headed for retirement in the 1950s. 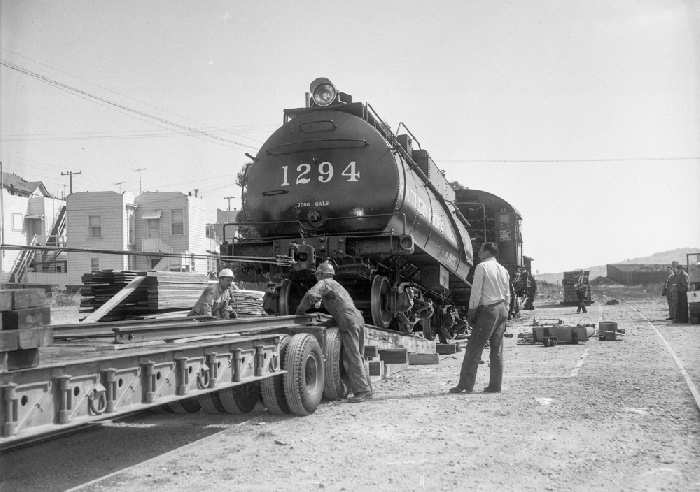 Instead of scrapping Locomotive #1294 however, Southern Pacific instead refurbished it and then presented it “To San Francisco Children of All Ages.” With the co-sponsorship of the San Francisco News, some Teamsters locals, and the Sheedy Drayage Company, Southern Pacific sent the little locomotive to…the zoo? Indeed, while the San Francisco Zoo was primarily an animal attraction, it included a children’s playground area. So like the jet in Larsen Park, it was decided to place Locomotive #1294 in the children’s playground area for kids to climb on. 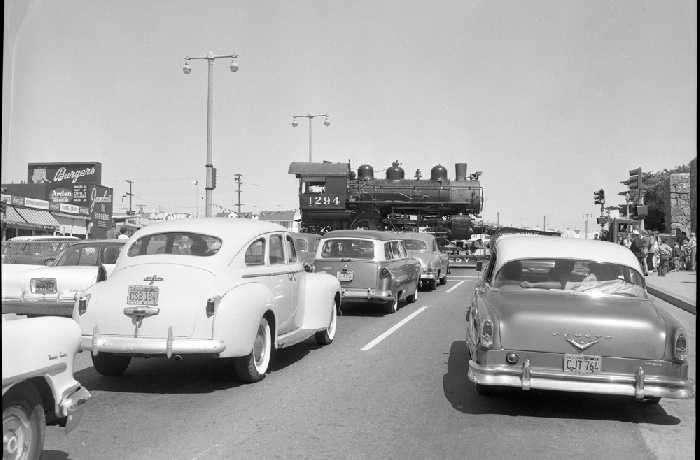 Of course, getting a locomotive engine to the zoo was not an easy task as no train tracks went there. So Locomotive #1294 was sent to the nearest Southern Pacific spur at San Jose Avenue and Sadowa Street near where Alemany Boulevard, San Jose Avenue, and Interstate 280 all meet today. There, a heavy-duty winch dragged it on to the back of a Sheedy Drayage flatbed trailer. From there, it was driven approximately three miles on city streets to the zoo’s entrance at Sloat and 45th Avenue. 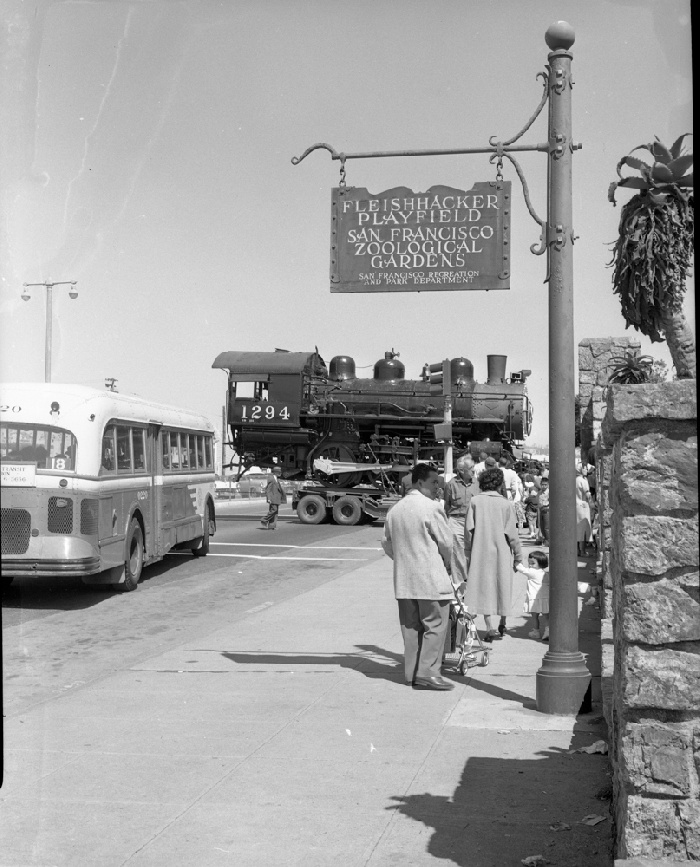 Driving a locomotive engine around on city streets was not an easy job, particularly navigating corners. Locomotive #1294 was literally overhanging the back of the flatbed trailer, so it had to be very securely fastened. After the loading and securing, the Sheedy Drayage truck and trailer left about noon and stopped traffic at a number of intersections as it slowly made its way.2 The job took about three hours. 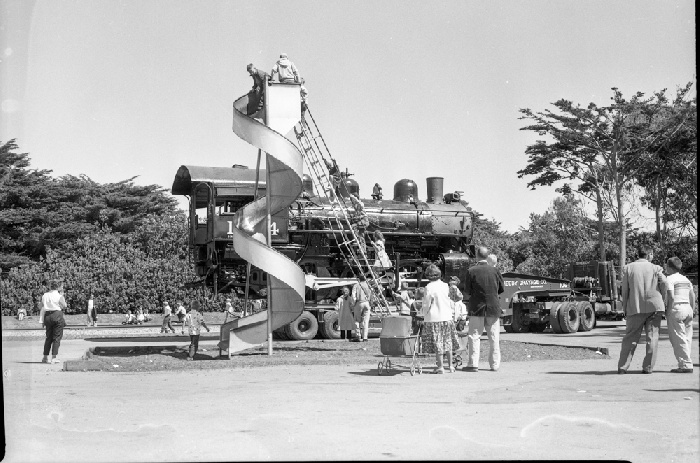 Perhaps the hardest part of getting Locomotive #1294 to the zoo was navigating down the switchback walkway from the zoo entrance at Sloat and 45th to the Children’s Playground. Once there, the flatbed trailer was parked and the engine was unloaded the following day. It was placed on a bit of railroad track that was set on the ground. Getting it there was only part of the job though. An oil tender car, which came on a second truck, was connected to it to form a complete switch engine.3 However, you could not simply park a locomotive engine in a playground. Some precautions had to be taken to make it somewhat safe for children. 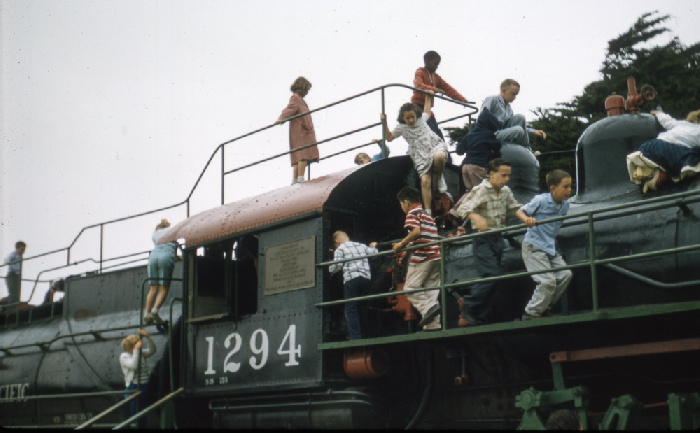 Over the next month, Rec and Park employees painted Locomotive #1294, installed guard rails and staircases, and a sand pit around it. Any movable parts in the engine were either removed or welded in place. They even welded the train wheels to the track it was sitting on. Local teamsters contributed $1,000 for this work. The new playground attraction area, which already included a cable car, was dedicated on November 29, 1957. 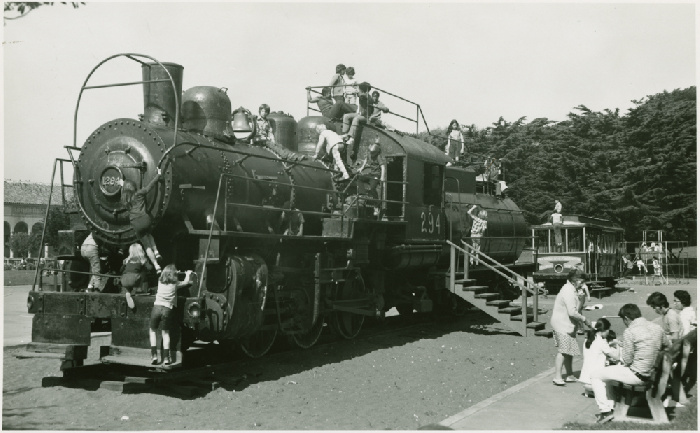 For the next nearly 24 years, Locomotive #1294 was an integral part of many a child’s trip to the zoo. The children climbed all over it and rang its bell. In 1966, the Grateful Dead posed for an iconic photo by famed rock photographer Herb Greene in front of the engine. However, parked as it was near the ocean, time and the sea air took its toll on Locomotive #1294. By June 1981, the zoo decided it was time to rid itself of the problems associated with it and the rusty switch engine was cut up into pieces by the Alco Iron & Metal Company of San Leandro and later sold for scrap.4 Another fixture of a San Francisco childhood had vanished.