It is perhaps the most iconic piece of architecture in San Francisco history, a town filled with iconic structures. After the first Cliff House burned down on Christmas Day 1894, Adolph Sutro, by then the owner of the oceanside restaurant, not only vowed to rebuild, he did so in a slightly more flamboyant manner. Arising from the ashes came a magnificent structure that has, ever since, carried the misnomer, the Victorian Cliff House. 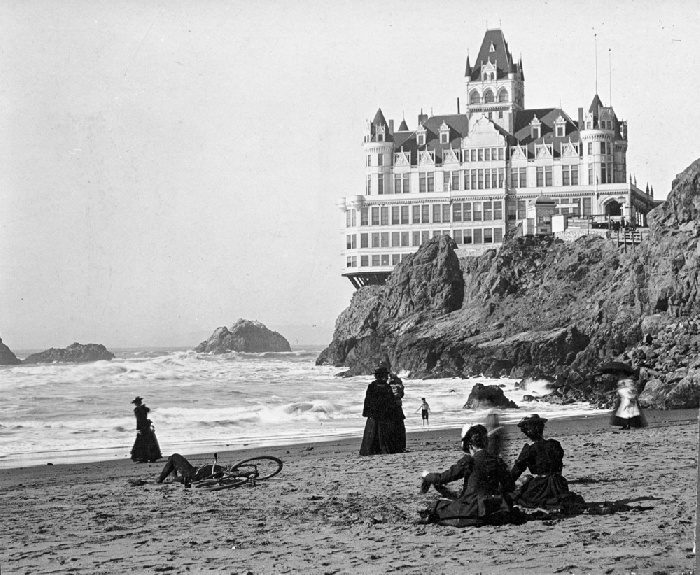 Opening on February 1, 1896, Sutro’s new Cliff House was designed to look like a French chateau1 with some inspiration from the Hotel del Coronado in San Diego. It was five stories tall with a central tower and four turrets. Sutro had commissioned his Sutro Baths architects, Emile Lemme and C.J. Colley, to design it. The new, grander Cliff House was a favorite of early photographers and the public. As a result, today we perhaps have a skewed view of how long it was around. With so many photographs, postcards, and even paintings and drawings of Sutro’s Cliff House, it seems like it must have been around for a long time. However, despite surviving the 1906 earthquake, the second Cliff House came to an end a mere eleven and a half years after it opened. 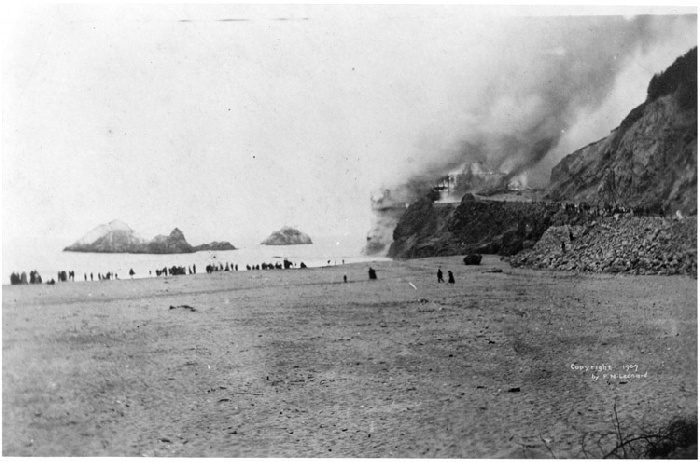 On September 7, 1907, the Cliff House was closed for some remodeling work. Because it was a Saturday, the workers left for the day early in the afternoon2. Around 4:30 p.m., John Wilkins, who previously had run the restaurant and still lived close by, noticed smoke coming out of the basement and brought it to the attention of the watchman Owen Mulvaney. Mulvaney immediately used the building’s auxillary service to call in an alarm3. Captain W.E. Kelly of the Fire Department’s chemical company no. 8 located close by was the first to respond with several firemen and a horse-drawn fire engine. They began running a chemical firehose into the Cliff House and ran into a visibly dazed Wilkins. Fireman Fred Klatzal tried to help him out, but both collapsed from the smoke. Nearby citizens rushing in to see if they could be of service helped the two out of the building. The fire engine was so close to the flames that the horse’s shoulder was singed and it soon used up its limited supply of chemicals. 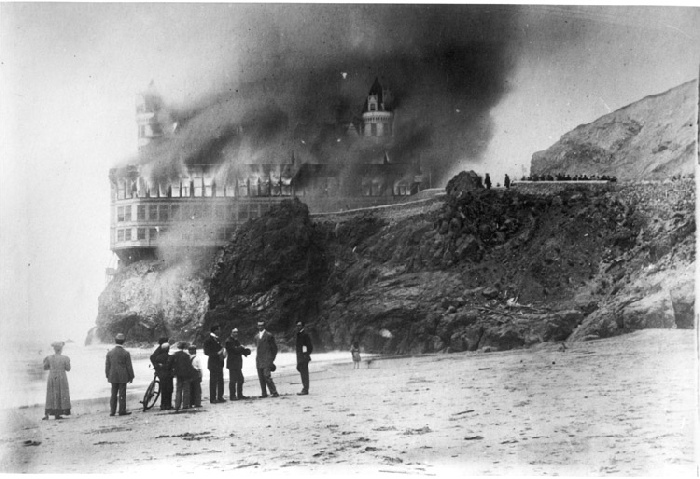 Captain Kelly then called Chief Wells, who ordered companies 30 and 36 to respond. Engine company 36 got there quickly with company 30 arriving shortly thereafter. At 5:25 p.m., soon after firemen had hooked up a firehose to a hydrant by the garage and began using it to douse flames, powder stored in the basement exploded and saving the Cliff House became a lost cause. The powder was being used by workers to widen the road down to the beach. More fire department companies–engine companies nos. 21, 22, 23, and 26, truck companies nos. 5 and 6, and chemical company no. 8–responded to the blaze, but heat forced fire personnel and equipment to move back. Even the sea lions on Seal Rocks were forced to abandon their stomping grounds.

It wasn’t long before large crowds gathered on Ocean Beach and the Great Highway was filled with vehicles as gawkers amassed to see the spectacle. Some even ventured up Point Lobos Avenue toward the fire for a closer look. No one could get close, though Engineer Temple of company 36 heroically stayed at his post by the fire hydrant to ensure a continuous stream of water despite nearby flames and having to turn his back to protect his face. Fellow firemen were spraying water on him to keep him safe. He was given much credit for ensuring that the conflagration did not reach the Sutro Baths. 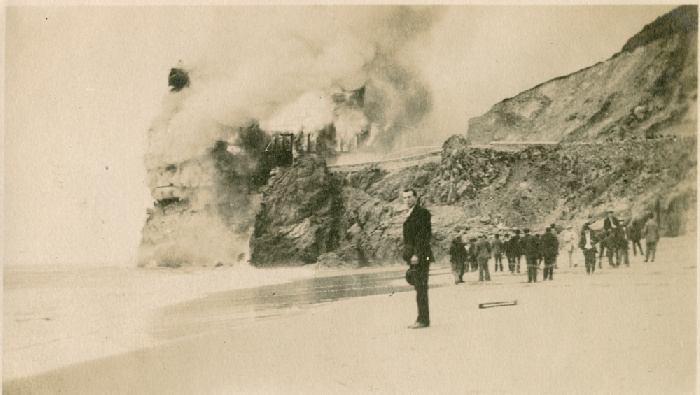 Another explosion occurred when stored painting materials and turpentine were touched by the flames. It wasn’t long before fire department personnel knew the Cliff House was lost and switched their efforts from fighting the fire to saving nearby structures, such as the Baths and Sutro Heights. In this effort, they were entirely successful. Only the Cliff House and the attached garage were lost. It was believed that steamfitters working in the basement may have accidentally left a fire pot burning or that a cigarette was accidentally discarded by flammable materials. The exact cause of the fire was never determined however. 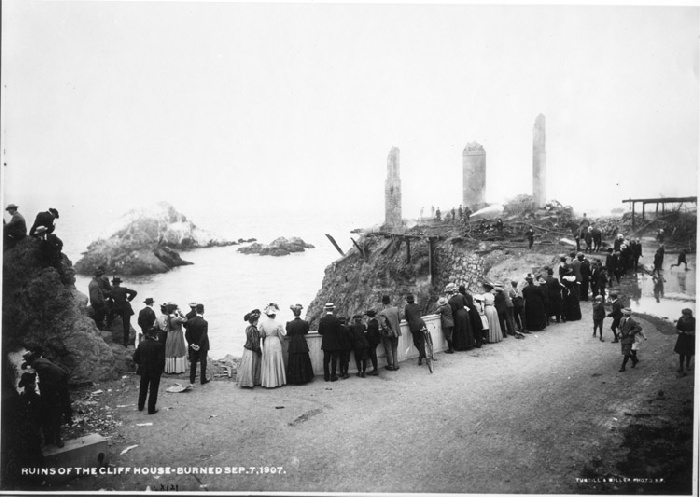 John Tait, who would later open Tait’s at the Beach further south on Ocean Beach, was leasing the Cliff House from the Sutro family at the time of the fire. He had spent about $50,000 on remodeling the Cliff House when it all went up in smoke. As Adolph Sutro had died nine years before, it was no longer up to him as to how to rebuild. That task fell to his daughter, Emma Sutro Merritt. She turned to the Reid Brothers to design a new Cliff House. Ironically, the Reid Brothers had designed the Hotel del Coronado which had served as inspiration for the second Cliff House. 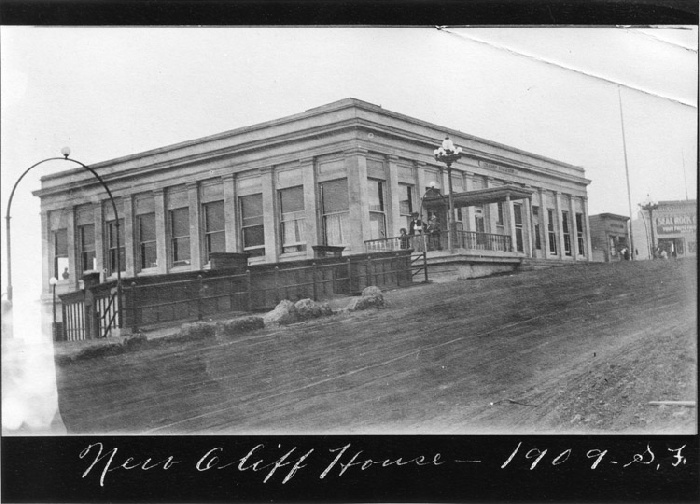 Unlike the Hotel del Coronado though, the Reid Brothers designed a more sedate building for the third Cliff House in a neo-classical style. The new building opened for business on July 1, 1909 with Tait still on board to run the establishment. Despite its short run on Lands End and no one left alive who visited it, the second Cliff House remains a favorite of the public as they imagine what it would be like to once more have such a magnificent structure by the ocean.