San Francisco street scenes have always been in a state of flux—buildings and infrastructure are regularly being built, adapted, or removed from the scene completely. Here is just a handful of once-memorable street images from around town that have changed considerably over the years. 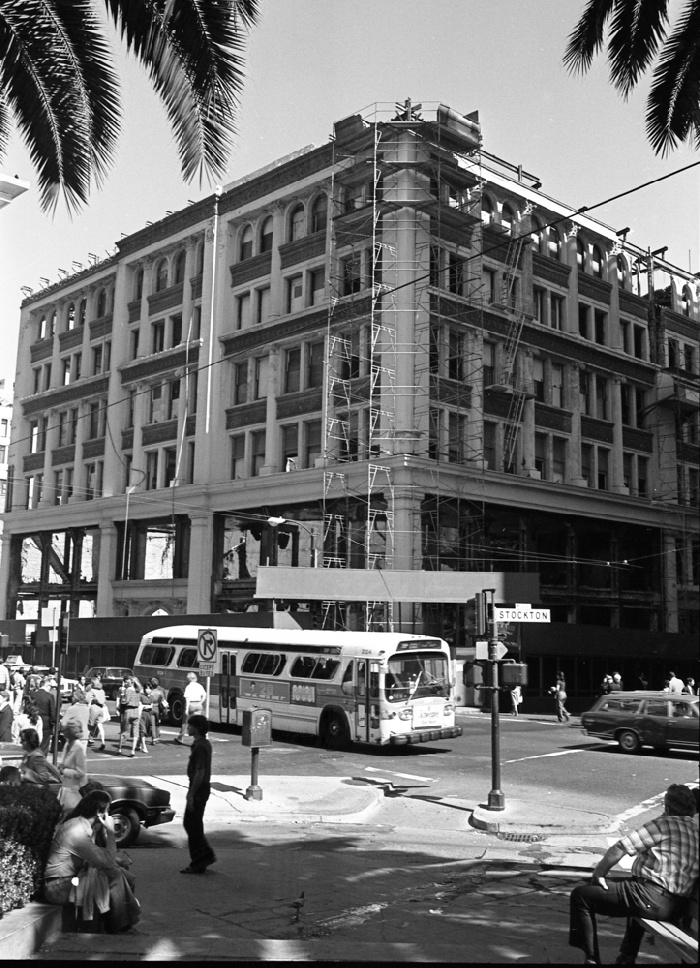 Founded in 1850, City of Paris was one of San Francisco’s oldest department stores. The main building (which later expanded into three additional adjacent properties) opened at the northeast corner of Stockton & Geary in 1896, and it was one of the few downtown structures whose outer walls survived the 1906 Fire. Known for its clothing, home accessories, and gourmet foods/wines, the main floor under the rotunda was home to San Francisco’s best-known Christmas tree each holiday season (read more in Streetwise from 2011). The building was threatened with demolition after the store closed in 1972, but won a brief reprieve when preservationists tried to save it. It was demolished in 1981 (shown here) by new owner, Nieman-Marcus, which built a new structure on the site, while incorporating the original rotunda and stained-glass dome into the design of the new building. 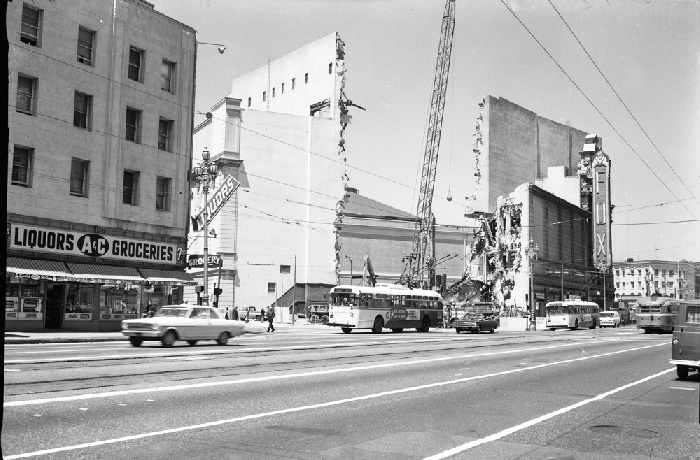 Built in 1929 during Hollywood’s heyday, the Fox Theatre, San Francisco’s largest and most elaborate movie house, began a steady decline in attendance with the advent of television in the 1950s. Owners were unable to find a buyer, but loyal preservationists managed to get a proposition on the City’s ballot in November of 1961, authorizing the City & County to purchase and operate the site as an entertainment/convention venue. Requiring just a 50% plus one YES vote, the proposition went down to defeat with nearly a 60% NO vote—leading the late San Francisco historian Paul Rosenberg to comment that it was NOT greedy property owners who sealed the fate of the glorious building, but rather the voters of San Francisco themselves. It was demolished in 1963 and replaced with Fox Plaza–a residential/office/retail complex. Read more about the Fox Theatre in this 2018 Streetwise. 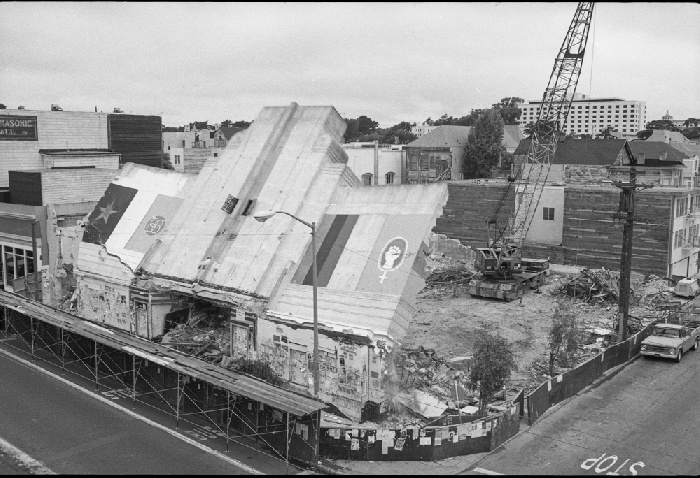 Constructed in 1937 at Haight & Cole Streets, the Haight Theatre was a local movie house until attendance began to wane in the 1960s, particularly after 1967’s Summer of Love. It was later renamed the Straight Theatre, but closed and was eventually demolished in 1979. There was significant neighborhood opposition at the time to a chain pharmacy that was planned for the site. Today, a Goodwill Thrift Store operates from the new building that was eventually constructed there. 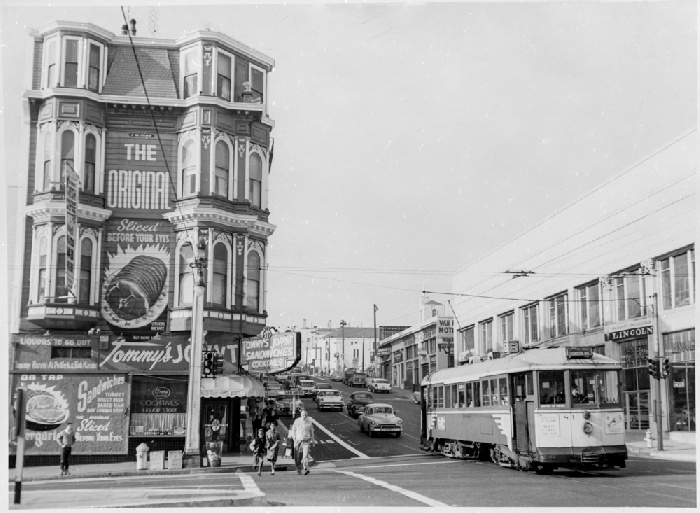 Popular eatery Tommy’s Joynt, also at Van Ness & Geary, used to be housed in a 4-story Victorian building painted bright red. In the late 1950s, the upper floors were removed, reportedly for structural reasons. The auto dealer located on the opposite corner to the right was removed circa 1959 to allow for construction of the Jack Tar Hotel which opened in the spring of 1960. It later became the Cathedral Hill Hotel that was later replaced by a new California-Pacific Medical Center. 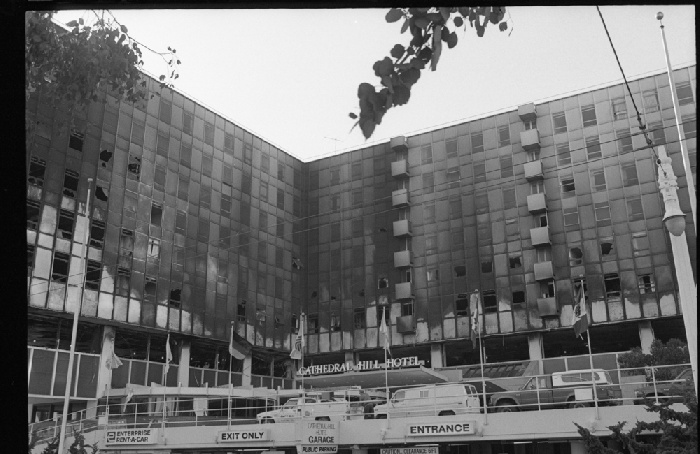 Originally opened on Van Ness Avenue between Geary and Post in 1960 as the Jack Tar Hotel, the structure was one of San Francisco’s first modern, post-World War II hotels, plus an adjacent office building. Renamed the Cathedral Hill Hotel in 1982, it suffered a devastating fire in December of 1983, in which two people were killed and 37 others injured, though the structure was restored and continued in business until it closed in 2008. Demolition began in 2013, and the site is now the home of the new California-Pacific Medical Center’s Van Ness Campus. 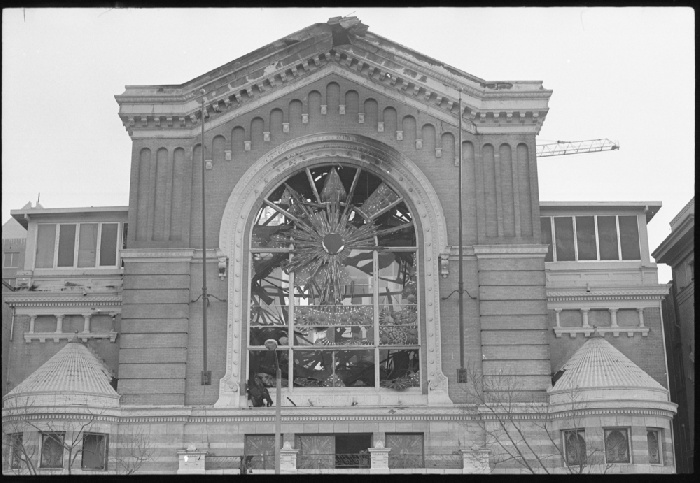 Built in early 1906 by Congregation Beth Israel and restored after the April earthquake, the building served the congregation until 1960s urban renewal reduced the membership significantly. Literally unused after the congregation aligned itself with another on Brotherhood Way, artist Tony Duquette acquired the old structure and converted it into a spectacular art gallery in 1987. His achievement was not long-lived, however, and the structure suffered a devastating accidental electrical fire in February of 1989 and was subsequently demolished. The site is now home a neighborhood Post Office. Note that this location was NOT the home of People’s Temple founded by Jim Jones—that organization was housed in an adjacent building that was known as the Albert Pike Memorial Masonic Temple. 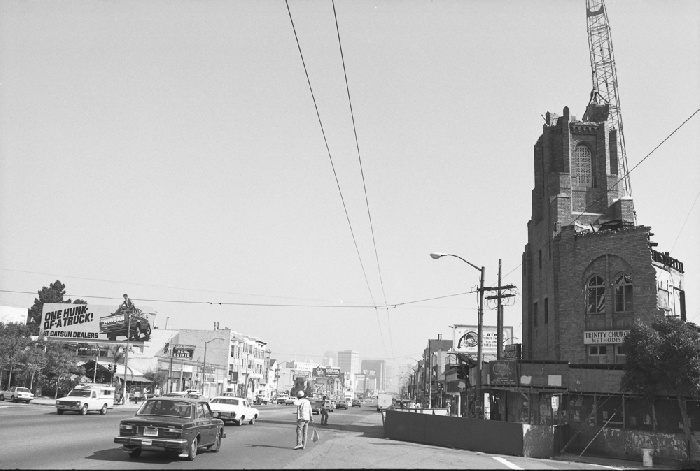 Built in 1929 at Noe & Market Streets, Trinity Methodist Church served a large local congregation. With declining membership numbers, the church began renting out meeting rooms in the 1970s. Sadly, the structure was destroyed in an arson fire on October 11, 1981 and the remains were eventually demolished two years later, as shown here. The site remained vacant until 2012 when a multi-unit housing complex was constructed there. 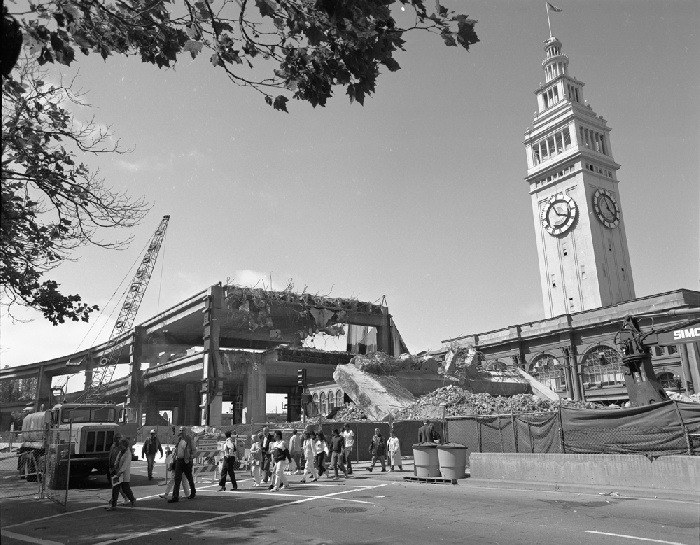 The Embarcadero Freeway came into being during San Francisco’s brief love affair with freeways, opening to traffic in 1959, with an unbuilt extension that was planned to carry traffic to the Doyle Drive approach to the Golden Gate Bridge. Public outcry against the Embarcadero was swift and the “Freeway Revolt” was underway, with the City’s Board of Supervisors voting to put further freeway plans on hold. The October 1989 Loma Prieta earthquake caused significant damage to the double-decked structure, and it was torn down nearly two years later, as shown in this image from July of 1991, replaced by a surface roadway and an expanded plaza area in front of the Ferry Building. 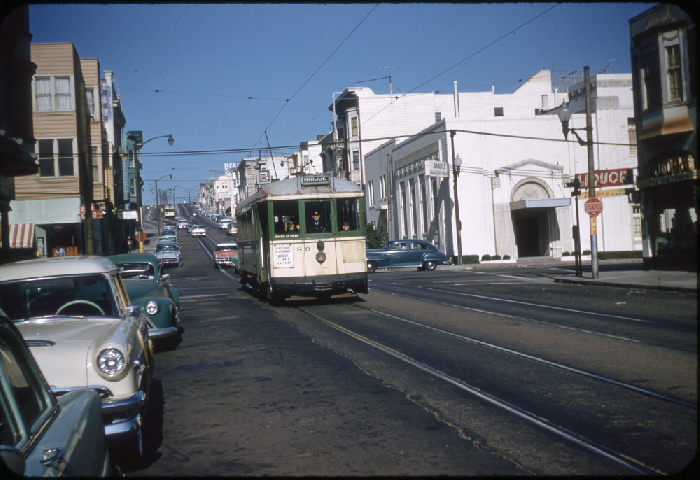 View west down Geary at Divisidero with Sinai Memorial Chapel at intersection, June 16, 1956. (wnp25.6103; Courtesy of a Private Collector)

The 1960s transformation of Geary from a street to a wide boulevard (running from Van Ness Avenue to Masonic Avenue) impacted hundreds of Western Addition homes and businesses. Here, at the corner of Geary & Divisadero, looking west on June 16, 1956, the original narrow layout of Geary is clear. Sinai Memorial Chapel, plus other businesses and home on the right-hand side of the image were largely unaffected by the street widening, though structures on the left were removed. Streetcar service on this line ended six months later in December of 1956. 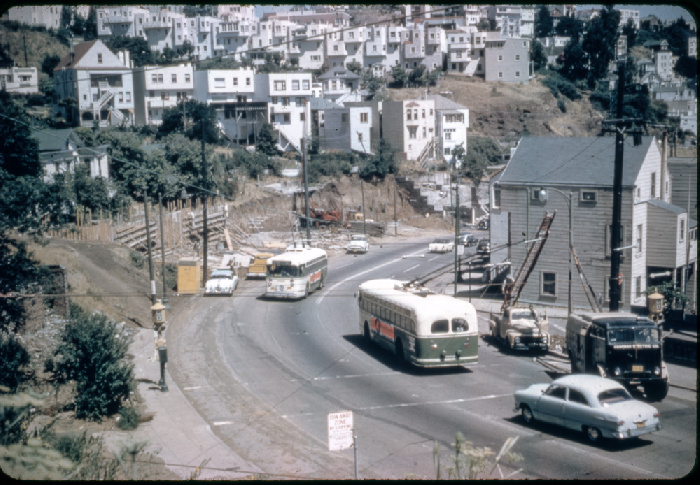 View north toward Market and 19th Street during Market Street widening, circa 1957. (wnp25.5089; Courtesy of a Private Collector)

In the late 1950s, there was an ambitious widening program for Market Street and Portola Drive, from Castro Street to St. Francis Boulevard, designed to move traffic between the downtown area and the West of Twin Peaks neighborhoods. Several hair-pin turns in both streets were straightened out, and many homes had to be relocated to accommodate the changed roadways. Here, Market Street is shown, near the intersection with Eagle and 19th Streets, in 1957, with construction underway. Note the vintage “birdcage” traffic signals at this intersection. 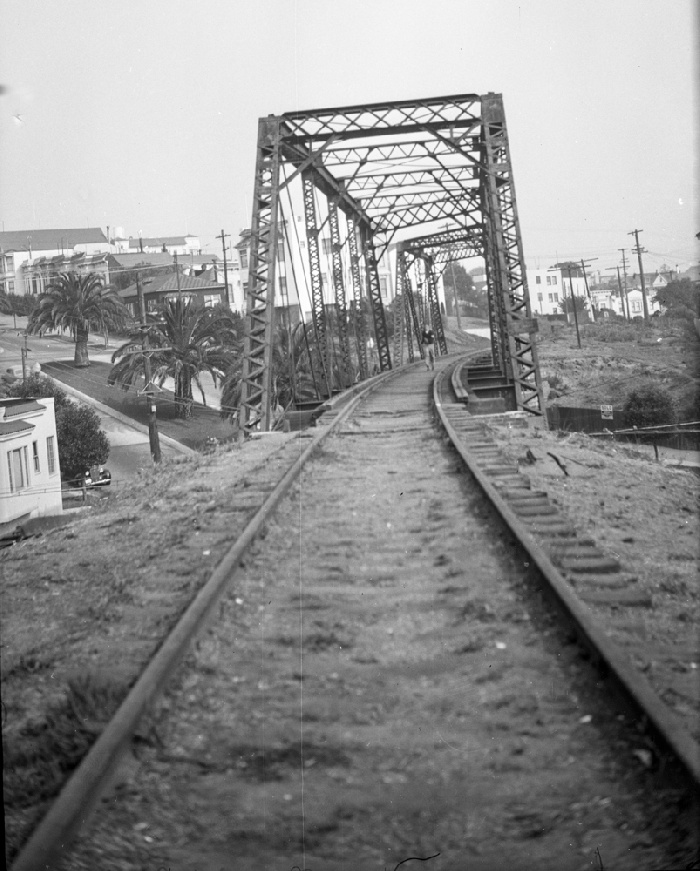 San Francisco and San Jose Railroad trestle across intersection of 27th and Dolores, circa 1937. (wnp28.1195; Courtesy of a Private Collector)

The San Francisco & San Jose Railroad Trestle (Southern Pacific Old Main), crossed the intersection of 27th and Dolores Streets, as shown here circa 1937. Long unused, after the mainline tracks was relocated years earlier, but it remained in place until after World War II. It was removed completely and the old right-of-way was developed as housing. Note the SOLD sign attached to the fence near the right-side anchor of the bridge. 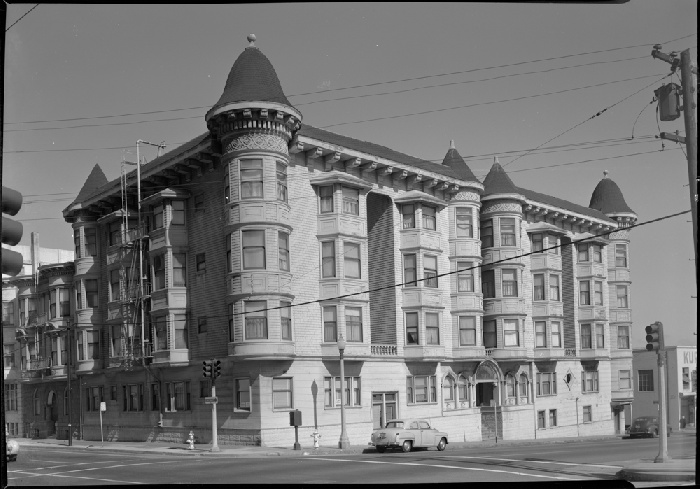 This June 8, 1956 image shows the Jefferson apartment building, constructed at 848 Gough Street between Turk and Elm overlooking Jefferson Square, plus additional homes to the left. Built in 1905, the housing was all demolished in the 1950s to make way for… 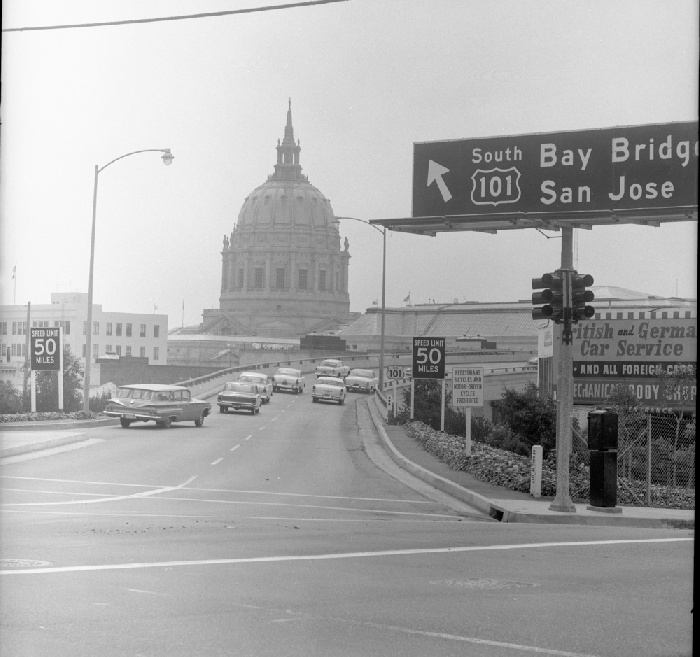 Central Freeway on-ramp at Turk and Gough with City Hall in the background, circa 1963. (wnp28.2777; Courtesy of a Private Collector)

…the Central Freeway that then snaked across Hayes Valley. This image shows the site as a freeway on-ramp circa 1963. Following the 1989 Loma Prieta earthquake, the freeway was removed, and a new, similarly shaped modern multi-unit housing complex was erected at the original site.