From France to a World’s Fair to a city cemetery turned city park and golf course, the Palace of the Legion of Honor has a fascinating history in addition to breath-taking views from its location on a hilltop above Lands End. We have this art museum in Lincoln Park quite literally because of a sugar mama. On a personal level, my introduction to San Francisco and art museums was the Legion of Honor thanks to high school French Club trips to the City that always started there. To learn how we got it, we first must go back to the 1915 Panama-Pacific International Exposition (“PPIE”). 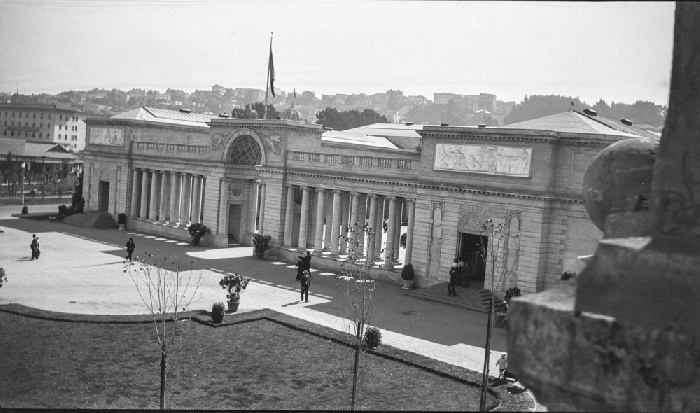 Though the name was tied to the opening of the Panama Canal the previous year, the 1915 PPIE was San Francisco’s announcement to the world that it had recovered from the 1906 earthquake. The world’s fair featured pavilions from various countries around the world. For its pavilion, France built a three-quarters temporary replica of the Palais de la Légion d’Honneur, which had been constructed in Paris in the 1780s. Originally built by architect Pierre Rousseau as the Hotel de Salm for a German Prince, it was nationalized and renamed after the French revolution. Then Napoleon made it the home of the Légion d’Honneur, the highest French order of merit. France decided the landmark would make a good face for the country at the PPIE. 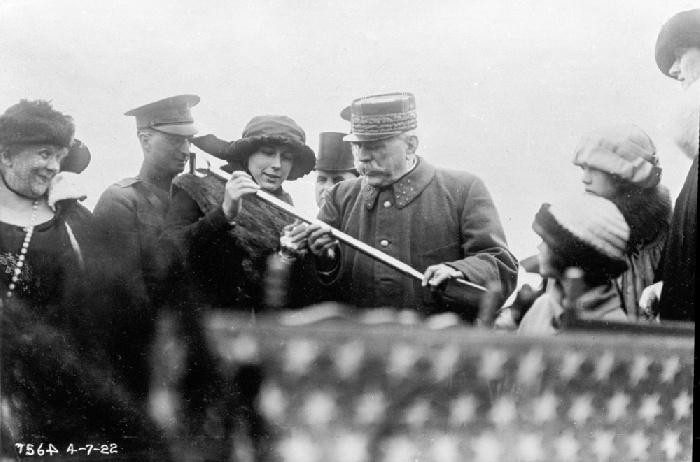 At the PPIE, Alma Spreckels, wife of sugar magnate Adolph Spreckels, fell in love with the French Pavilion. Already a noted art collector and major charitable influence in San Francisco society, Alma convinced her husband to fund the construction of a new art museum modeled on the French Pavilion as a way to honor Californians who died in World War I.1 They sought and received permission from the French government to build a replica in San Francisco. With World War I raging in Europe though, construction could not begin immediately. A site was chosen on a Lincoln Park and a cornerstone laying ceremony was finally held on February 19, 1921 with mayor James “Sunny Jim” Rolph acting as the master of ceremonies.2 During a state visit on April 7, 1922, French Field Marshal Joseph Joffre was presented with a gold shovel and planted a cypress tree by the construction site in a rainy ceremony.3 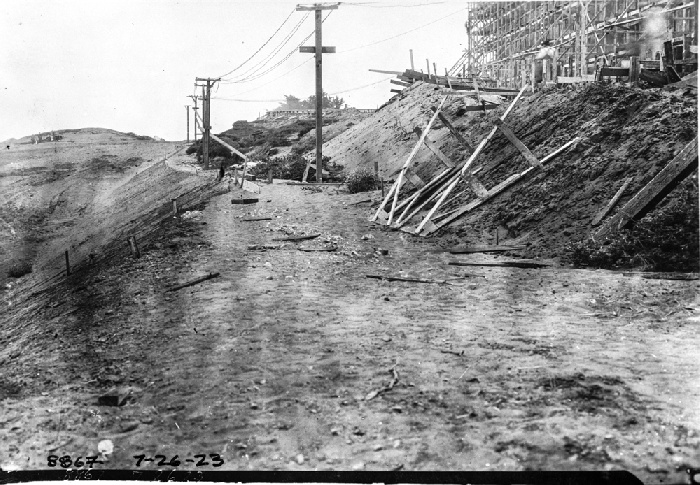 The Spreckels chose architect George Applegarth, who was essentially their personal architect, to draw up a design that mirrored the French Pavilion at the PPIE as a three-quarter scale reproduction of the Paris building. Unlike the temporary structure at the PPIE though, Applegarth incorporated the then very latest in museum construction ideas. This included 21-inch thick walls with hollow tiles to maintain a constant temperature inside and a heating and air filtration system that eliminated dust. The construction poured seven thousand cubic yards of cement and used a million pounds of reinforcing bar. 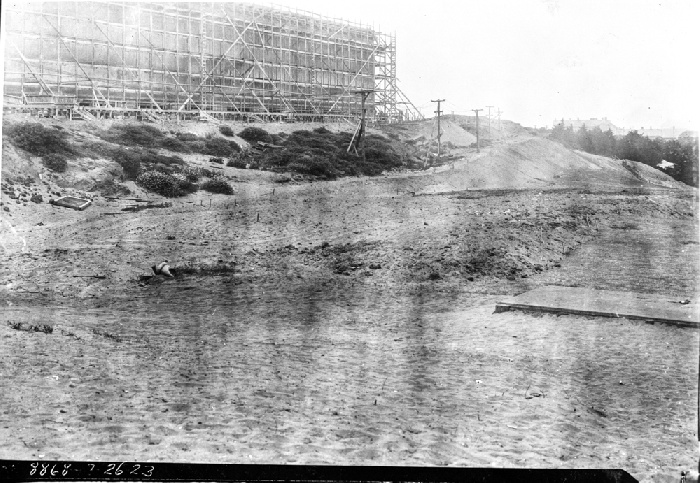 While construction was going on in Lincoln Park, the original Palais de la Légion d’Honneur in Paris opened an exhibition on June 7, 1923 of French art that was going to be donated to the San Francisco Palace of Legion of Honor.4 U.S. Ambassador to France, Myron Herrick, attended the opening ceremony and said that Californians would be ever grateful to France for appropriating money for the French Pavilion at the PPIE soon after being attacked by Germany at the outset of World War I. The collection of art being donated by France included 11 Rodin sculptures, a marble copy of the Louvre’s Winged Victory of Samothrace sculpture, a series of Jean Paul Laurens’ tapestries depicting Joan of Arc’s life, and many other works. 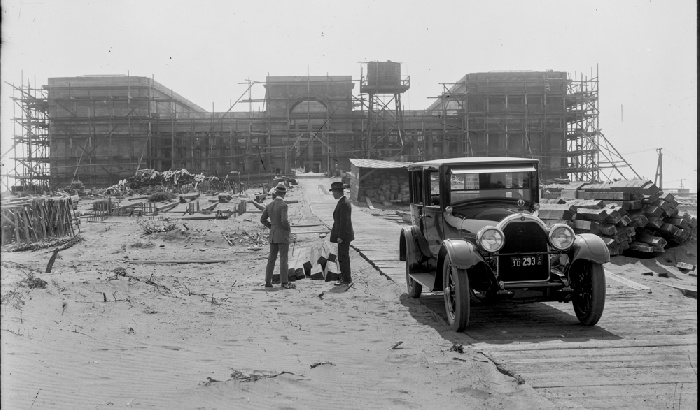 Besides the French artwork, Alma collected donations from other European countries during a five-month jaunt to the continent in the spring and summer of 1923.5 The Queen of Romania donated mannequins costumed in dresses once worn by her grandmother, Queen Victoria of England. General Joffre, who had visited the year before, donated a uniform he wore at the turning point Battle of the Marne in World War I. Alma also visited the Palais de la Légion d’Honneur exhibit and declared it impressive. She also said it was “remarkable” how European nations were cooperating with the Legion of Honor. 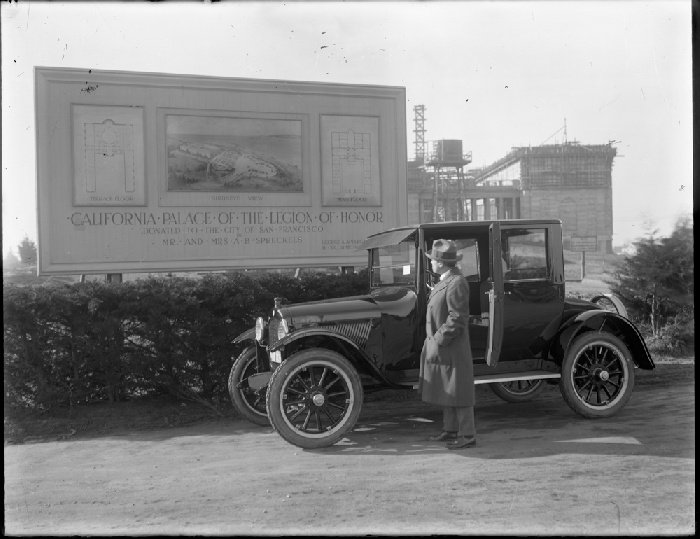 Sadly, Alma’s husband, Adolph Spreckels, did not live to see the opening of the Palace of the Legion of Honor. On June 28, 1924, Adolph dies suddenly from a hemorrhage that he suffered after being sick with a cold for several weeks.6 Mayor Rolph declared that the Legion of Honor would serve as an “ever-enduring monument” to Adolph, who served as a Park Commissioner for the City. Although the Legion of Honor was to be a gift from Alma & Adolph Spreckels to San Francisco, the City determined late in the process that it should have a public vote on whether to accept and manage this gift.7 Fortunately, the amendment passed by an overwhelming 73,500 vote margin at the November 4, 1924 ballot.8 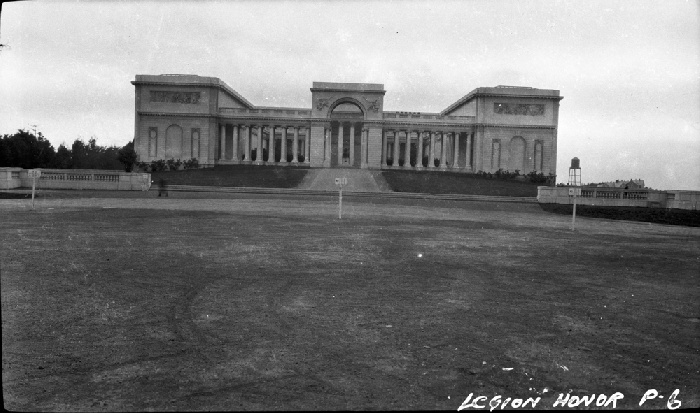 Palace of the Legion of Honor after construction, circa 1924. (wnp14.0020; Courtesy of a Private Collector)

On the morning of November 11, 1924, the Palace of the Legion of Honor was officially dedicated and turned over to the City of San Francisco.9 The date was deliberately chosen to be Armistice Day since the museum was dedicated to those who fell during World War I. California Senator Samuel Shortridge delivered the keynote address, calling the Palace a masterpiece of architecture and an apt memorial for those who fought in the war. French Councillor Albert Tirman delivered praise for the monument and thanks for America’s assistance in the war that France would “never forget.”

As San Franciscans know, the Lincoln Park location of the Legion of Honor once was home to City Cemetery. When the cemetery was removed to make way for the park and golf course, not all the bodies left. During the construction of the museum, more than 1500 bodies were uncovered.10 Many of them were covered up and left in place. Some workers refused to touch the bones. Years later, during a post-1989 earthquake renovation, almost 500 more bodies were discovered.11 Chances are more bodies lie beneath one of San Francisco’s premiere art museums, an eerie reminder that the Palace of the Legion of Honor is a monument to those lost at war.

1. “History of the Palace of the Legion of Honor.”