When it opened in April 1879, the Conservatory of Flowers became Golden Gate Park’s first “attraction” and quickly a favorite of visitors.1 The structure had been purchased by James Lick from Lord & Burnham’s in New York in the early 1870s. Lick died on October 1, 1876, before it could be constructed. The Society of California Pioneers then received the conservatory from Lick’s estate. They sold it to some prominent San Franciscans, who in turn donated it to the City for construction in Golden Gate Park. 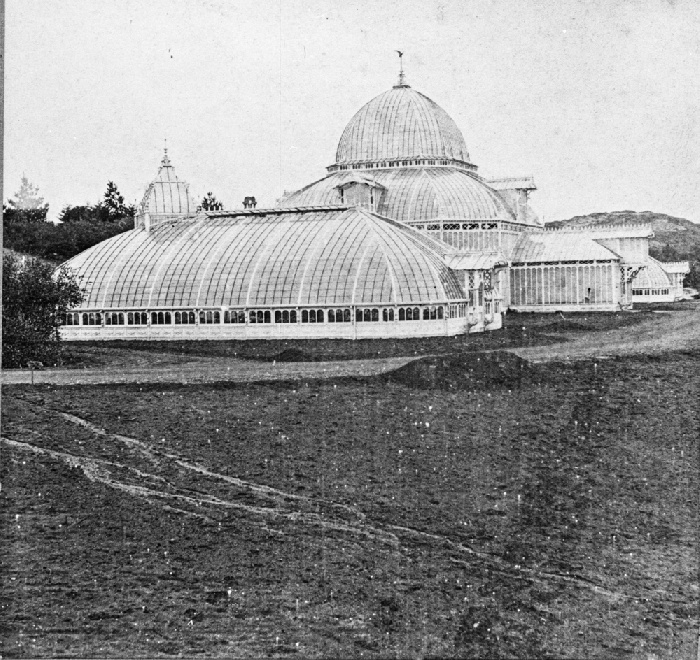 In its original incarnation, the Conservatory of Flowers featured two fountains, one in the entryway and another in the Palm Room under the dome. The west wing’s two galleries displayed flowering and ornamental foliage and hardwooded plants. In the east wing, there was an Orchid House and aquatic plant gallery. The latter held the famed Victoria regia, a giant water lily, the first to be grown in California. 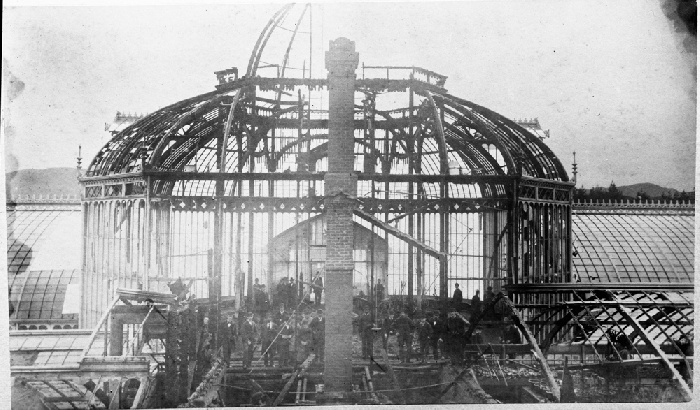 View of fire damage to Conservatory of Flowers and dome, January 1883. (wnp26.1318.jpg; Courtesy of a Private Collector)

At the rear of the structure was a half-story furnace room that was used to maintain temperatures for various plants. At approximately 9:30 a.m. on Friday, January 5, 1883, a fire broke out in this furnace room.2 The wooden structure in the dome section of the Conservatory was quickly consumed with flames. Unfortunately, there were no fire hydrants in the area yet and the Golden Gate Park firehose lacked sufficient pressure to reach the upper portions of the facility. The dome’s glass ceiling eventually shattered and shards fell on the plants below. 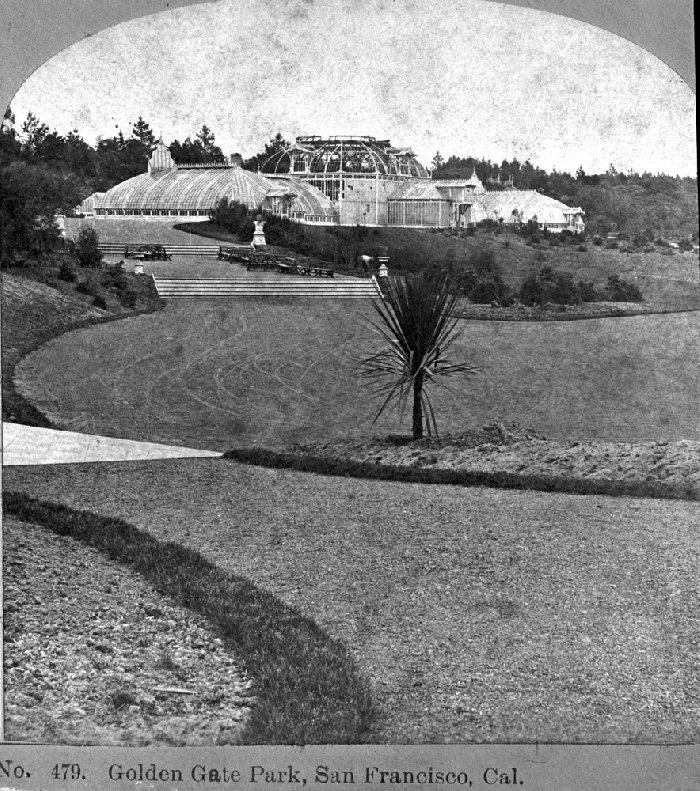 Firefighters did manage to save the Conservatory’s wings, but the dome section was largely destroyed. Damage was estimated to be about $10,000-15,000 to repair. The cause of the fire was undetermined.3 Most of the plants lost in the fire were thought to be easily replaceable, except for a “magnificent” orchid that had been in full bloom near the entrance. Fortunately, weather was favorable at the time for plants that otherwise needed heat from the destroyed furnace. 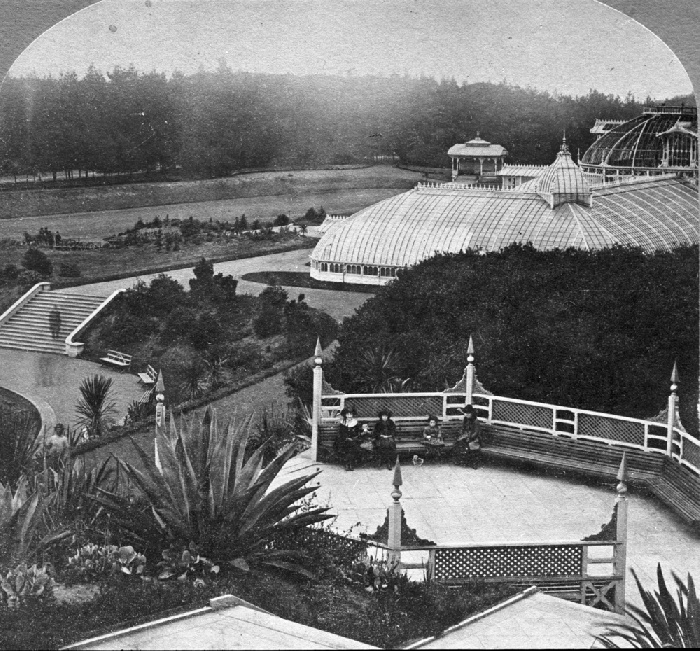 In their annual report delivered ten days after the fire, Golden Gate Park Commissioners recommended repairing the conservatory and installing a nearby water main to prevent future “calamity.4” Reconstruction did not begin immediately, however, as the City lacked the funds to appropriate for it.5 Fortunately, help would soon arrive. 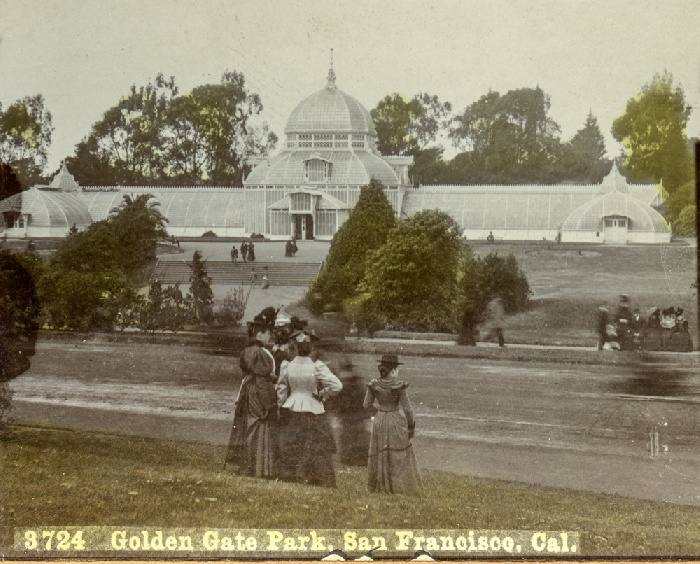 Charles Crocker, one of the founders of the Central Pacific Railroad, who later took control of the Southern Pacific Railroad with his partners, stepped up for the cash-strapped City. In the Summer of 1883, he donated $10,000 to repair the Conservatory.6 The work began in mid-July 1883 with one significant change to the design.7 The dome was raised by 25 feet to accommodate the expected growth of the palms. In addition, the eagle filial atop the dome was replaced with one of the planet Saturn, which was named after the Roman god of agriculture. 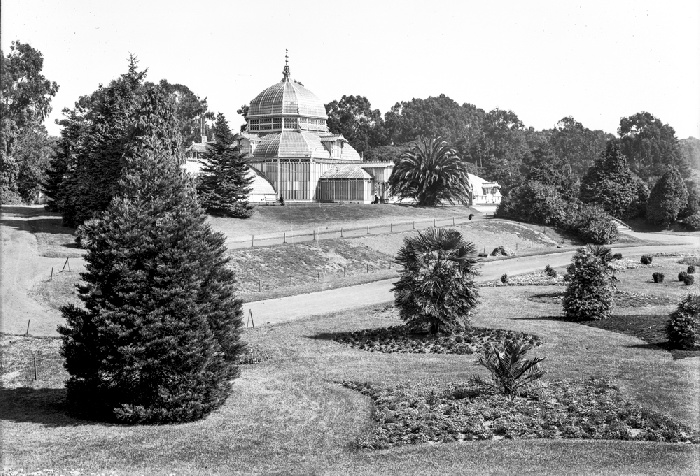 View northeast to Conservatory of Flowers, circa 1890. (wnp15.998; Courtesy of a Private Collector)

Another fire that also started in the furnace room partially damaged the dome section of the Conservatory on April 1, 1918.8 Although the fire department acted quickly, a portion of the glass dome collapsed again. However, the overall damage was not as extensive as the 1883 fire and the structural damage, exclusive of the value of damaged plants, was estimated to be about $3,000. Fortunately, there have been no further fires in the just over 100 years since then. The entire building went through a restoration effort in the early 200s and the Conservatory of Flowers remains a major attraction of Golden Gate Park.