San Francisco, with its temperate climate has long been a place where residents have had an appreciation of flowers. From commercial greenhouses in the Portola District and along Alemany Boulevard in the era before World War II to front and back yards in every neighborhood, the City burst forth with color every Spring.

Downtown San Francisco was once home to dozens of sidewalk flower stands, often located close by one another, with all of them doing a thriving business. Many of these have disappeared in recent years, for a variety of reasons including operating costs, low margins, and construction projects such as the Central Subway along Stockton Street.

Parks and open spaces such as Union Square itself and Civic Center Plaza have undergone renovations over the years that provided more open space, though often with a reduction in plantings.

Here are some of the memorable images from the OpenSFHistory photo archives that provide a glimpse into some colorful year-round San Francisco scenes from the past. 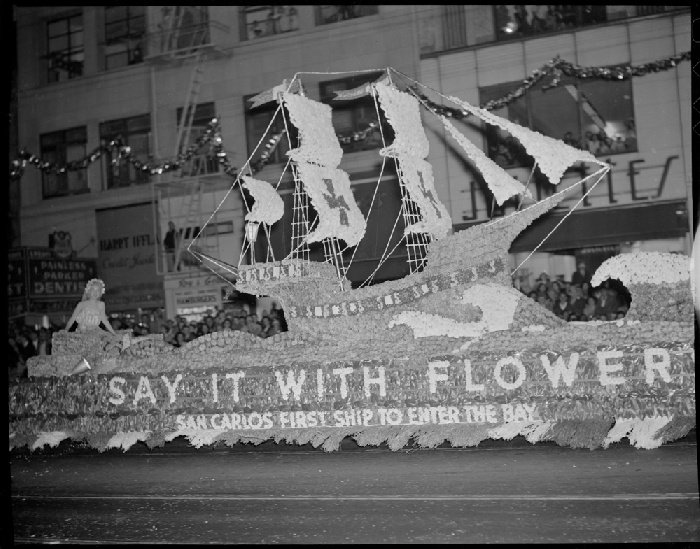 The Portola Festival on Market Street in October of 1948 included many flower-laden floats. Read more in Arnold Woods’ closer look at the parade. 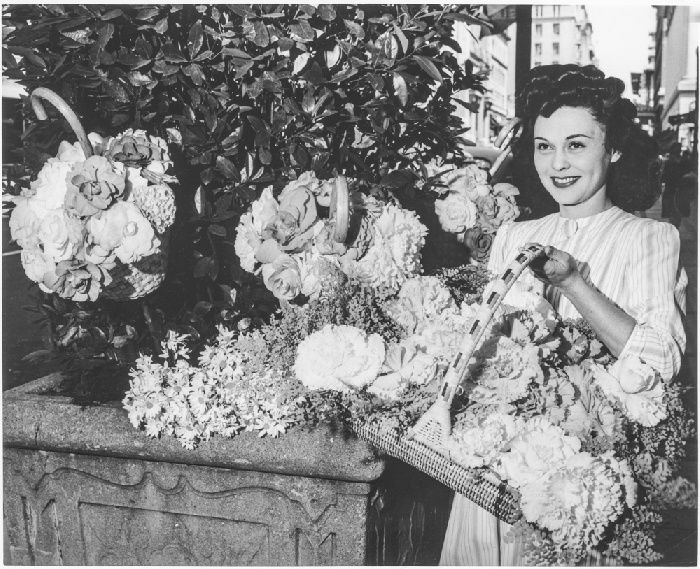 The Podesta-Baldocchi Floral Shop on Grant Avenue was a long-time downtown fixture featuring dazzling displays that changed with the seasons of the year. The shop was closed in the early 1990s and operated thereafter from a warehouse location. The company was then absorbed by a large floral corporation in 1999 and the name disappeared from local use. 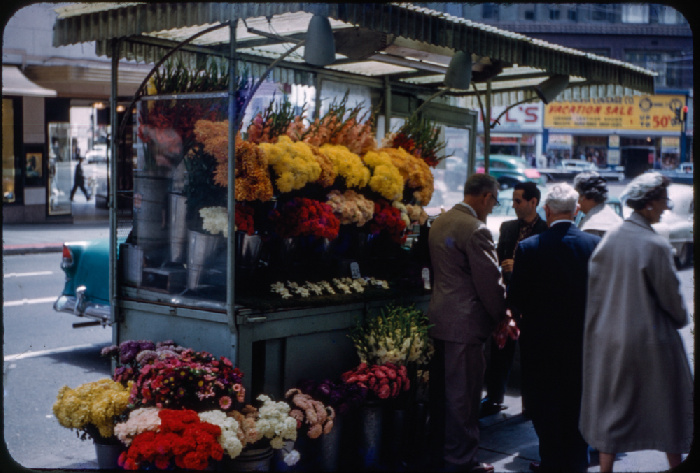 View south to flower stand with corrugated fiberglass roof and spotlights on Stockton Street near Ellis, circa 1959. (wnp25.3596; Courtesy of a Private Collector)

Downtown San Francisco was once home to more than four dozen sidewalk flower stands, including this one at Stockton & Ellis Streets in 1959. Construction of the Central Subway in recent years caused many of the stands on Stockton Street to close. 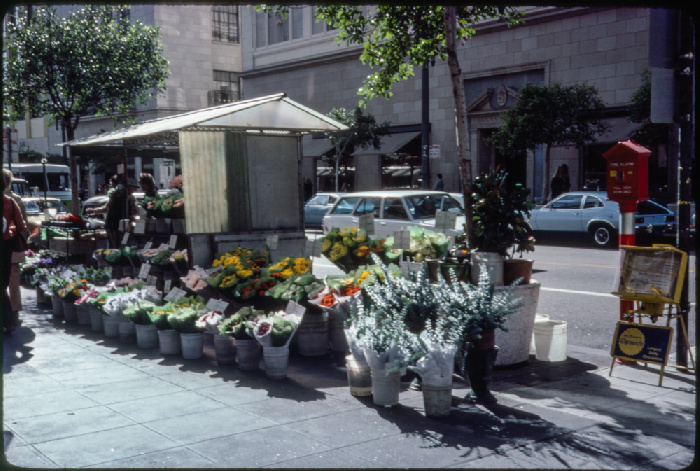 This flower stand business operated on Grant Avenue near Post Street in November of 1977. 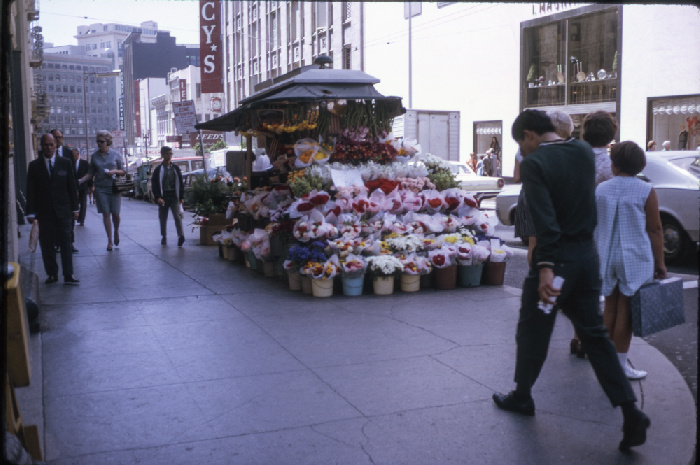 Flower stand on corner of Stockton and Grant, August 1969. (wnp25.6729; Courtesy of a Private Collector)

This stand operated for decades on the northeast corner of Stockton and Geary, adjacent to the City of Paris department store, shown here in August of 1969. Another operated directly across the street at the northwest corner adjacent to the I. Magnin store. 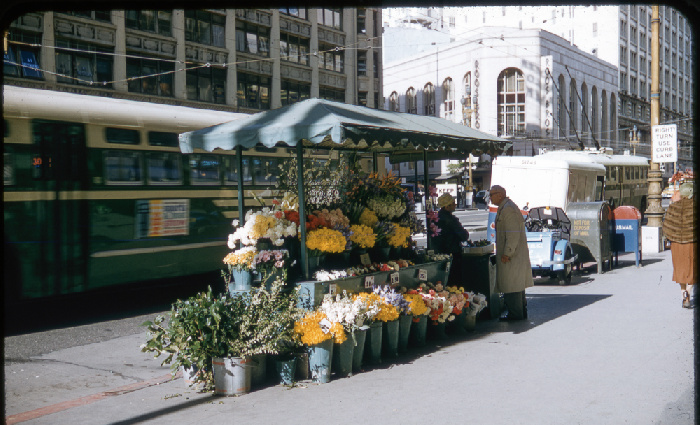 View northeast from sidewalk to flower vendor stand with canvas roof at Market and Stockton, March 1958. (wnp25.4891; Courtesy of a Private Collector)

This stand, shown in 1958 on Market Street near Stockton street, was only one-half block from several other stands—all of which did a steady business. 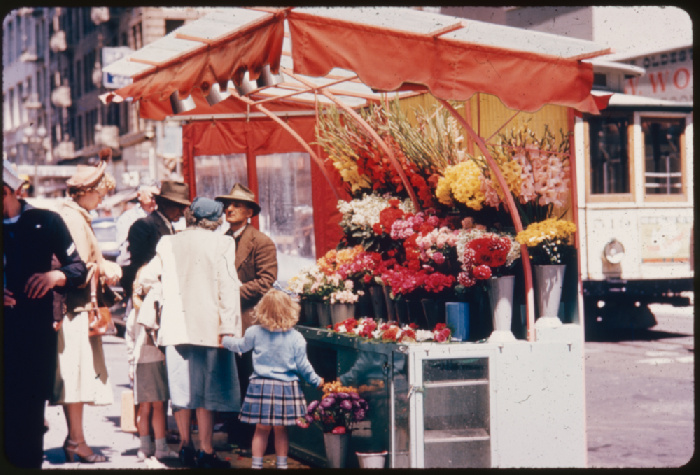 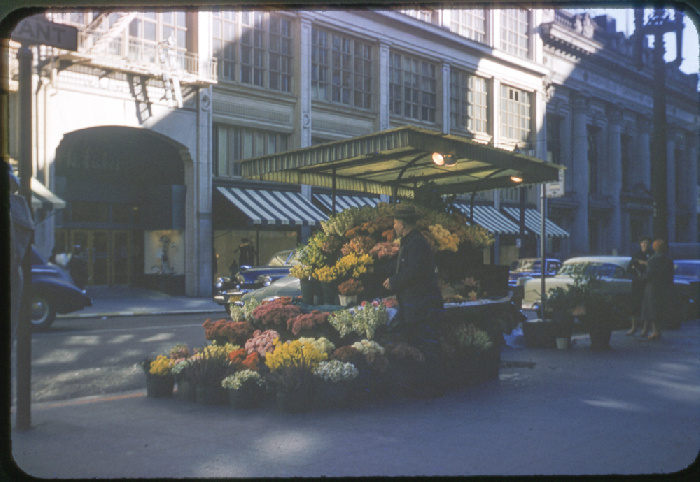 View southeast across Grant past sidewalk flower stand with corrugated fiberglass roof on Grant near Geary, January 1957. (wnp25.4992; Courtesy of a Private Collector)

Sixty-five years ago, in January of 1957, this stand on Grant Avenue near Geary Street displayed a colorful assortment of blooms even in Winter. 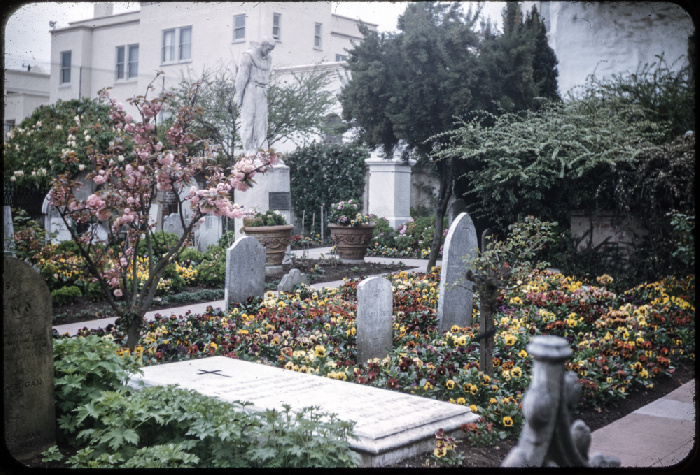 Although highly colorful, Mission Dolores Cemetery, shown here in 1952, has been renovated over the years with plantings that are more historically accurate to the location’s early years circa 1800s. 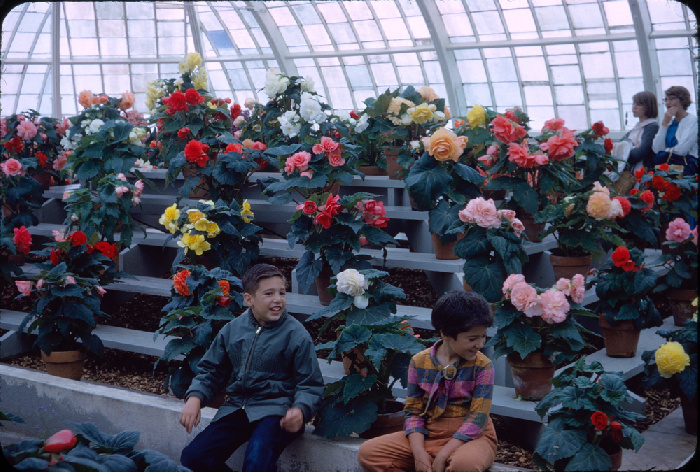 Richard and Laura Brandi inside the Conservatory of Flowers, circa 1962. (wnp010.10086; Andrew Brandi, photographer – Courtesy of Richard Brandi)

The Conservatory of Flowers, shown here in 1962, has been operating in Golden Gate Park since it opened in 1879. 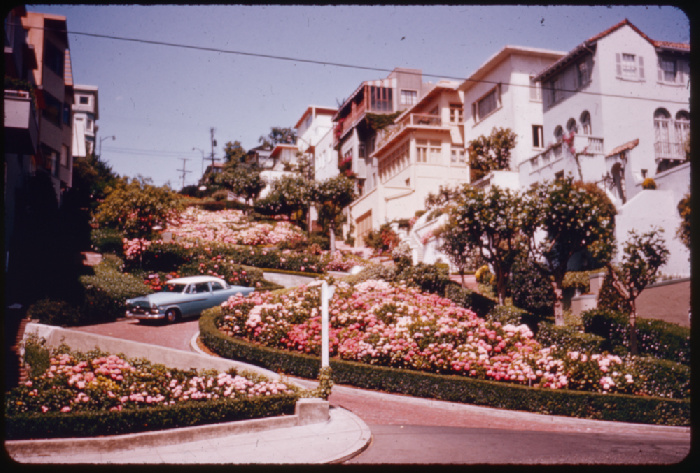 Lombard Street was ablaze with pink in the 1950s. 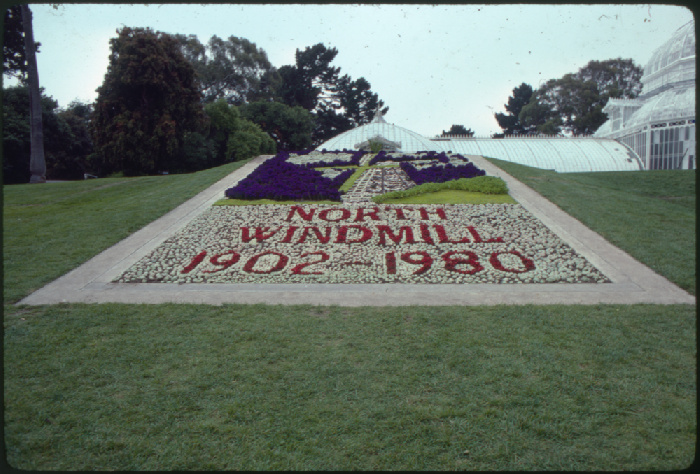 The area in front of the Conservatory of Flowers in Golden Gate Park is home to a changing floral display depicting local history—shown here in 1980. 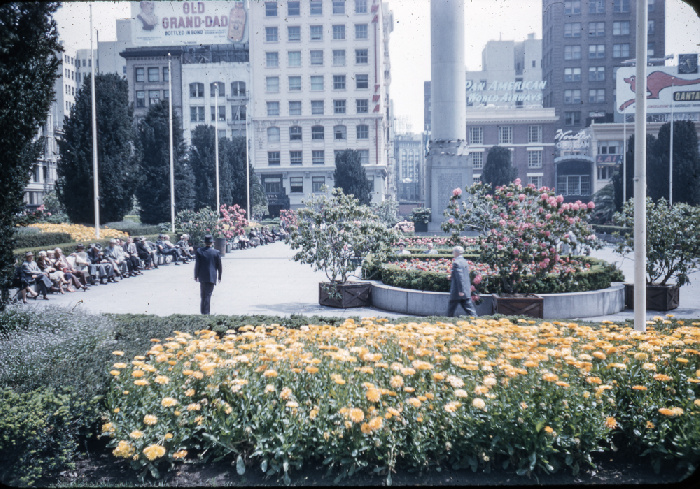 Prior to a $25 million renovation that began in January of 2001, Union Square was home to far more flora and fauna—-shown here in 1957. 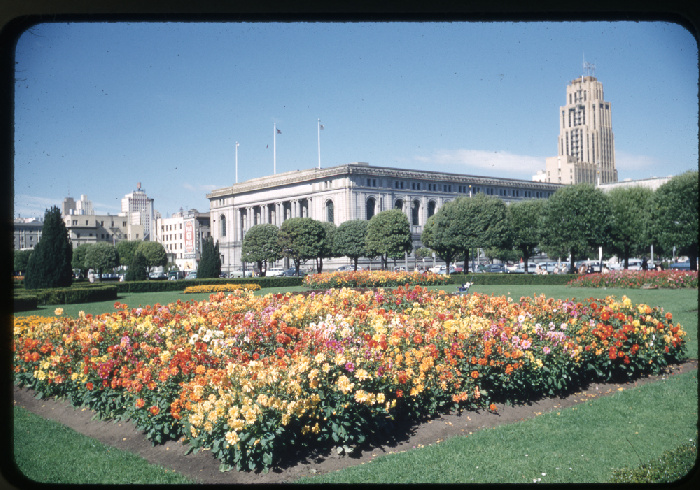 Civic Center Plaza has undergone numerous landscape changes over the years, particularly when the underground parking garage was built in 1959-69. Lawns and flower beds filled the area at the time of this image in 1955. 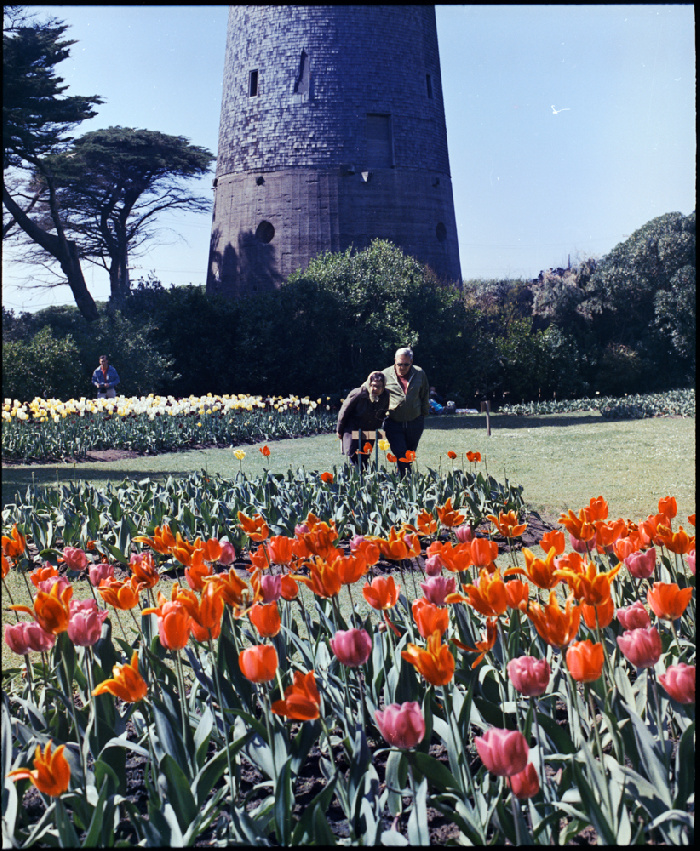 The garden, adjacent to the Dutch Windmill at the north end of Golden Gate Park near the Great Highway is at its most vibrant in March of each year, as shown in this 1975 image. 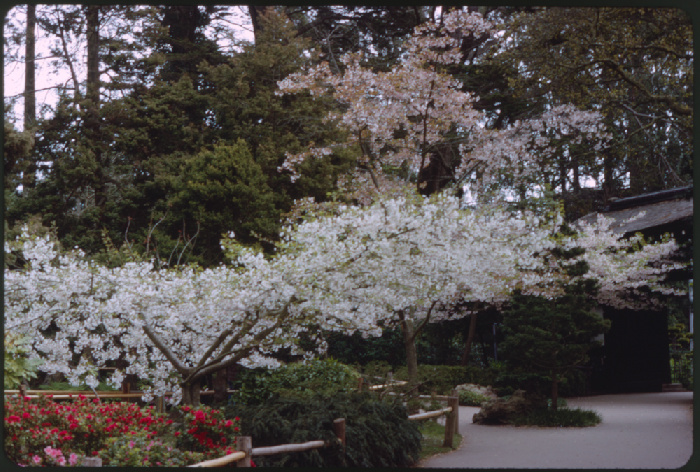 Blossoming trees in front of the Japanese Tea Garden in Golden Gate Park, circa 1965. (wnp25.6338; Courtesy of a Private Collector)

The Japanese Tea Garden in Golden Gate Park bursts forth with blossoms in February/March each year, as shown in this 1965 image. 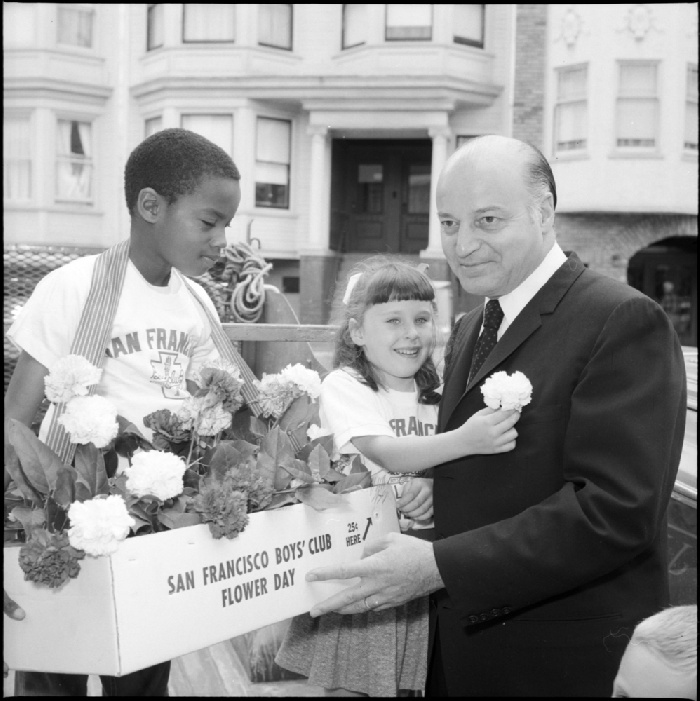 San Francisco Mayor Joseph Alioto, who served from 1968 until 1976, is shown here in a promotional photo for Flower Day on June 21, 1969. Well-dressed San Francisco men and women at the time often wore a boutonniere or a corsage.