The annual celebration of Easter by many Christian denominations is upon us. While we typically think of the day as one spent dressing up and going to a church for an Easter mass, for many locals, it is a day spent dressing up and taking a hike to the highest spot in San Francisco. For almost 100 years, an Easter service has been held by the cross at the summit of Mt. Davidson.

Plaque at base of Mount Davidson cross, November 22, 2015. (Courtesy of Arnold Woods)

On April 1, 1923, Sunset District resident George Decatur, who worked at the Western Union Telegraph Co. and was a director of the YMCA, organized an Easter sunrise service at the top of Mount Davidson, the highest point in San Francisco.1 Decatur raised $1,100 in donations to build a 40-foot wooden cross for the service.2 Over 5000 people made the hike up for the Easter mass despite rainy weather. Boy Scouts camped out the night before and kept bonfires burning along the path to the top. 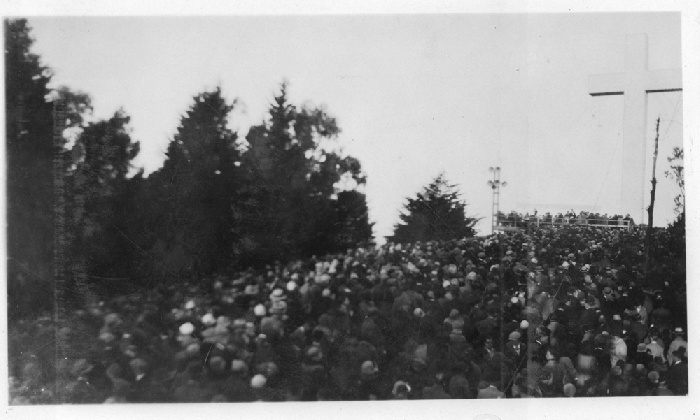 The 1923 Easter service was well-received and Decatur got further donations to build a bigger and more permanent cross for the 1924 service. However, that 87-foot cross burned down a year later and Decatur found himself having to solicit donations yet again for a third cross. At the same time, various people and organizations were advocating for a city park to be established on Mount Davidson.

There was a huge grassroots campaign seeking the city park. In 1927, San Francisco appropriated $15,000 to purchase and preserve 20 acres on Mount Davidson as a park. The new city park was dedicated in 1929. Decatur also raised enough funds for a new 76-foot cross to be erected in time for Easter that year. The new cross was set in concrete and covered in stucco and 300 lights.

Despite the improvements to the new cross, it also burned down after two years. A temporary cross was quickly built, but the Native Sons and Native Daughters of the Golden West went into action to fundraise for a new and hopefully more fire-resistant cross. At the 1932 sunrise service, former San Francisco Mayor and current California Governor James “Sunny Jim” Rolph dedicated the cornerstone for the new cross. Placed inside the cornerstone was a transcript of the first deed of title to Mount Davidson that had been signed by the first Mexican governor of California. 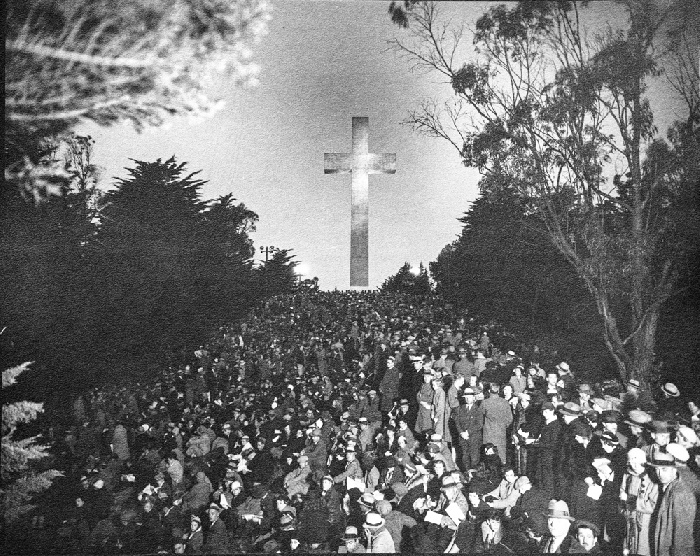 This new cross was dedicated on Saturday, March 24, 1934, a week before Easter. It was built out of concrete and steel and was 103-feet tall, tapering from 10 feet wide at the base to 9 feet at the top. The arms measured 39 feet across. It sat on top of a foundation that extended down 16 feet into solid rock. Clearly, they were not going to have a cross that would burn down again. For the dedication, President Franklin D. Roosevelt pressed a telegraph switch in Washington, D.C. that turned lights on the cross where a crowd of 50,000 people had amassed to watch. 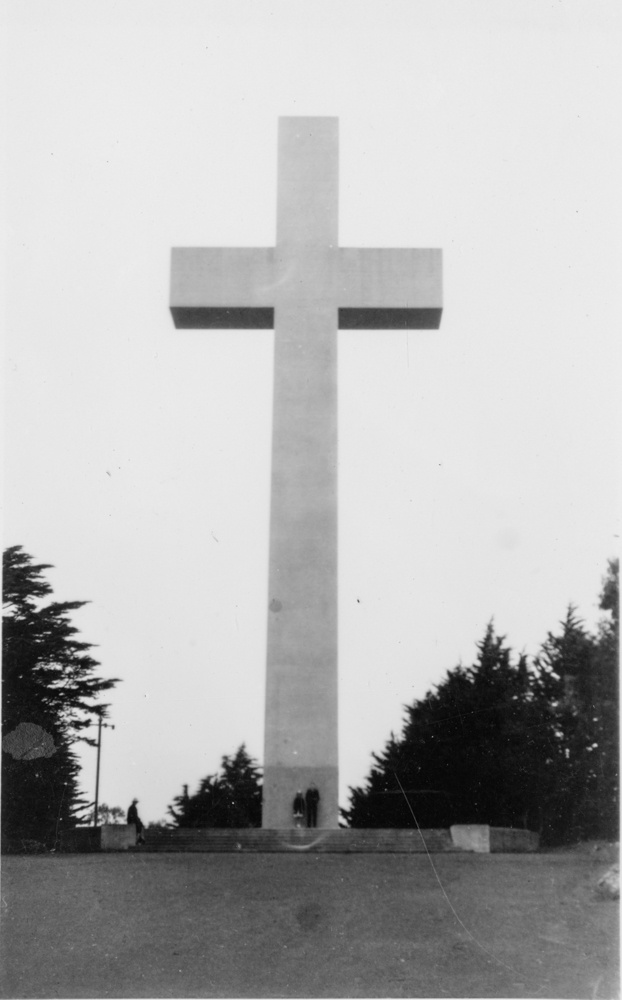 As was intended, this cross proved sturdy and remains in place today. Legal issues eventually arose because of the presence of a cross on public land, so the land where the cross sits was sold to the Council of Armenian American Organizations of Northern California for $26,000 at an auction on July 12, 1997.3 They maintain the cross to this day. Each year, the tradition of an Easter service being held at the cross at sunrise continues.