San Francisco has long prided itself as the financial center for the entire West Coast. Over the years, there have been many changes as local institutions have grown, merged, and sometimes disappeared completely from the landscape. In addition, electronic transactions have greatly reduced the need for customers to visit brick-and-mortar locations, thus resulting in further consolidations and closures of well-known bank buildings. Here are a few examples—both downtown and in some neighborhoods—of historic and memorable structures and what has become of them over the years. 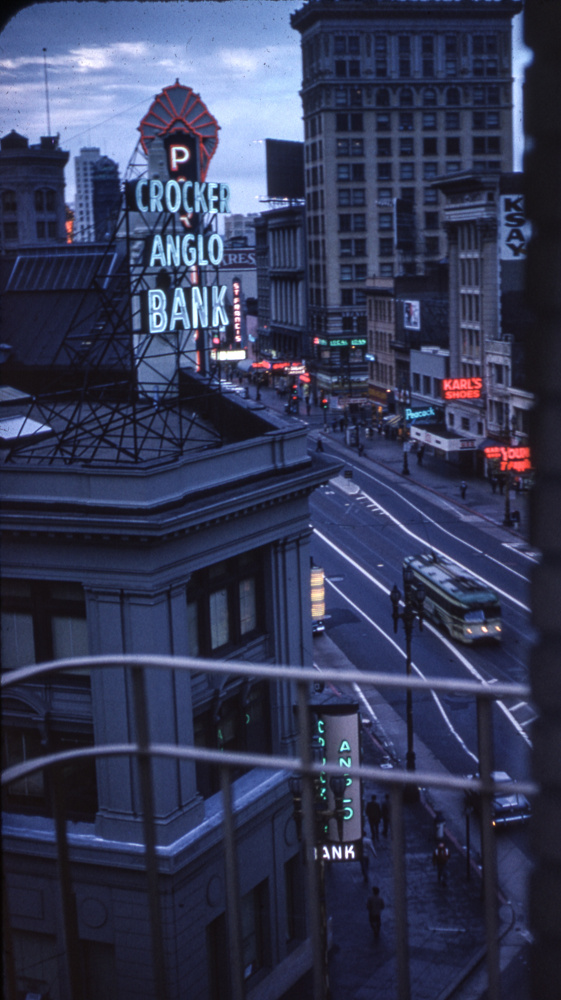 1098 Market Street – 1098 Market Street at the northeast corner of Market and Jones Streets was home to Prager’s Department store in the 1890s. Lost to the events of 1906, Pragers was rebuilt in 1911. By 1925, the owner decided to retire, even though business was good. The Anglo-California National Bank then moved into the space. The name of that banking institution changed several times over the years (Crocker-Anglo, Crocker-Citizens, Crocker Bank, Crocker National Bank), and in 1981, Crocker was acquired by UK’s Midland Bank, which was then acquired in 1986 by Wells Fargo and the branch was closed. Today, a variety of small businesses are among the building’s tenants, including a long-time check-cashing service on the ground floor. 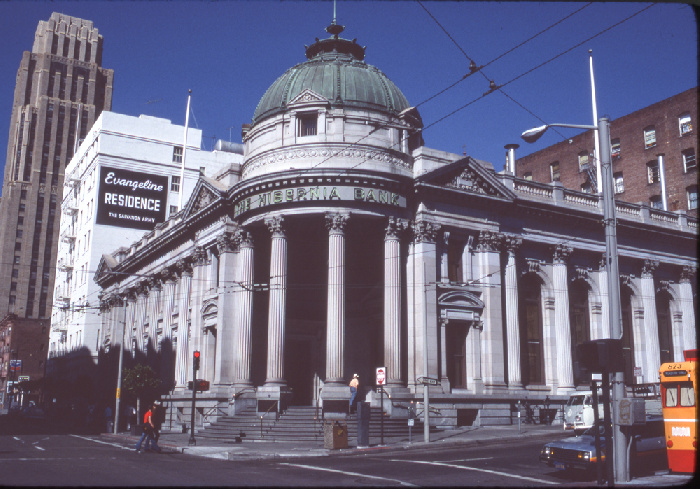 1 Jones Street – Designed by noted architect Albert Pissis and opened in 1892, the ornate marble-clad lobby and enormous vault doors at 1 Jones Street exuded strength and security to customers. The building survived the 1906 Earthquake and Fire and Hibernia was considered a beloved institution in the City’s Irish-American community for decades, even though it was slow to expand its branch network. In later years, however, the location on the edge of the Tenderloin proved problematic, and Hibernia closed the building in 1985, though the green neon signage remained in place above the entrance. Security Pacific Bank acquired Hibernia in 1988, and then Security Pacific itself was acquired by Bank of America in 1992, with 1 Jones remaining vacant. Vandalism of the exterior was commonplace until the site was acquired by SFPD for its Tenderloin Task Force from the 1990s until the year 2000. The building’s ownership subsequently passed through many more hands until 2016 when the site underwent a $15 million preservation and earthquake retrofit, emerging as downtown’s newest event venue. See photos of the restored interior spaces. 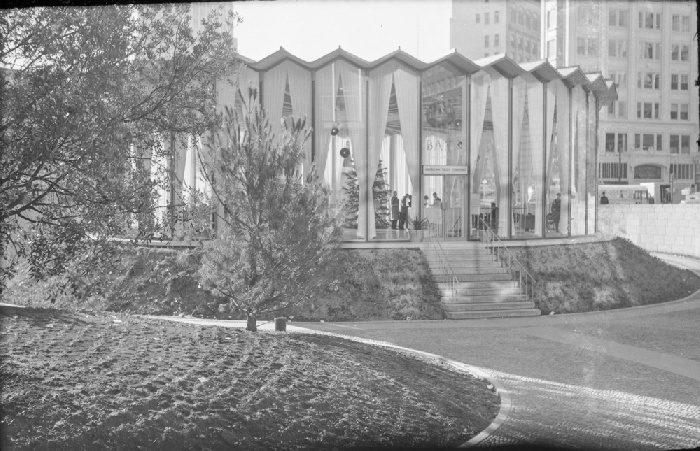 Crown-Zellerbach Pavilion at Market and Battery, circa 1959. (wnp14.2087; Courtesy of a Private Collector)

Crown-Zellerbach Pavilion – A branch of American Trust Company (later acquired by and renamed Wells Fargo) occupied Crown-Zellerbach Pavilion in 1959. Thought to be the only round, glass-walled bank building in the world with underground vault storage, the Pavilion was constructed as a stand-alone part of the modern adjacent office building, which itself was one of San Francisco’s first post-Depression/post-World War II skyscrapers. The branch was closed in the mid-1980s and replaced by a Sharper Image retail store that was followed in turn by various other tenants—with a brokerage firm as the most recent occupant. 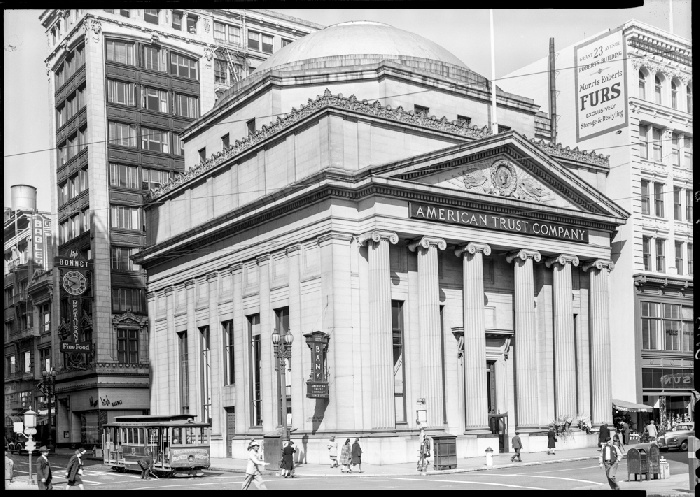 1 Grant Avenue – Built at 1 Grant Avenue in 1910 by the firm Bliss & Faville, this banking temple has housed multiple different financial institutions over the years: Savings Union Bank, American Trust Company, Security Pacific Bank and others. By the 1990s, it was home to clothing retailer Emporio Armani, and in recent times, it has been marketed as an event space, including serving as a recent temporary home to the Ice Cream Museum. Note the terminus for the O’Farrell Street cable car line (discontinued in May of 1954 and subsequently removed) at left. 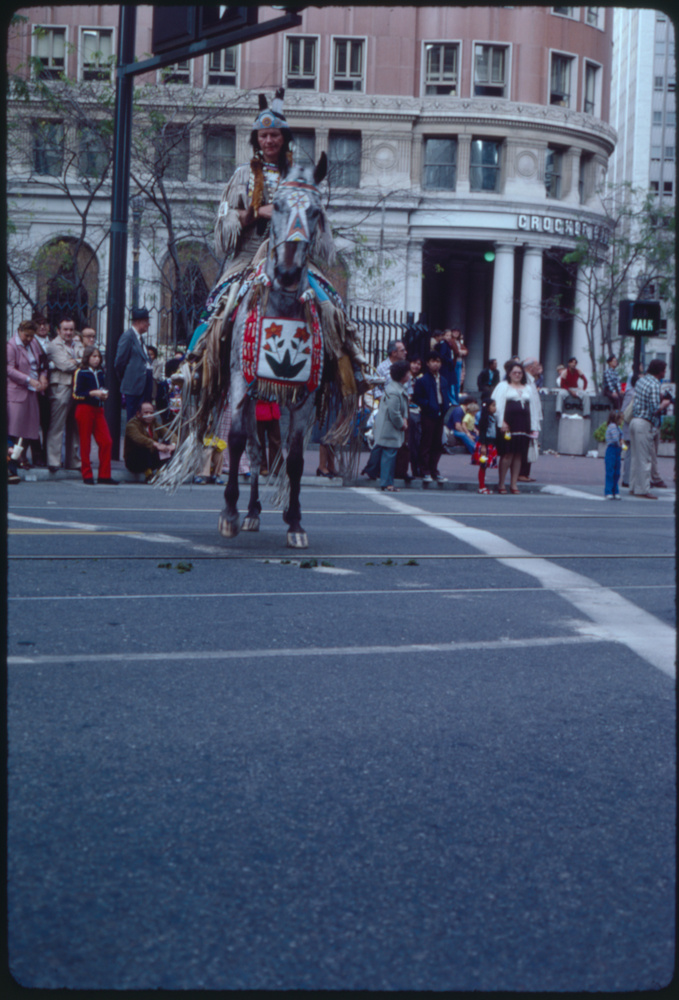 1 Montgomery Street – In 1908, architect Wills Polk designed a 12-story office tower with a ground-floor bank branch at 1 Montgomery Street for First National Bank of San Francisco, which was later acquired by Crocker Bank. In the 1960s, the sandstone exterior walls of the upper floors required maintenance, and they were re-clad in a reddish-brown marble. In 1982, an adjacent property at 120 Kearny Street was developed into a high-rise office tower with an adjacent shopping arcade known as Crocker Galleria. Part of that development included the removal of the top ten floors of 1 Montgomery with the new open space converted into a public-access roof garden. The Kearny Street tower (out of sight to the left) is now known as One Montgomery Tower, and the classic old banking temple shown here is currently vacant. See more images of the 1908 Building. 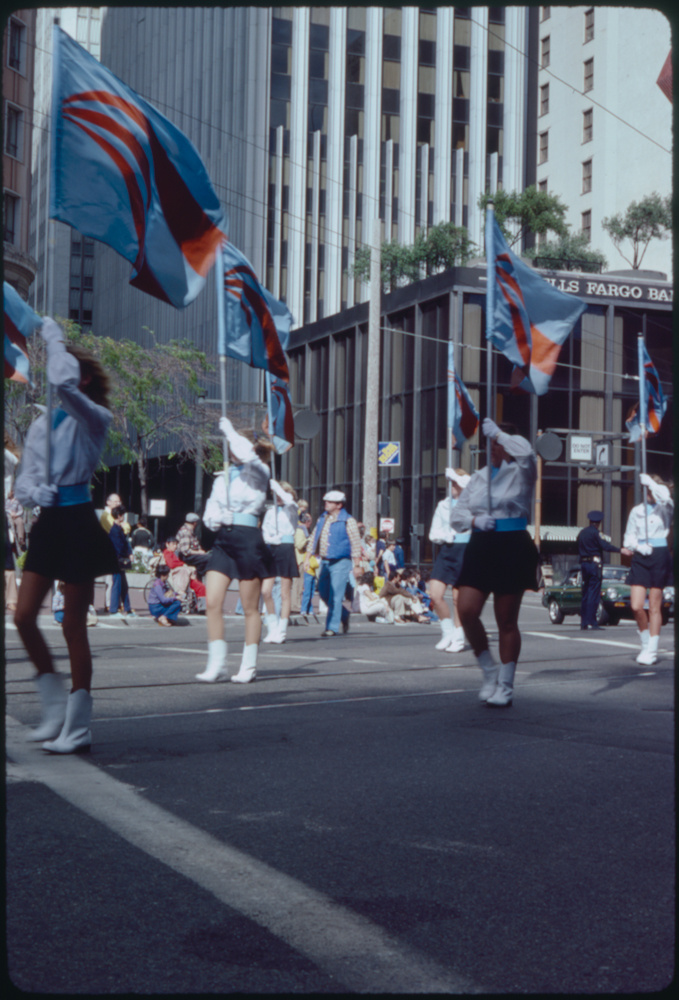 44 Montgomery Strret – Wells Fargo demolished its 12-story post-1906 building (known at various times as Wells Fargo, Union Trust, Nevada National Bank) at Market and Montgomery Streets in the 1960s, and replaced it with a modern 43-story high-rise and attached low-rise bank branch at the site, both of which opened in 1966. The location is now owned by a real estate investment firm and known as 44 Montgomery Street. The one-time Wells Fargo branch is now a brokerage office. 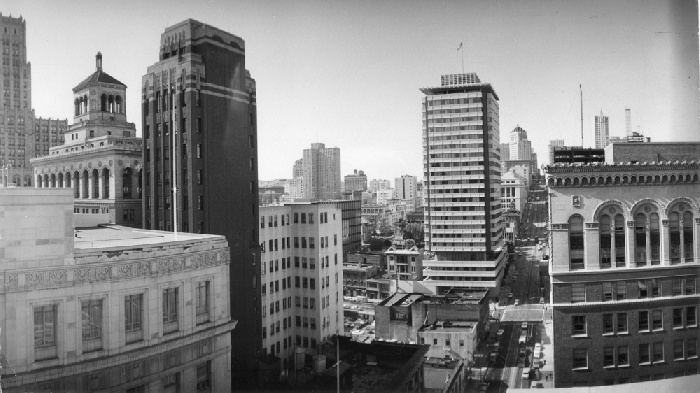 Pacific National Bank building at left-center on Montgomery near California, circa 1964. (wnp27.7186; Moulin, photographer / Courtesy of a Private Collector)

333 Montgomery Street – The construction of Bank of America’s 52-story tower at California & Kearny in 1969-70 required the demolition of several smaller buildings, the most prominent of which was the 18-story red-brick Pacific National Bank building at 333 Montgomery Street (left of center), owned by financier Louis Lurie. 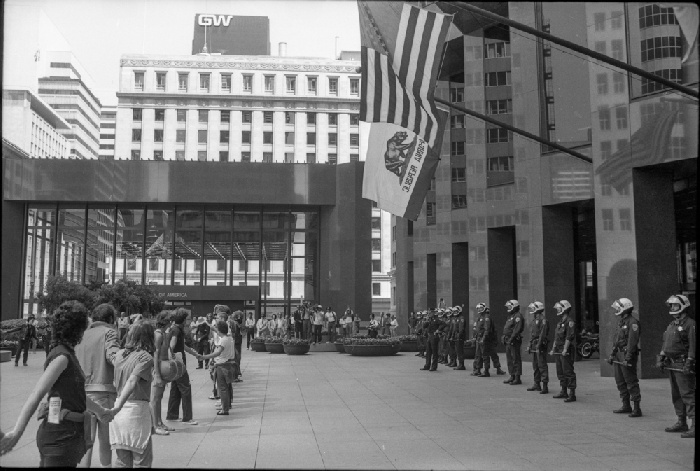 555 California Street – Bank of America’s 52-story “World Headquarters” at right was constructed in 1969-70 at California & Kearny Streets, along with a dramatic, high-ceilinged branch banking office at the corner of California & Montgomery, known as “San Francisco Main”. In the mid-1980s, the office tower was sold to a real estate firm and became known as “555 California” after Bank of America was acquired by NationsBank in 1998, which then took the Bank of America name. In recent years, Bank of America relocated its San Francisco Main Branch to smaller quarters at nearby 315 Montgomery and the marble-glass structure shown here at the far end of the plaza has been vacant and available for rent. Note the GW logo on another building in the distance—the site of Golden West Savings, which was acquired by Wachovia in 2006. Two years later, Wachovia became part of Wells Fargo. 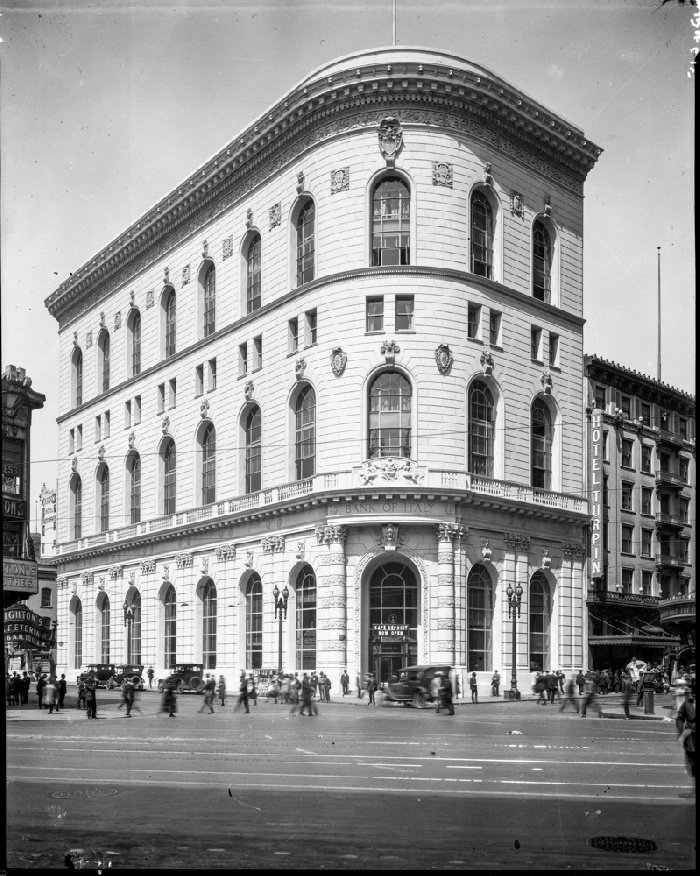 1 Powell Street – The imposing edifice at 1 Powell Street was built as the new headquarters of Bank of Italy in 1921, and re-branded as Bank of America in 1929. The Ground Floor was home to the Bank’s Day & Night branch which offered extended hours for customers until late in 20th Century, while the 2nd Floor housed the Women’s Banking Department, with an exclusively female staff that served women customers until the World War II era. For more than 40 years beginning in 1967, the upper floors were occupied by the Bank’s Travelers Cheque operations—a long-gone banking product. Early in this millennium, the ground floor was converted into retail space (telephones, clothing, and various other tenants over the years) while the upper floors are now home to 44 rental apartments. 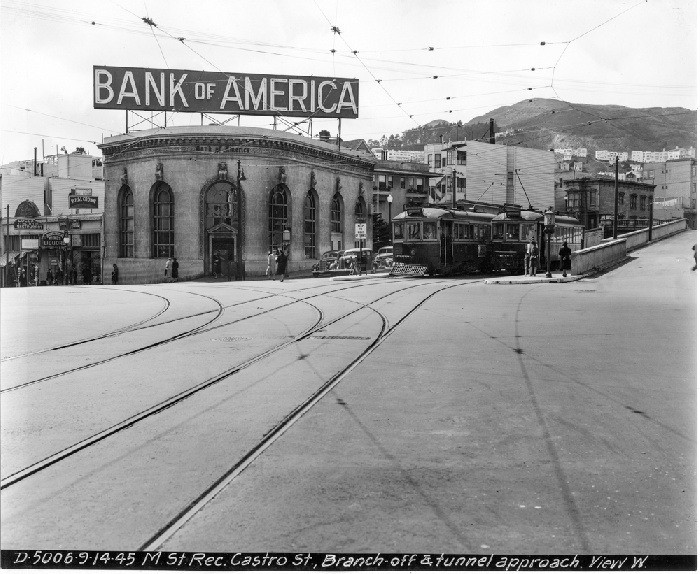 400 Castro Street – Built by Bank of Italy in 1922 in a design very similar to its building at 1 Powell Street, and then expanded after World War II (an addition marked by a 3rd set of tall arched windows to the left of the main entrance), the 400 Castro Street building has anchored the corner of Castro and Market for a full 100 years. When the old Hibernia Bank branch one block away at 18th & Castro became vacant after Bank of America acquired Security Pacific Bank in 1992 (following Security Pacific’s acquisition of Hibernia in 1988), Bank of America relocated this branch to the old Hibernia location. The rooftop signage here was always enormous, even in Bank of Italy days, until the early 1980s when Bank of America installed a much smaller sign that wrapped around the roofline. This space has since been home to multiple different retail outlets since before the turn of the millennium..

1450 Noriega Street – Hibernia Bank built one of its first branches at 1450 Noriega Street at 22nd Avenue in the Sunset District in the late 1950s, and the modern building featured an enormous detailed panorama photo of the western neighborhoods on the entire wall behind the teller line, thus fascinating the waiting customers who searched for their own homes in the image. The building later housed a branch of Security Pacific Bank after that firm’s takeover of Hibernia in 1988, and the branch was later rebranded Bank of America after that firm’s 1992 takeover of Security Pacific. The bank branch was closed in the 1990s, replaced by an ATM where the two people are standing, and the building is now home to a health clinic. Among locals, the site will forever be remembered as the location where Patty Hearst and the Symbionese Liberation Army (SLA) robbed the Hibernia Bank branch on April 15, 1974, just two months after her Berkeley kidnapping. 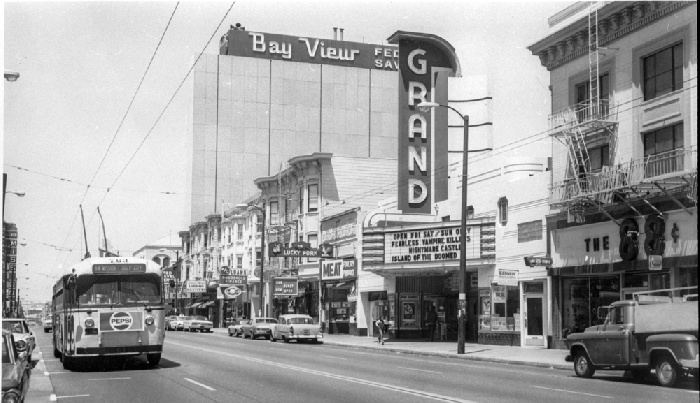 2601 Mission Street – At 2601 Mission Street, on the southwest corner of 22nd and Mission, the 9-story structure once known as the Bay View Federal Savings building—the tallest building in the area, then and now—was built as that company’s headquarters in 1962-63, thus provoking a lot of discussion about the possibility of more high-rise construction in the neighborhood. The east-facing wall (not shown here) has floor-to-ceiling windows with spectacular views toward downtown and the East Bay, while the south-facing wall was deliberately left blank—allegedly to allow for easy expansion at a later date. US Bank bought Bay View’s retail branch network in 2002, and the above structure then contained a ground floor retail branch of that institution, but it has been closed for some time, and US Bank’s signage removed from the roofline. The building’s upper floors are occupied by a mix of small business tenants, including several non-profits. As a neighborhood high-point, it is also the site of multiple cell-phone towers.